The fan- A Custom Card Anecdote 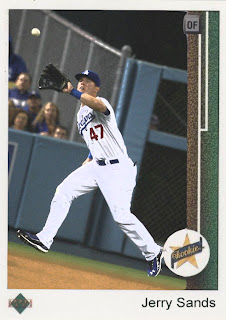 This is what people in the world of literature would call an essay. It's a long little anecdote, but it's still an interesting story about a fan, and his admiration for what I did. I made this custom back in April, and I don't know why I held it for a month in my files. But being that the most famous wish-granter in the modern world of Entertainment will be leaving her show next week, I felt like I needed to share my own Oprah moment. So let's travel back to the beginning of this story.

Somewhere around New Year's Day this past year, I got an email from a fan. It wasn't a trade email, it wasn't an "upcoming blog, please put me on your linkbar" kinda thing. It was a fan of my custom cards. I don't get that a lot, other than the constant little "awesome job" messages you guys leave in the comments. This fan was a Dodger fan living in Idaho, a place with no real local baseball team to root for. He first asked me for all the Dodger customs I've made, which was easy to send. Then he asked me if I made any cards at "reader request". I, of course, answered yes, saying that requests are part of what I do.

About a day later, he sent me another email with a bunch of requests for customs on it. These requests were kind of tricky to do, but I reassured the fan I'd give it a try. One of the most intriguing requests I got was a Jerry Sands custom in the form of a 1987 card (including a rookie cup). At that point I hadn't heard of Jerry Sands, and had no idea how I'd make a custom of him, but I said that I'd see what I could do.

A week passed, and I hadn't even begun working on the customs. This might have been caused by A)- The difficulty and amount of requests, B)- The fact that in January I wasn't in the mood for custom making, and C)- The fact that January was being January, and Winter Break was about to end. A week after the first email, the fan sent me another one, apologizing for sending so many. And I was horrified. Not just at the fact that he had to apologize to me when he hadn't done anything wrong. I was horrified at the fact that I had let one of my only fans down. So I responded to the email, saying that it was absolutely fine, that it was my fault, and that the customs would be sent soon. After that, school was back into swing, and my life caved in on the project.

By mid-April, I had nearly forgotten about the fan's request. Then, he sent me another email, this time forgiving the lack of response to his request. He still felt that my customs were awesome, and despite the rough start on Los Angeles' part, still wanted to see more Dodger customs. He also said that if I was looking for a subject for a next card, that Jerry Sands was the huge up-and-coming prospect, and that he'll be big soon.

I was happy that he hadn't abandoned me for procrastinating on his request. I sent him a few of the Dodger customs I had made this year already, and promised that when Jerry Sands pictures are featured across the internet, there would be no doubt that he'd be customized. And within 6 hours, I found Jerry Sands photos, from his debut. And I found the perfect action shot. So I used a Ken Griffey Jr. rookie card as the base, and whipped up the perfect custom. I proudly sent it to the fan, awaiting a response.

Well, he loved it. He reported that it was the wallpaper on his computer, and that he would remain to be a loyal fan in the future. And that made me proud to do what I do. I started out blogging for fun, and the only people reading it was just myself and a friend. Now, I have fans and people wanting trades, and I feel I've done a full 360 from 2 years ago.
Posted by Jordan at 7:24 PM