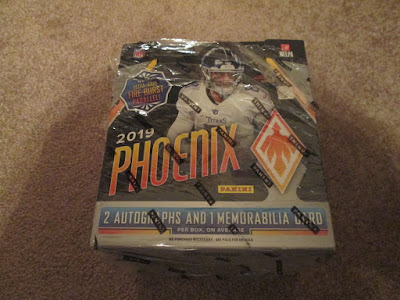 My anonymous contact doesn't really gauge whether or not I'm a premium collector. Because, I'm really not. Game-used cards and autographs are nice and all, but I love a good base design, and I'm fine with good, low-seeded inserts and numbered cards. I'm not gonna go wild if I pull a relic/auto that isn't up to par.

Phoenix is definitely a more premium set. I don't recall having seen much Phoenix at my local Wal-Mart, though I haven't exactly been looking at the football displays. This is definitely a wilder, sleeker set, and...I mean, I'm not NOT gonna open it. Come on. 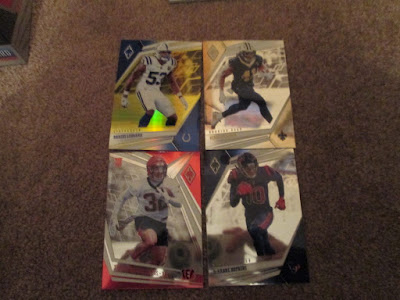 Pack 1- This is the base set. Pretty swanky. This is kinda similar to Topps Finest, I think? I don't know how the Panini breakdown compares to Topps'
As you can see, the parallels are easy to get in this product, as I pulled a gold one of the Colts' Darius Leonard, #'d to 75. In terms of age, we're dealing with Alvin Kamara and DeAndre Hopkins, as well as the Bengals' Trayveon Williams, who hasn't gotten a great deal of playing time yet. 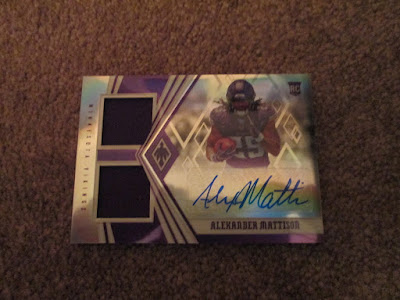 The first pack also held my first hit, and, uh...yeah. That's not a subtle hit. TWO swatches of purple jersey, and a (sticker) autograph of Vikings RB Alexander Mattison, a 3rd round pick. This isn't a BAD hit, as he's played in all 9 games for the Vikings this year despite not starting, but he's beginning to get some playing time, and is making some nice appearances even as a rookie backup. So...not a GREAT hit, but could have been worse. 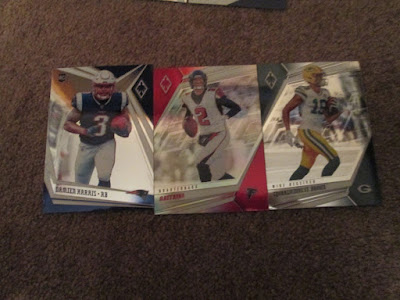 Pack 2-Matt Ryan and Equanimeous St. Brown are the veteran base, even though St. Brown has been  injured all year. Ryan's card is slightly refractor-y. Damien Harris is the RC, and he has appeared in all of 2 games so far for New England. 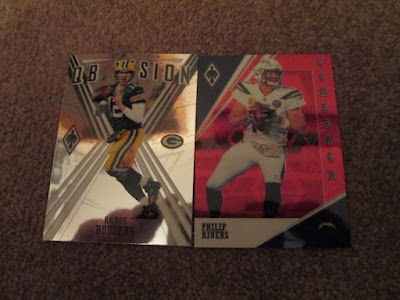 Some QB mojo, though. Aaron Rodgers is my QB vision insert, which look very cool, and Philip Rivers is a red Comeback parallel #'d to 299. 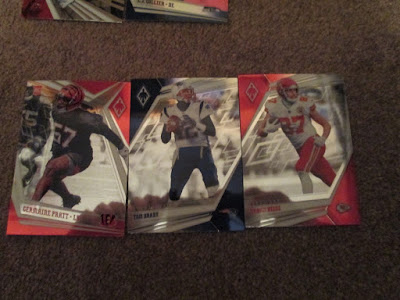 Pack 3- Tom Brady and Travis Kelce are my base stars. Germaine Pratt, a Bengals 3rd-rounder LB who has made appearances in 8 games, is my rookie. 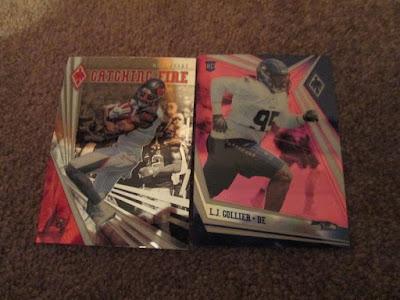 And my specialty cards- Mike Evans is my Catching Fire insert, and man do those look cool. LJ Collier, a Seahawks rookie who's been sporadically appearing in games, is a pink parallel #'d to 199. 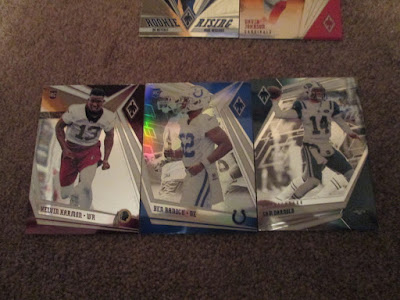 Pack 4- Sam Darnold is my only non-rookie here, as we have base cards of Ben Banogu, defensive end bench guy for Indianapolis, and Kelvin Harmon, a Washington receiver who's been getting more and more starts solely because he's playing for the Redskins. 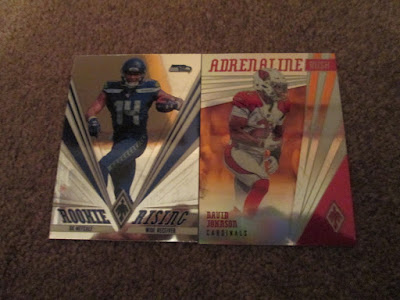 My Rookie Rising insert is of DJ Metcalf, which in hindsight is a pretty nice pull, and my Adrenaline parallel is of David Johnson on Arizona, #'d to 99. 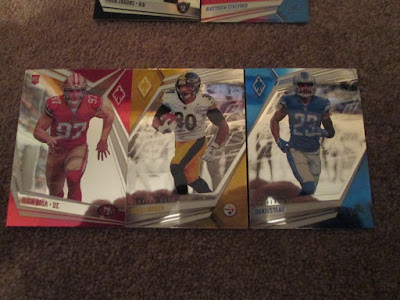 Pack 5- A pretty big rookie to get in Nick Bosa, the 49ers' 1st round pick who's been having some big-game moments for them. So that's nice. James Conner and Darius Slay are the other base cards. 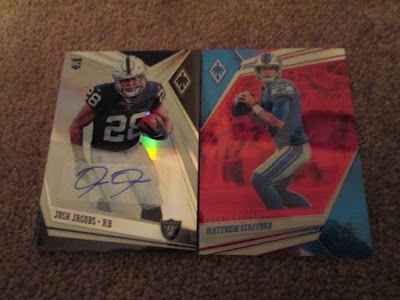 As for the first auto, I think I did really well here. Josh Jacobs, according to my Raider fan dad, might be rookie of the year. He's definitely looking at a 1500 yard season, and he's already had three 2-TD games. So he's definitely off to a nice start. Glad I pulled an auto of him.
And Matt Stafford's red parallel is numbered to 299. 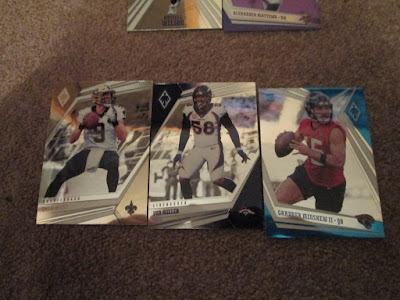 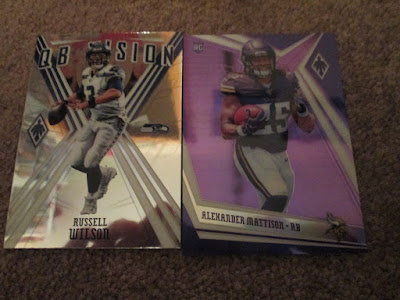 My Seahawks streak in this box continues with a QB Vision of #12's hero, Russell Wilson. And Alexander Mattison returns yet again for a purple base parallel, fittingly enough, numbered to 149. 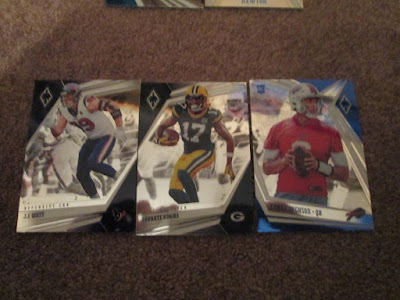 Pack 7- JJ Watt and Davante Adams are great base gets, but considering that he has no Bills stats, and was cut after losing the QB gig to Josh Allen, Tyree Jackson isn't a great inclusion in this set. 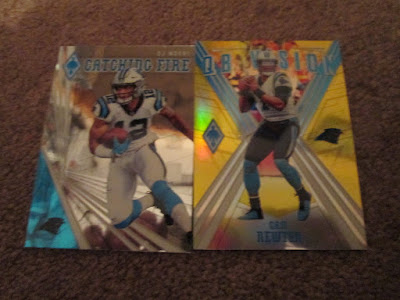 The Panthers got some love in this pack, with a Catching Fire insert of DJ Moore, and a Gold QB Vision parallel of Cam Newton, numbered to 75. 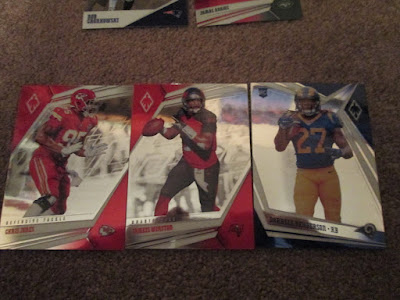 Pack 8- Chris Jones, Jameis Winston, and slowly rising rookie running back Darrell Henderson, of the Rams, are my base cards. 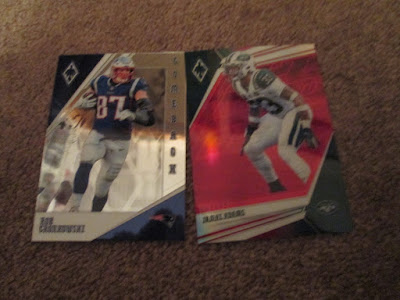 Despite Gronk's retirement, Panini kept making cards of him, including this COMEBACK insert, which isn't as misguided as another Comeback we'll get to in a it. And Jamal Adams is my red parallel, #'d to 299. 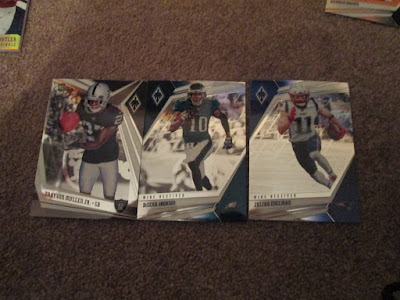 Pack 9- DeSean "No, it's not still hurting, I swear" Jackson and Julian Edelman are my star base, while Trayvon Mullen, who's getting more and more starts at CB in Oakland, is my rookie. 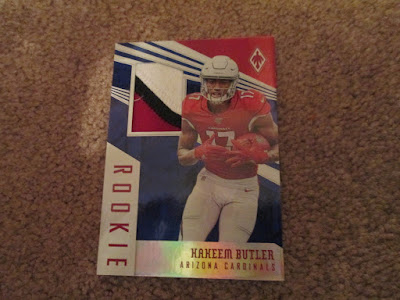 This is my second game used, which I'll gladly take in lieu of another sticker auto. Cardinals WR Hakeem Butler, who's been injured all year, has this SWEET JERSEY SWATCH here. Not THE greatest player selection for a hit, but that swatch is awesome.AND the card's numbered to 35. But that's not the weirdest takeaway from this pack. 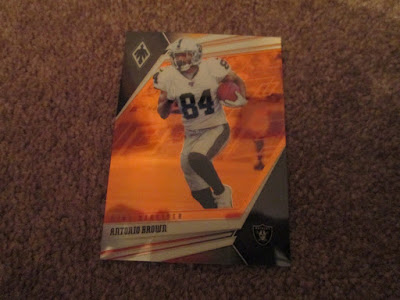 Antonio Brown as a Raider. A team he would never play for. Orange parallel, numbered to 99. This is such an odd mojo card to pull, because it's technically a zero-year card, and it's of a much-maligned NFL figure like Brown. It's just...odd. 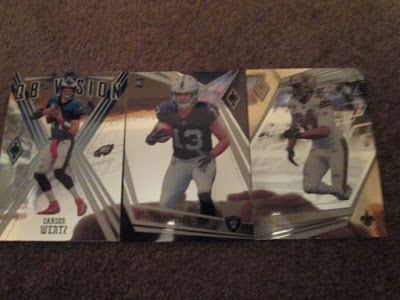 Pack 10- A base card of Cameron Jordan, a rookie base of Raiders backup WR Hunter Renfroe, and a QB Vision of hometown hero Carson Wentz. 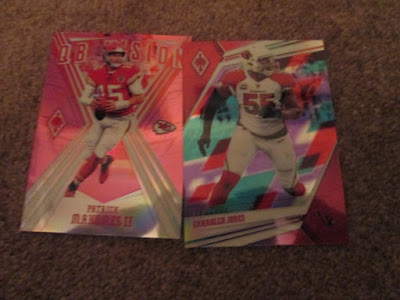 That Pat Mahomes QB Vision is a pink, #'d to 199, parallel, while Chandler Jones' is an unnumbered, flame parallel. 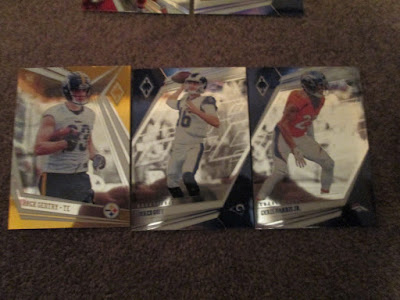 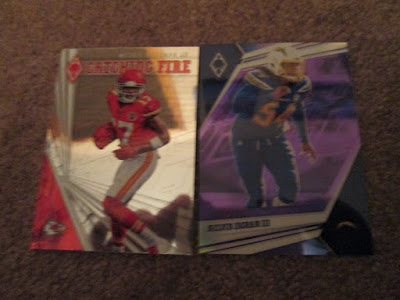 My Catching Fire insert is of Mecole Hardman, and Melvin Ingram is my purple parallel, #'d to 149. 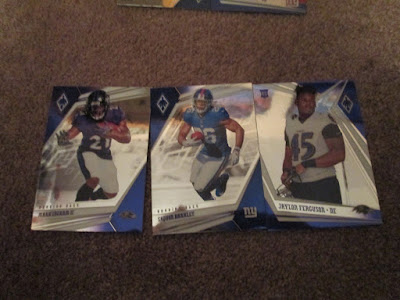 Pack 12- Saquon Barkley and Mark Ingram are my base, along with up-and-coming Ravens DE Jaylon Ferguson. 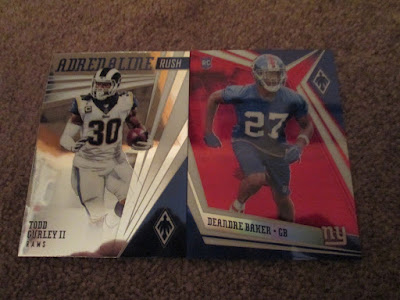 And my final standouts are an Adrenaline Rush insert of Todd Gurley, and a red parallel, #'d to 299, of star rookie Giants cornerback Deandre Baker.

Not a bad box of this. My hits were decent, the parallels are cool, and there's a lot of cool, fun ideas in this set, even though it's not exactly something I'd get with my own money. I enjoyed breaking it.

Again, if anybody wants any specific cards from these football breaks, as I don't really collect this sport thoroughly, let me know. I'm trying to do more trading, even if it makes me kinda anxious. This is a good start, though.

Tomorrow, or at least soon, you'll seen Part 1 of the second box, Panini Prism. It's...alright.
Posted by Jordan at 3:44 PM