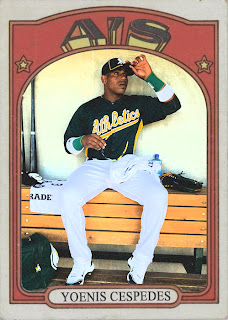 2012 is a big year for prospects. There are dozens of Japanese prospects landing on American teams, and of course, there's the big three: Darvish, Cespedes and Harper. While Harper seems to look like the next Babe Ruth (or the next Cory Snyder), Cespedes is surprisingly taking a low profile in Spring Training so far. The question right now is: why? He's a monster at the plate, and has made an impact on Cuban Baseball.

And as he bats strongly for the Oakland A's, a team that hasn't been to a World Series since before his birth most likely, people are gonna take notice. For one thing, the team just purged all its big stars except Brandon McCarthy and Kurt Suzuki. And after gobbling up free agents like Cespedes and Manny Ramirez, it will be an interesting team to watch.

And Cespedes: if he keeps hitting, the rest of the country will take note.

Coming Tomorrow- I always feared he'd leave his team, due to their tendency to unload all stars at the deadline. But he's still here, and he's the team's star.
Posted by Jordan at 6:58 AM