On Mental Health, Baseball Cards, and Holding On

Right. In honor of the drought in between playoff games, let's get serious.

I've been blogging for ten years, going on eleven. When I got into writing this blog, I was 13. And I'll admit it was very odd for a little while to be a young kid interacting with a lot of older collectors. Cause, you know, a kid's perspective can only get you so far, and you only know so much about the world when you're a kid.

I'm 23 now. I feel as though I'm still one of the younger members of this community (though I've seen people my age, like Drew from drewscards, come and go), but I definitely know a lot more about how the world works. Since starting the blog, I've graduated from high school and college, started my first professional job, and come to terms with my own anxiety and depression. Now, one year post-college, and in arguably the toughest stage of my life, it's been harder to keep everything stable. This is the first time in my life where I'm bowling without bumpers, in a sense- I've been on a track for most of my life, and now I'm figuring things out on my own, though still living at home, and it's a lot tougher.

I'd like to say that collecting cards helps, but...I look at where everything is now, and I compare it to where it was when I started collecting in 2007. And I ask myself, very plainly- would I start collecting if I got into it now, rather than in '07? And look, say what you want about the 2007 Topps flagship design, or gimmicked rookies or whatever, but there was more variety then, and there was more risk-taking then, than there is in current baseball card products. Now everything feels more homogenized, safer, and less genuine.

I'm not saying I'm done collecting. Far from it. It's one of the safest addictions a person can have, and it's still one of the few constants in my life. But, I'll admit that with current cardboard, it gets harder and harder to find things to write about, or something solid to say. I contemplated doing a post this year about how broken Update Series is, but that's a post I've written before. I don't wanna go in circles with the blog.

Perhaps there's more to say about older cards? I might do more Nostalgic Box Breaks in the future, but even then it takes energy to label every photo and space the posts out so they get the right traffic.

There's a point to this, I swear to God.


In case nobody's told you this before, it's not a sign of weakness to ask for help. In any capacity. I struggled with this for years, because of some weird, misplaced pride kind of thing, and I still struggle, but...I'm learning. I see a therapist, as one does. I've been working with the guy for a few years, and it's one of those things where my old one left the practice so this one got assigned to me, and it's still a little fresh, but...he understands. He works with a lot of people who deal with a lot of other things, and as someone with a high-functioning neurological disorder, I'm probably a bit of a relief for him. Not to gloat or anything.

Anyway, we're talking today. And he asks me what I do to relax. And I bring up the fact that most of my house is lined with baseball cards, and I collect those and organize them. And as I bring up something else, he holds up a finger. "Hold on."

And he went to get a large, shoebox-type thing, and I'm already going "you're kidding me."

Don't worry, the whole box wasn't baseball cards. I can guess that some of the other people he works with need tactile enforcement or something like that, because the box had a disorganized mess of trading cards. But not like Pokemon or anything current. This was stuff my therapist must have grown up with. Old Batman cards, or picture cards, or one or two basketball stickers, or a rare Michael Jordan Hanes oddball set that came out in the 2000s. And he leafed through, saying "I think there's a few baseball ones in here." 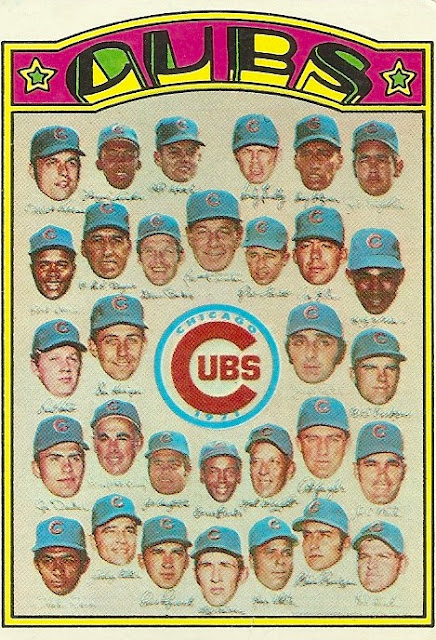 Yeah. I had a similar reaction.

Of all places to find 1972 Topps cards, you don't expect to find them in a therapist's office. There were only a few baseball ones in there, and they were all 1972 Topps. I clarified, and asked if he actually meant that I should take them, and he said 'of course'.

Better in someone's collection than sitting in a box to be handled by people that don't appreciate them, I guess.

Looking through all these, I noticed how...atypical, ironically, these cards were, especially as specimens of the 1972 set. This one, for instance, is the only team-photo card from this set that isn't a posed shot, due to stadium concern issues I believe. I can only imagine people looking through this box unfamiliar with baseball, looking at the floating heads of the 1971 Chicago Cubs looking back at them, including Joe Pepitone, Billy Williams, Ken Holtzman, Ron Santo and Ernie Banks. 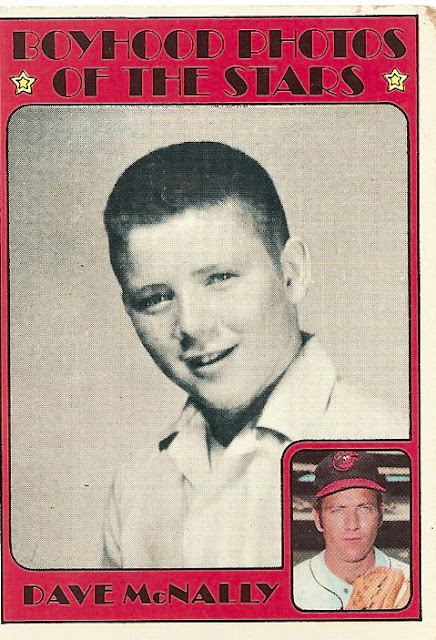 Perhaps this was the point. Perhaps these cards weren't meant to be normal cards, or base models of anything. Perhaps they were meant to spark interest in people who were doing their best to grasp concepts.

The rest of these cards were all from the infamous Boyhood Photos subset from 1972. Which I also found interesting. Maybe they were thrown in because younger clients could see something tactile, something about growth. See this young kid in a button up? One day he turned into a 4-time 20-game winner and World Series hero. It can happen to you too. 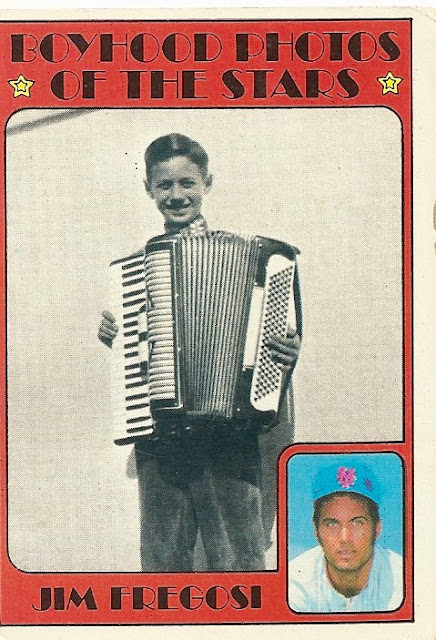 Fregosi's better known for being the piece that got Nolan Ryan out of Queens. I honestly think he should be better known for this card. We need more cards with accordions on them. Get Flansburgh & Linnell to do a designer-set like Christie Brinkley and VJ Lovero did, and have 'em all carry accordions. 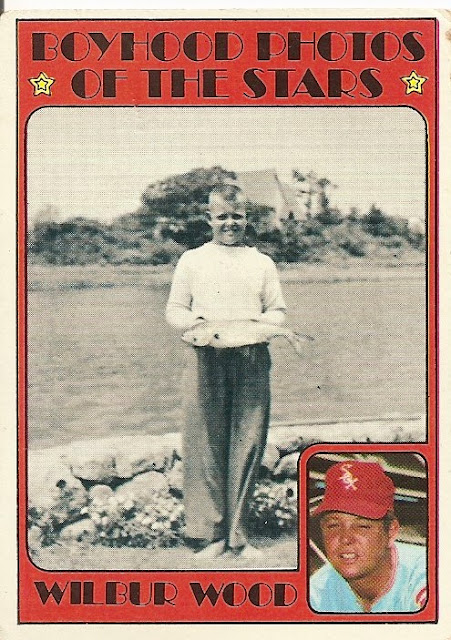 Maybe my therapist was trying to convey to people that some people don't change completely. Look at Wilbur Wood. By 1972, I imagine he was no longer a master fisherman, and I imagine he had a different sense of pants fashion, but he still has the same face. He's still the same person, no matter what exteriors, or interiors, have changed. 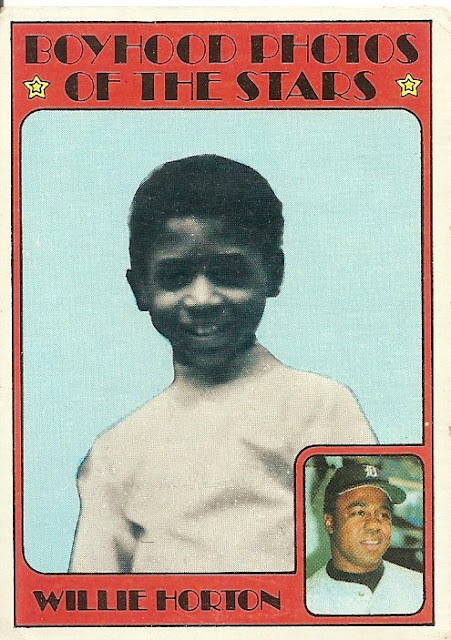 Willie Horton falls into the category of 'team hero that never gets enough credit outside of his one city'. That city is Detroit, and they love him there, as he's a Tiger HOFer, and I believe his number might have been retired. But you don't see many sportswriters talking about Willie Horton these days.

Sometimes you just find your circles, I guess. You look for the people that love you and want to hear from you. Horton's is Detroit. The blogosphere might be mine. 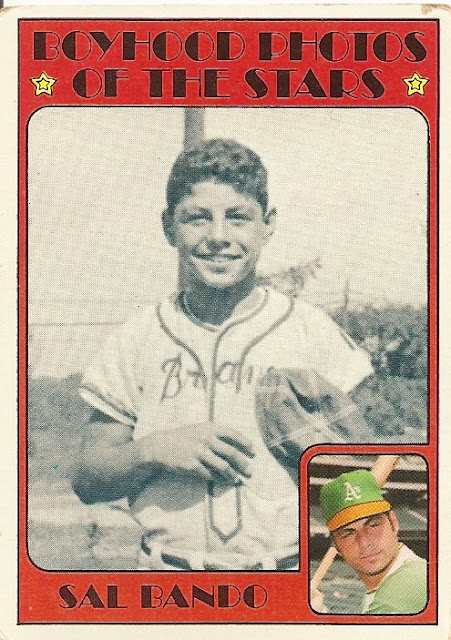 You wouldn't think it, but these cards aren't in the worst condition, either. Granted, some are kinda bent, and some corners are kinda dinged, but compared to other more loved cards I've seen (there was a 75 mini in this box with a HUGE tear through its middle), they're fine. With 45+ year old cards, you take what you can, and if these were lying in a vintage dollar box at a card show, I'd certainly pick them up. Especially considering how rarely I see these subset cards, or just Sal Bando cards in general. 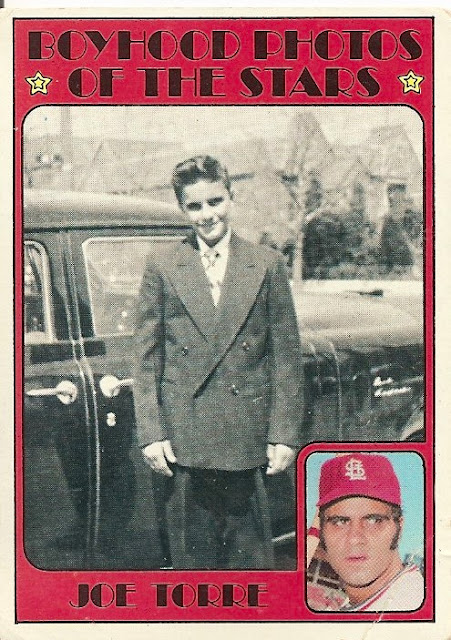 There were a few draws in this, as if I cared about those. Like Joe Torre's snazzy little suit here. Not sure what aged worse, the suit or the sideburns. Of course, the story is clear from '72- Torre bobs around for a few more years, becomes a player-manager with the Mets, gets bit managing jobs here and there, then gets the Yankees gig and becomes a Hall of Famer by winning 4 titles in 6 seasons.

A lesson I could take from that? Not every great opportunity happens early in life. Frank Langella has the story of seeing a fortune teller when he was in his 20s, and the fortune teller saying that he'd achieve his greatest success late in life, and Langella admitting "I thought she meant 40". True success comes to those who are patient, and those who are determined to achieve it themselves. I realize I might have to wait a little longer for my success, but...I'll be here for a while, I reckon. 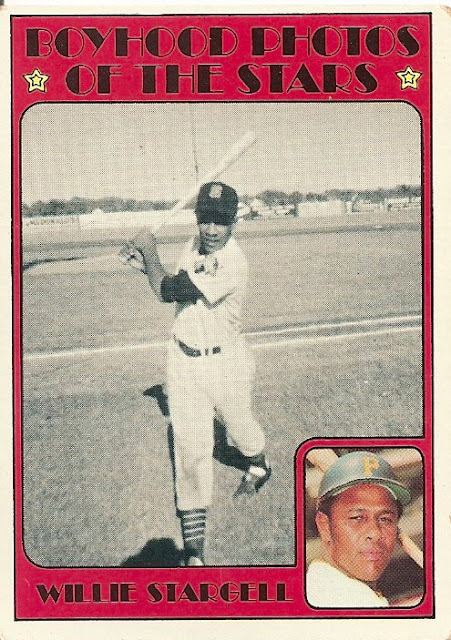 This was the shock to me. It made sense, but it was a shock.

It made sense because it wasn't the first time I'd seen a Stargell vintage card in the wild. Years ago, looking through my friend's brother's binders, mostly from 2000, 2001, that era...I looked into one and I saw what was clearly a Willie Stargell 1966 Topps issue, which probably came from his Cleveland-sports-loving father. It seemed odd that someone so junk-wax based would just have one vintage HOFer in there.

It also made sense because another therapist I'd had at this practice, who'd also since retired, was a Pittsburgh Pirates lifer, and told me about first-hand memories of the 1960 team, and going back to meet members of the team for the 50th anniversary and meeting Bill Mazeroski and everybody. And talked about Three Rivers Stadium, especially in comparison to PNC Park.

So of course Willie Stargell was hiding amidst these other cards, waiting for someone who'd appreciate him. Which is an odd concept- Stargell, one of the nicest players to walk the fields, waiting for appreciation.

I also find it weird that, out of all of these, Stargell's old photo is the only one where he's holding a bat, in full baseball regalia. Yes, Bando's got a glove, but his is static. This is, while posed, an active shot of a future legend in action. Sometimes ability like that can be apparent from the beginning.


I don't know how many fingerprints are on these cards, or how long they've been in a therapist's office, or if the other people who'd seen those cards are any better or any happier than they were before, but...it's not my place to wonder that. All I can control is where I go from here, and how I cope with this...admittedly dormant stage of my life.


Once the World Series ends, I'm gonna try to do more basic posts about cards. Nostalgic Box Breaks, card prompts, custom subsets, or just...looking at some cards, and talking about them. I wanna write more clear, thought-out stuff on the blog, rather than just saying 'hey, here's some pictures and mediocre analysis, have at 'em'.

A post I intend on writing soon is another one involving anxiety, about the general anxiety behind trading through the mail. If you liked this one, you'll probably enjoy that one as well.

If you've made it this far, not just in this post but also from when you started reading my blog in general, thank you. I really appreciate it. I hope you like where I'm going with the blog next.
Posted by Jordan at 2:59 PM

Labels: 1972, damn this guy can actually write!, editorial, in all seriousness