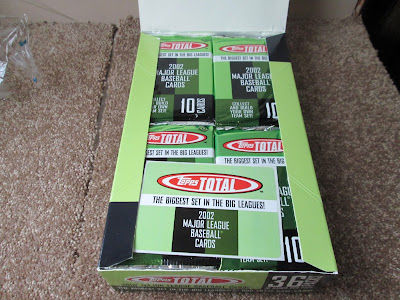 Here now, the last 9 packs of a very nostalgic and interesting box of 2002 Topps Total. Expect more Nostalgic Box Breaks to follow until we get baseball back. 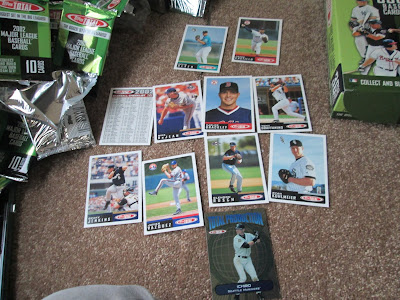 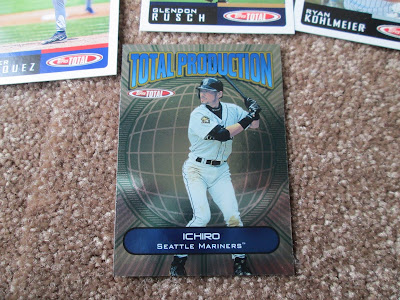 A very cool Total Production insert of Ichiro, in his second year (of 19). Ichiro might be one of those guys in contemporary baseball where you can't possibly be mad at pulling a card of them. There are very few people who fall into that category (Jackie Robinson, Roberto Clemente, Bo Jackson), and Ichiro's gotta be a charter member, despite his Yankee tenure. 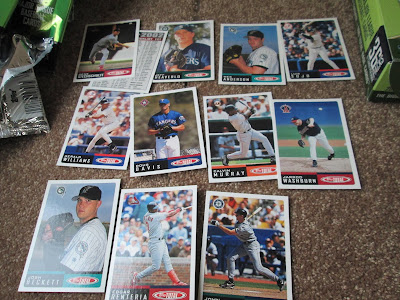 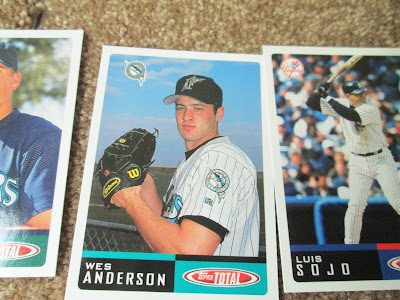 It's 2002, and I don't think Marlins prospect Wes Anderson had to disambiguate often. Give him 10 years and then he probably has to specify. 'No, I'm not the director, I'm just a forgotten former Marlins pitcher'.
Also, nice of Topps to give journeyman infielder Luis Sojo a sunset card. 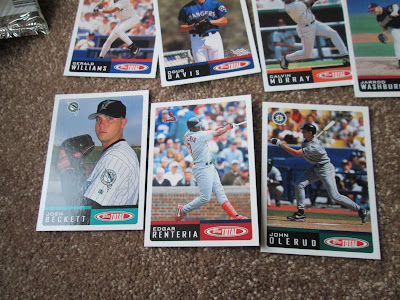 Three very good players that are fun enough for fringe collectors to take upon. I still collect Beckett, and every once in a while I'll ponder if it's worth it to do Olerud. 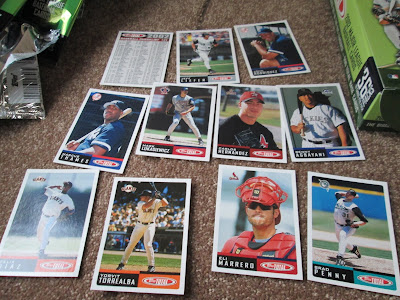 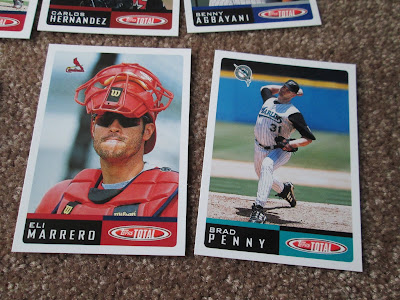 Not much to report in this one, so here's a great mask shot of Eli Marrero and a solid shot of Brad Penny before he got big. 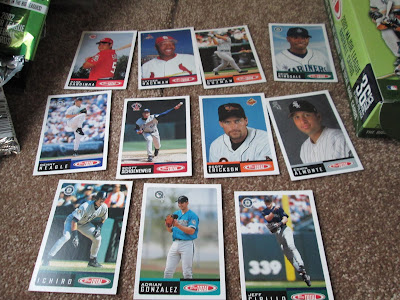 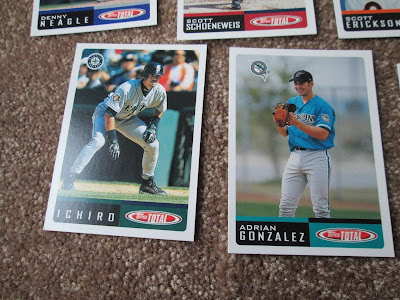 Ichiro's is the base, though it could be the checklist. Adrian's is technically a rookie. With Adrian, anything from 2000 to 2005 can be considered a rookie, because he didn't really start PLAYING-playing until 2005 or 2006. So all his Marlins issues are fun Pre-RCs, and I love pulling them. This is not TECHNICALLY his rookie, as he has 2000 issues, but...it's still a nice one. 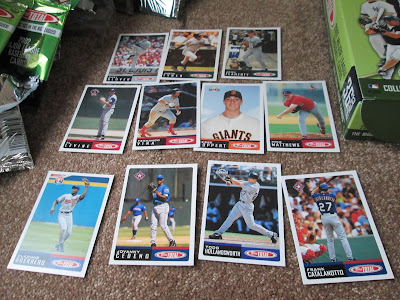 Pack 32- Wasn't a great deal in this one. Fernando Vina? Frank Catalanotto? 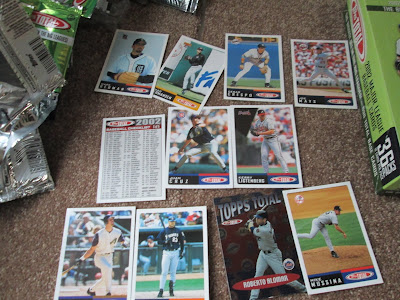 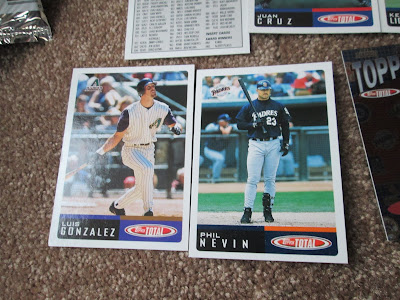 Luis Gonzalez was coming off his HUGE 2001 and his W.S. win.
Phil Nevin was just coming into his own as a Padres mainstay, which says a lot about the 2000s Padres 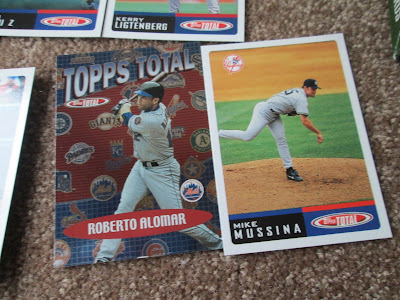 Robby Alomar was starting his tenure in Queens, a tenure that would not be very well remembered whatsoever, but this Topps Total insert looks cool.
MOOOOOOOSE. This was only his second year in the Bronx, and he was still killing it. 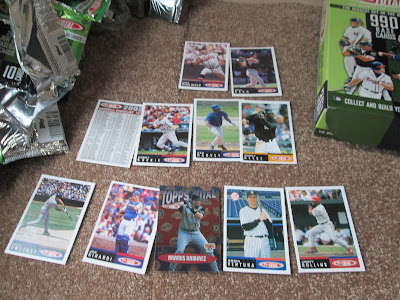 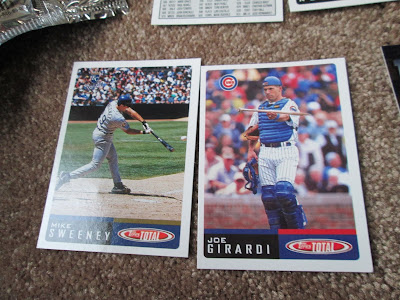 Mike Sweeney was just coming into his own as the requisite power hitter in KC. Joe Girardi's career was winding down, but he was still starting games in Chicago. 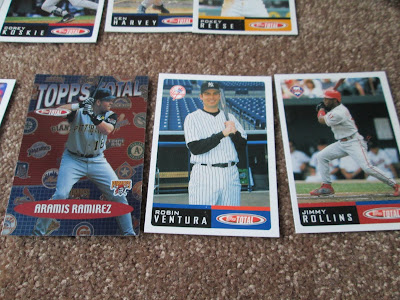 Our Topps Total insert is Aramis Ramirez, soon to be traded to Chicago. I'm still a fan of Robin V as a Yankee cards, as it's a very underrated, short tenure. And J-Rol is awesome, so I love pulling his cards as well. 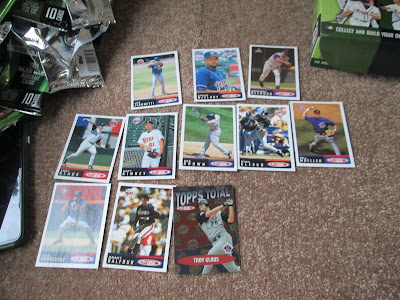 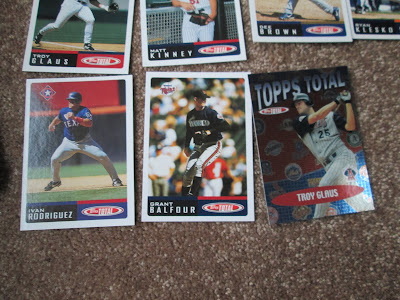 The Pudge is a cool one, as that's his last year in Texas til 2009. That's Grant Balfour's rookie, and that's a a Futures Game uniform, which is hella cool. And a Topps Total insert of Troy Glaus. 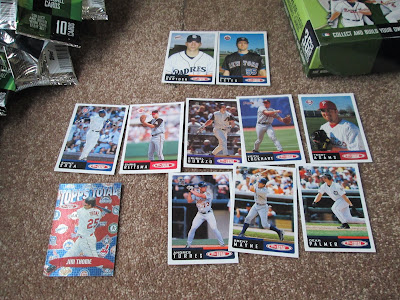 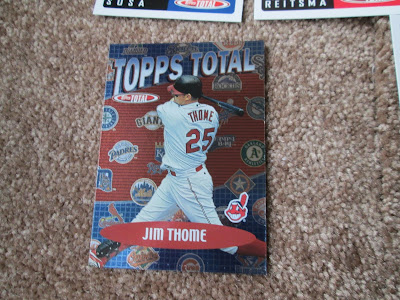 Gotta end on Thome. Dude was a hero of mine in Philly. This is a cool enough insert of Jim Thome to end the box on.

So, that was 2002 Topps Total. It's a fun rip, and you get a lot of fringe guys and uniform combos you don't see often, well-seeded inserts and ample hero cards. But, if you're a set collector, one box won't do it for Total. I feel like I pulled like a third of the base set? I dunno. 360 cards? And it's a 1000 card set. So if you have enough to buy 3 boxes, then MAYBE you'll have a base set. Or...probably more.

Still, it's a cool break. I got what I wanted out of it.