The Real Custom Card of the Day 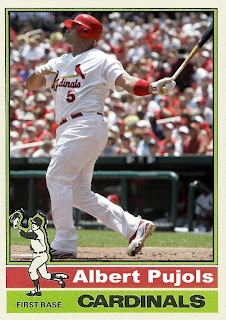 You know I wouldn't let you down. You knew that even though I had no time yesterday, I could still crank out a custom Albert today. Overall, this was one of the harder ones, being that there was a little player in the bottom left corner. Oh, well. Still a pretty good card.

Today, I will be awaiting the return of the oldest pitcher in the game to starting. That's right- Jamie "Why am I still playing" Moyer will be starting today's game. Seriously, this is getting worse than Darrell Hammond on SNL. Jamie, you're a great player, you're a possible HOF candidate, but please, go home already! You've pitched beautifully. Just ask the Cubs, Rangers, Cardinals, Mariners and Phillies. But you've done enough. You're 47. Mike Piazza is 41 and yet he's not playing. Julio Franco is 51, but no one told him there was a door out of the MLB. My point is this- Jamie Moyer has made his mark on the game of Baseball. He just needs to retire before that mark becomes a rip.

Two records were broken yesterday. Ichiro became the 2nd fastest to hit 2000 hits. Wow! The guy has been playing 9 seasons and he's already hit 2000 hits. Of course, it took Alex Rodriguez 9 years to get to 450 Home Runs, so...

The other record, is that the Pirates have had 17 straight losing seasons. Hmm, and why might that be? Ask Barry Bonds. Ask Jason Kendall. Ask Brian Giles and Jason Bay. Ask anyone who grew up playing for Pittsburgh and ended their career with their loyalty snapped and their playing ability wasted. The pirates can't afford to resign anyone big, and that's why Jack Wilson, Freddy Sanchez, Tom Gorzellany and Nyjer Morgan all went to other teams this past season. I say move the team to another state, one with more money. One that actually has fans that can go to its games. Like...NEW JERSEY!!!
Posted by Jordan at 3:22 PM