Topps Cards That Should Have Been: 2004 Fred McGriff 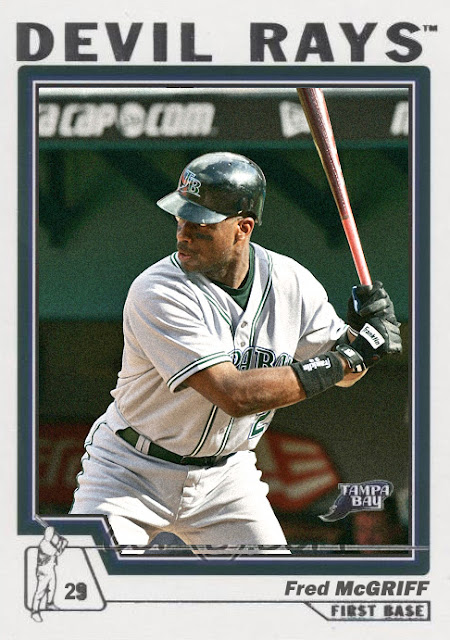 I am still firm in my belief that Fred McGriff should be a Hall of Famer. And if so, this would have been his final Topps card. Not that the Dodgers one we got in 2004 was bad, it was just outdated.

Fred McGriff's 2003 would have been a fine way to go out. After a year and a half doing well for the Cubs, McGriff signed with the Dodgers, ironically the same offseason Eric Karros signed with the Cubs. McGriff only played 86 games in 2003, hit .249 with 13 home runs. Not a great deal went on, and McGriff was let loose after the season ended.

But the longtime hard-hitter was picked up in 2004, by the team he had returned to greatness with, the Tampa Bay Rays. McGriff was the first superstar in Tampa, the first All-Star in Tampa, and was the flagship hero there until the 2001 trade to Chicago. So of course they'd welcome him back and give him a shot at making the team out of Spring Training. McGriff was 40, but he still wanted to play.

The eventual MLB gig for McGriff in 2004 was a bit disappointing. In 27 games, the Crime Dog only hit .181 with 7 RBIs and the final two of his trademark home runs. McGriff was released midseason, retired, and that was the end of that. I do appreciate that his last games were played for the Rays, as it's a very poetic close to his career, but I just wish they'd have been a bit better.

Labels: 2004, Custom Cards, Fred McGriff, Rays, Topps Cards That Should Have Been