Topps Cards That Should Have Been: Curtis Granderson in the Late 2010s 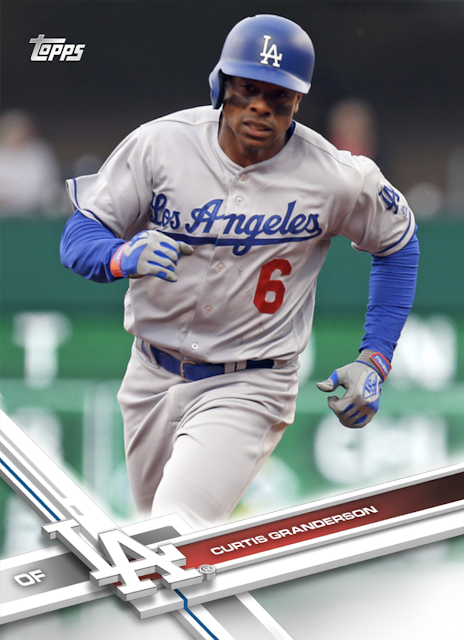 Two separate years, one of my favorite players gets traded late in the season and Topps just throws up their hands and shrugs.

The first one happened at the 2017 waiver deal deadline, which means there was no chance in hell of it getting into Update, as Topps was paving room for even more filler rather than actually depicting traded players.

Curtis Granderson was having a down year on the last year of his 4-year Mets contract. In 111 games, Grandy was hitting .228 with 52 strikeouts and only 19 homers. So he was traded to the playoff-bound Dodgers, in exchange for mediocre bullpen piece Jacob Rhame.

In 36 games with the Dodgers, Grandy only hit .161 with 12 RBIs and 7 home runs. Yes, the power numbers were great, but his average was continuing to plummet. He did play some games during LA's postseason run, but only got 1 hit in 15 at-bats.

2018 was an improvement for Granderson, as he had a fantastic start with the Blue Jays, including a 6-RBI game against Baltimore [that I was lucky enough to attend]. But, as the Jays weren't competing, he was dealt at the waiver deadline once again... 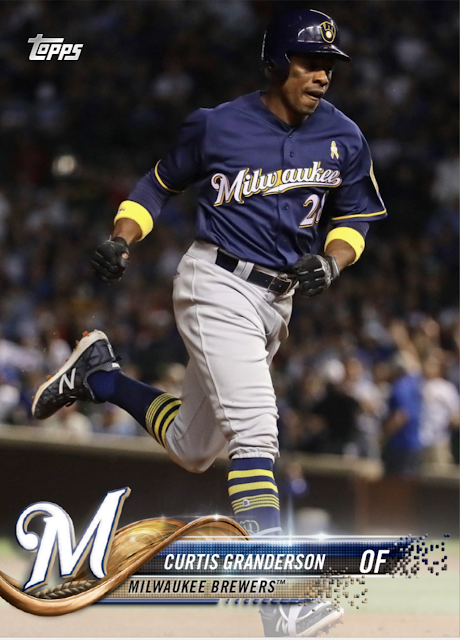 ...to an NL competitor. This time it was the Milwaukee Brewers, squeezing into the postseason at the last moment and winning some matches when no one expected to. And for 19 games, they had Curtis Granderson. Grandy continued his late-era middle of the road work, hitting .220 with 3 RBIs and 2 home runs. Again, Granderson's postseason output was limited, but he did have a crucial RBI double in the NLCS against the Dodgers.
The rest is history- he has an easy year with Miami, continues to be well liked by most of the league, retires after the season and has another 5 years before sportswriters fight to the death over whether or not he's worthy of more than 5% of the HOF vote.
Still, if Topps was better about catching waiver deals late in the season, we would have had cards like these years before, rather than waiting for me to throw them through a card generator that somehow hasn't updated for 2019 or 2020 so I can do some from those sets.
Posted by Jordan at 7:44 PM

Labels: 2017, 2018, Brewers, Curtis Granderson, Custom Cards, Dodgers, Topps Cards That Should Have Been