Topps Cards That Should Have Been: The Justin Morneau Chronicles 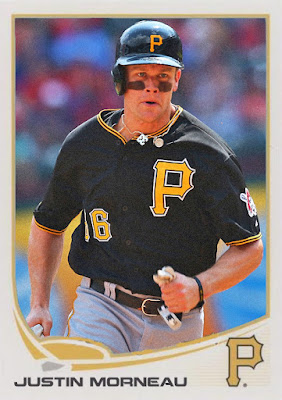 Even for a guy who beat out Derek Jeter for an MVP, Justin Morneau still got the shaft from Topps once or twice towards the end of his career, hence this project.

The first one wasn't Topps' fault. Morneau was dealt by his beloved Twins to the Pirates on a waiver deal, in order to help the Pirates' playoff efforts. This deal happened on August 31st 2013, which means it was well past Topps' cutoff for Update, so...he wasn't included. And by the time Morneau's 2014 flagship card was released, he was already in his new uniform in Colorado.

Which leaves his Pirates tenure a mystery to most collectors. Truthfully, it was a very low-key 25 game stint with 20 hits, 4 RBIs and no home runs, despite a .259 average. Morneau was also the Bucs' starting first baseman in the playoffs, and had 7 hits, including 1 double, over two series'. Yes, his RBI totals were nonexistent, but he'd still retained his contact abilities away from Minneapolis, which was a good sign.

After this, Morneau signs with the Rockies for two years, has a great season in 2014 and a weaker one in 2015.

Morneau remained unsigned over the course of the 2015 offseason, and it wouldn't be until June that someone would sign him... 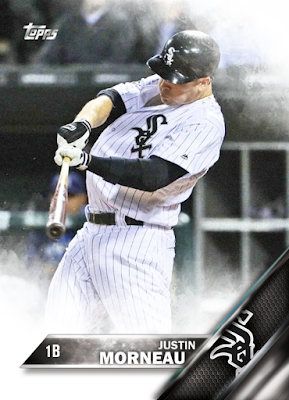 Yes, the former division rival Chicago White Sox, despite a solid choice at 1st base in Jose Abreu, would be without a good DH choice for 2016 thanks to the unceremonious walk-out of Adam LaRoche, so they bit on Morneau, and he was a decent DH option for 58 games in 2016. Morneau batted .261 with 25 RBIs and 6 home runs. Topps also declined to depict this, because...well, they don't like fun. This could have easily popped up in Update.

After this time in Chicago, Morneau retired following the 2016 season, and returned to Minneapolis as a legend.

I don't know if Morneau has a HOF case, or if he's worthy of the story of baseball outside for a few Twins seasons in the late 2000s. But it's worth it to tell his story because even in two lesser known stints in unfamiliar teams he still hits for average and leaves with his head held high. That is something you don't always see these days.