Topps Cards That Should Have Been: 2017 Bartolo Colon 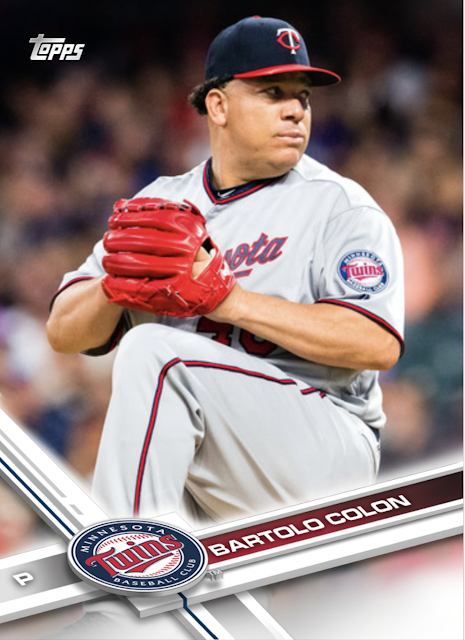 I am 99% sure that this is the final Bartolo Colon-related entry in this series.

Bartolo Colon, who by the way is still listed as an active player, began to pedal downhill after his fantastic 2016 season, getting an ASG nod and 15 wins at 43. But now, at 44, he was finally...FINALLY...pitching like a 44 year old. And after a torrid start with the Braves [2-8, 8.14 ERA], Atlanta gave up him in favor of...like, young pitchers.

But, not even three days later, the Minnesota Twins came calling. Not a last place Twins team, a playoff-bound Twins team, that...still needed starting pitching. So on July 7th, they signed Colon for the rest of the year, had him up for 15 games, and he improved on his disappointing start with a 5.18 ERA, 46 strikeouts and a 5-6 record. It was a return to legitimacy, in a sense, for the 44-year old. While it didn't give him a spot on their postseason roster [as their postseason stint was short-lived that year], he did get to experience some better games, and that eerie-as-hell eclipse game [documented in a famed ToppsNow card].

Then, he gets cut by the Rangers prior to 2018 opening day...then RE-SIGNED by the Rangers cause, hell, they need starters, and he gets a full season of work to finish his career. Not too bad.

As for why he didn't get the official 2017 Topps card in Minneapolis...2017 was the season where Topps' Update checklist cutoff began to get earlier and earlier. Pretty much every season since then with the exception of 2018, Topps has been forced to use a ridiculously early cutoff for Update, not only missing a lot of the big Update-able moments of the season, but forcing a lot of them into the following year's flagship, and screwing the next year's Update set over. 2017's probably suffered the most, as this deal happened in EARLY JULY and yet it didn't get an Update card. Which blows.

Now that the Topps template-maker is working for me, I could, in theory, prioritize the 2017 trade deadline deals if I wanted to, cause that entire trading season is one that was completely missed by Topps [with some exceptions, like Yu Darvish's short-printed Dodgers card].

Regardless, I hope you all have had, and are having, a happy Thanksgiving, and are safe and healthy. Maybe next year, like Bartolo Colon, you'll get a chance to do what you love again.

Labels: 2017, Bartolo Colon, Custom Cards, Topps Cards That Should Have Been, Twins