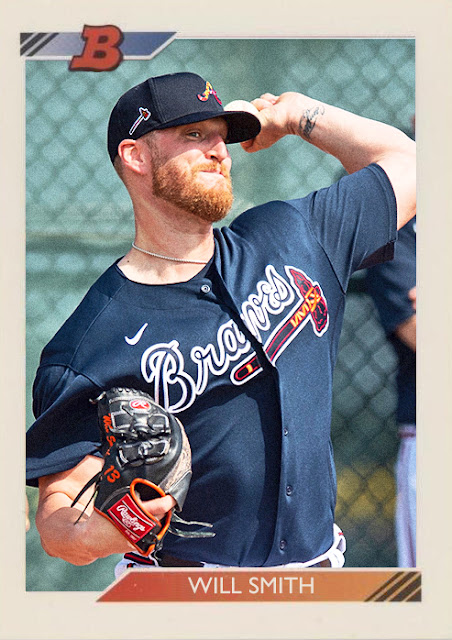 I feel as though I am dooming Will Smith by presenting him during the first week of Spring Training customs. Because, usually, that week is for people who look to have great seasons, or just got traded/signed to a new team, and for whatever reason I always make one...awful prediction in every year's first week, just in player selection.

Like, 2013 my first custom was Michael Bourn on the Indians. Because THAT's certainly where the Indians' rise to glory came from. I've also done customs of Jason Hammel in 2017, Barry Zito in 2015, Mark Trumbo in 2014 and...countless others. I've been wrong before.

And there are a lot of signs that Will Smith in Atlanta could be a disaster. First of all, recent history- the Braves bullpen has yet to hold onto a substantial closer since Craig Kimbrel left. Lots of over-the-hill guys, or too-inexperienced guys. Then, when the Braves went to trade for people who CAN close games, like Shane Greene and Mark Melancon, both floundered in the ninth for them. The Braves can take great relievers and make them look pathetic. I don't know how, but they do this.

Then, there's the variable that Will Smith isn't the only Will Smith in town anymore. There's another guy in LA, a catcher for the Dodgers, with the exact same name, who seems to be on the up-and-up, and may have a chance to be the Dodgers' starting catcher this year. Meanwhile, this Will Smith is 30, is coming off his first successful full year as a closing pitcher, and has gained and lost momentum like any other reliever over his first decade in the bigs. The other Will Smith may gain traction and usurp this Will Smith for the title of Best Will Smith in the Bigs.

Also, and this just occurred to me, there's also a famous actor named Will Smith! SHOCK! HORROR!

So, Will Smith, despite being one of the first big signings of the offseason, and one of the biggest breakouts of 2019, has a lot to prove in Atlanta this year, and hopefully he delivers. He's definitely capable of a lot, and hopefully I'm not correct in my concerns.

Coming Tonight: The Braves wish they had this guy still. But he's chilling in Fort Meyers right now with the best slugging lineup in baseball.
Posted by Jordan at 10:11 AM