The Stars Are Out 2019: Everything Else 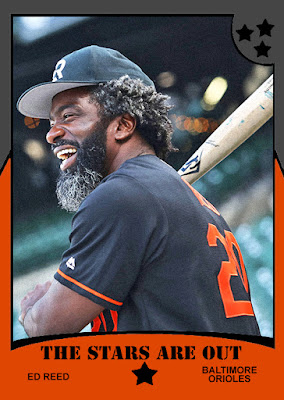 Look, let's be very honest, haven't been very good at the blog over the last few months. Or, years maybe. Lots of posts I need to write concerning anxiety and trading, and just my addiction to cards in general, but...I owe y'all some content.

...which means all this stale 2019 content NEEDS to go. By any means necessary.

So we're knocking out the rest of the Stars Are Out project. These desperately need a redesign, as it's the new decade and I need to stretch some graphic design skills and find something knew for this to be without seeming amateur. 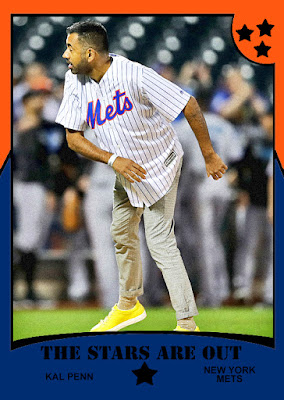 Kal Penn left a job at a high-class FOX procedural in order to work for the Obama administration, and is one of the smartest media personalities out there, but odds are you know him best as Harold's bud Kumar. Kal's a Mets fan, because of course he is, and chucked one out in September. 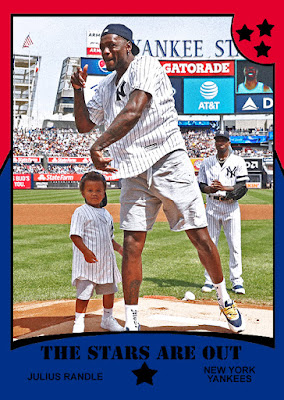 Yankee Stadium doesn't get many kitschy first pitches. Lot of BIG STRONG SPORTS STARS. Julius Randle, right after landing in Manhattan, got to throw one out for the Yanks with his kids, and then proceeded to be one of the few bright spots in a predictably dire Knicks lineup. 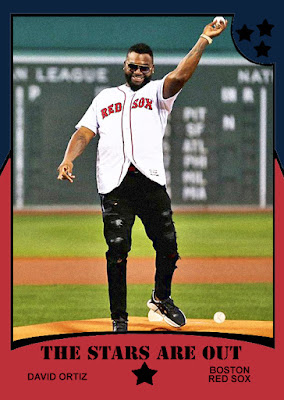 Yep. Had to do a Big Papi.
Everything the guy's gone through since retiring, coming back from some violence last year, and he still returns to Fenway deified. Gotta love it. Sad he could throw this out in the playoffs, but the last game of the year had to do. 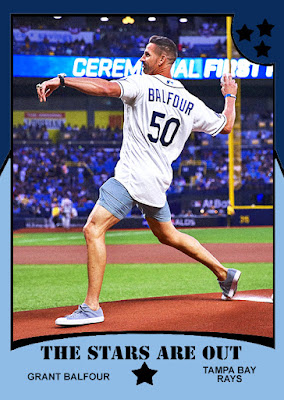 Into the playoffs we go. Gotta be odd if you're the Rays, and you make the playoffs, and you wanna call upon the greats to throw out first pitches but you've only been around for 21 years. So you get people like Grant Balfour, who, while a pretty important Rays figure for a previous round of playoff appearances, is still an obscure get compared to some other people in this post. Still, Rays fans love Balfour, and what's not to love- a scrappy reliever from Oz who gets 'em looking. Liam Hendriks wishes. 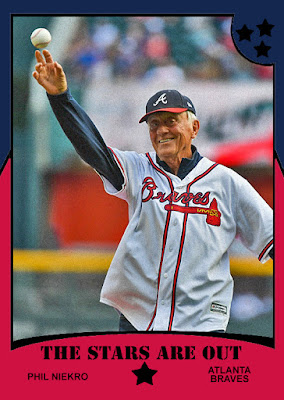 The Braves were only in the playoffs for a week, but at least they had time to get PHIL NIEKRO to throw one out. Genuine Atlanta legend, and undoubtedly the greatest knuckleball pitcher of all time. Looks happy here, too. 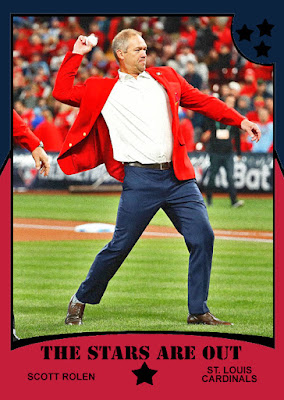 Cardinals got a few contemporary heroes out, including Jason Isringhausen AND Scott Rolen, who should be getting into Cooperstown one of these years. Seems to fit right in at Busch, like no time has passed. 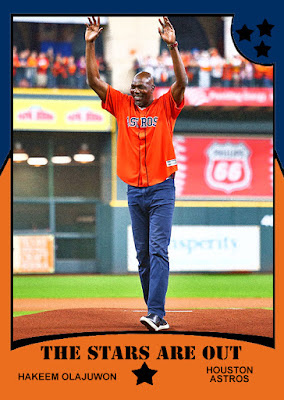 Yep, a non-cheating Astros sports star. Houston Rockets legend Hakeem Olajuwon, who relishes the applause at Minute Maid, and is still as freakishly tall as ever. Glad they got him out there, wished it was for a more lawful team. 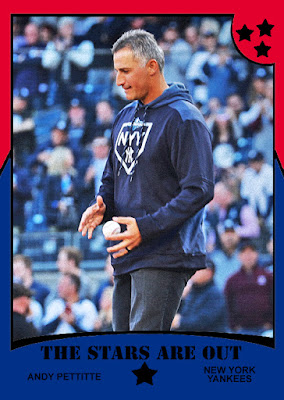 We end on a Yankee, because it'd be weird if I didn't with this blog. Pettitte is still a loyal Yankee hero despite the diminishing returns on his Cooperstown ballots. Still did a lot of good stuff for us, deserves respect, of course he got some nice audience response from this first pitch. Wish said playoff series went a little better for us, though.