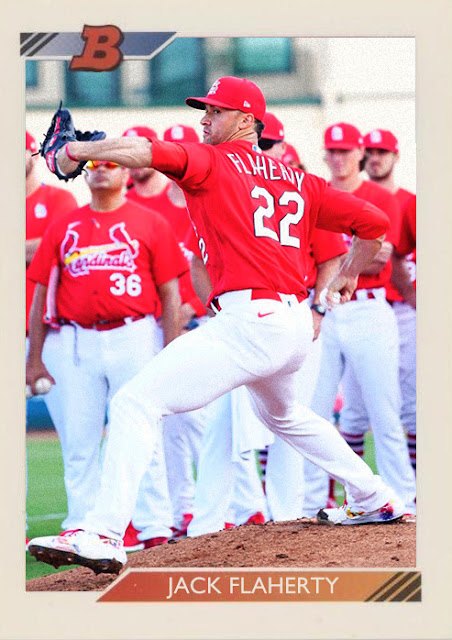 Can everybody just...calm down about Jack Flaherty?

In years' past, I've always been seen as a cynic towards anything related to the Cardinals. What always happens is that the majority of the team is just playing alright, and a few fringe players carry this team into the playoffs, and suddenly everyone acts like they were good from the beginning.

...okay I think I just described the 2019 Yankees as well, but...let me make this clearer.

The 2011 Cardinals weren't the best team in the NL, that'd be the 2011 Phillies, who deserved better. Last year's Cardinals were only better than the Braves in that their bullpen didn't have a gaping hole in it. The Cardinals are a very lucky team.

Jack Flaherty...is a very good pitcher. He had a very good season in 2019, with an 11-8 record, 231 strikeouts, and the lowest WHIP in the leagues. Was it the fourth best pitching performance in the NL last year? I don't think I would have voted for him over Stephen Strasburg or Mike Soroka, who all arguably had deadlier seasons.

Perhaps it was Flaherty's postseason numbers, including 22 strikeouts across 2 playoff series', that garnered attention. Maybe it was the lack of a clear ace in St. Louis in that point. But as people are suddenly proclaiming Flaherty the pitching god of St. Louis, handing him the Opening Day start a month and a half in advance and calling him one of the best pitchers in baseball...I think we ought to calm down a bit.

You can't call somebody the best ANYTHING in baseball after just one season of peak material. And yes, Flaherty's 2018 was fine, but it came with an 8-9 record, due to a worse Cardinals team. Saying Flaherty is gonna tear down NL Central offenses this year after just a year of his best...isn't fair to either the Cardinals or him. We don't know if his 2019 season is the norm yet, just as we don't know if Pete Alonso can hit 50+ home runs on the norm, or if Will Smith can notch 37 saves on the norm. We can predict all we want, but we can't say anything for certain until we have a larger field of evidence.

If Flaherty has another great year in 2020, which he very well might, and gets a Cy Young and some pitching titles, then I will be fine with people calling him one of the best pitchers in baseball. But that sort of moniker has doomed Blake Snell, it's doomed Rick Porcello, and, yes, it's doomed Tim Lincecum. Sometimes certainty of a perceived future can be as dooming to someone as the future itself.

Coming Tonight: Another guy coming off a huge 2019 season, though this guy's had a bit more consistency as a league threat. Hope he'll be alright batting after Mike Trout.
Posted by Jordan at 11:27 AM