My Head is an Anibal 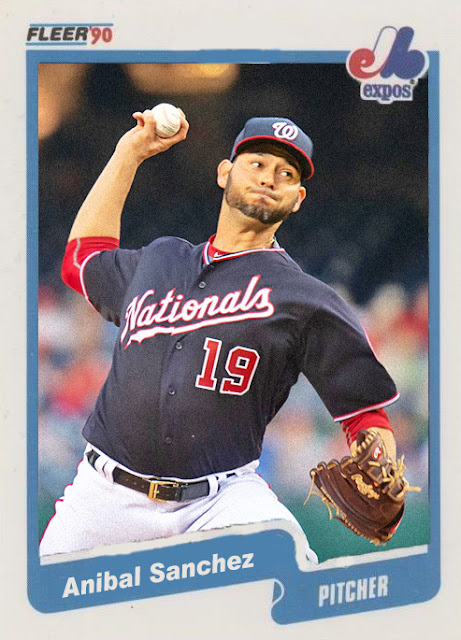 Say what you will about the Nationals' overall playoff chances, but...if you're going into any kind of division race, or any kind of race, with a rotation of Stephen Strasburg, Max Scherzer, Patrick Corbin and Anibal Sanchez...and they're ALL ON? Oh man. You're gonna have to hope the lineup matches up.

Anibal Sanchez is gonna go down as one of the unsung heroes of starting pitching in the 2010s. He was on some competitive teams for most of the decade, especially those early decade Tigers teams, where he teamed with Verlander, Scherzer and Porcello to mow down enemy offenses. Ironically, the only one of those guys not currently gunning for a playoff spot is Rick Porcello- his Sox are a bit outgunned.

Sanchez has been sharp the last two years in a smaller role in rotations, and has improved statistically on his subtler 2018 in Atlanta by starting more games, notching more wins and...being that he's 10 strikeouts away from his 2018 mark, he may pass that as well. Thank god the Nats have him for 2020 as well, because he's a strong little asset, and even if he's not an OMG guy like the first three, he's strong enough to shut up opposing teams.

The pitching is not my concern with Washington though, especially as the bullpen mellows out. No, I'm just concerned with the meh-ness of the lineup. Take away Rendon, Soto, Robles and Turner, and what do you have? A bunch of veterans roaming around, trying to make it look like they still have it when they don't. Howie Kendrick's great, but he's blocked by Brian Dozier. Asdrubal Cabrera's great, but he's struggling for playing time as well. Kurt Suzuki is a fine catcher, but he's the backup. For a team that's pushing toward a wild card spot, this is a very okay assortment of players they're banking on.

I could be wrong, and they could turn into a threat, but...I'm not convinced yet. Around this point, I'm convinced the Nats can break their streak and win a playoff series. Here, I don't have that confidence.

...which is perhaps what they need.

Coming Tomorrow- I honestly was not expecting the Reds to get rid of this guy, but...Cleveland needed outfield help, so whatever.
Posted by Jordan at 9:26 PM