We Need to Talk About JBJ 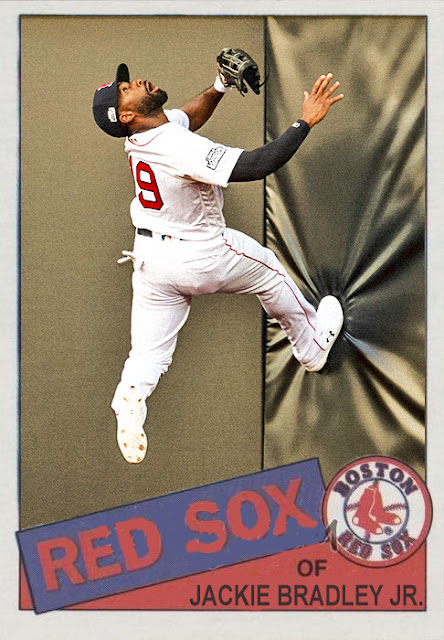 Yeah, I think it's time.

Look, the Boston Red Sox have had a lot of problems this year, and I'm not gonna lie and say that JBJ was the biggest one of them, because...I mean, he's still one of the leading players on the team, and he's not one of the starting pitchers who crapped out midway through. But...

Jackie Bradley Jr. is a fine player, and is one of the more impressive defenders in baseball. But we have to face the fact that he cannot hit for shit.

Bradley is essentially the AL's version of Billy Hamilton. You are keeping him around for one thing he can do really, really well, and you are glossing over the fact that he can't hit well at all. Granted, Hamilton is a little worse at the plate than Bradley, but Bradley will spend the first few months batting below the Mendoza line, then eventually spring up so he's hitting around the .220s or the .230s by the end of the year, and striking out 100 times either way.

Looking at his WAR splits, he's averaged a -6 runsBatting figure for the last 3 years. In 2014, his rookie year, he had a -27 in this category. He's averaged 17 home runs the last few years, and 60 RBIs. These numbers are not great for a perennial, trusted starter.

And look, even his defensive numbers are slipping. This year he's got a 2 in RunsFielding, which is concerning considering he averaged 12 in his first 4 full seasons. This averages out to a 2.1 WAR in the past few years, which means a lot of better numbers had to be crunched to make him a pivotal performer, because I'm seeing a LOT of okayness in these stats.

And I don't wanna make this a smear campaign against Bradley, because I do think he's a great fielder, and that photo was a fantastic one to use for a custom, but...it boils down to the fact that the Red Sox don't have a very low tolerance for guys who consistently fail to deliver for them. I look at Bradley, Rick Porcello, Christian Vazquez (who admittedly is better this year), Brian Johnson and Steven Wright, and these guys have been around for years and have all skirted around okayness every damn year.

Then I look at Dustin Pedroia, who may not ever play another game for the Sox. They've made a career choice out of being a replacement for Pedroia- just this season, Eduardo Nunez, Michael Chavis, Brock Holt, Marco Hernandez and Chris Owings have done it. With Chavis looking like a starting option in 2020, I dunno if there'll be any room for Pedroia. Will they want to face this? Will they want to go through with it?

The Boston Red Sox are a fine organization who are able to win rings, but their biggest problem is creating perennial success after a title. look at 2005, 2008, 2014 and this year. They have to tear shit down before they build it up again, instead of what someone like Houston or LA is doing and riding multiple playoff journeys on the same squad archetype.

The Sox have a lot to work on, and a lot to consider. And 2020 might be an interesting year for them.

Coming Tonight: So his team didn't move mountains in 2019. Fine. At least he finally made a name for himself as a starter, which he couldn't really do in his rookie year.
Posted by Jordan at 11:02 AM