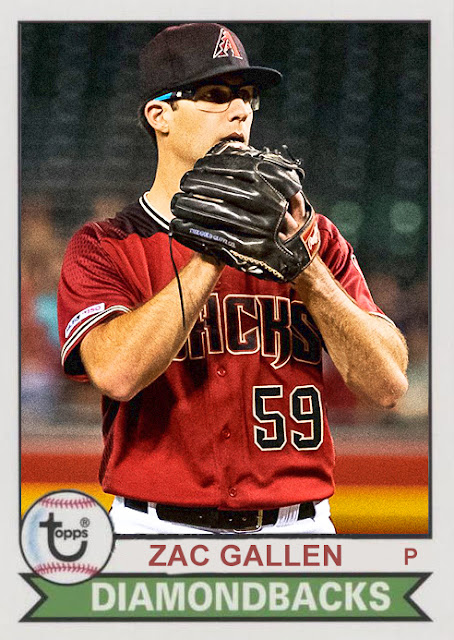 Here's a fun fact- usually by this point in the year, I'll have done customs of some of the people traded at the deadline, someone like Zack Greinke, Nicholas Castellanos or Eric Sogard, but...because of the urgency of many of the people that have gotten customs in the last month or so, I haven't gotten around to any. Also, for the reason of wanting to farm good photos until I absolutely have to.

So, my first traded custom of the year ends up being...Zac Gallen.

It may seem like a weird pick, but...Gallen may be having the most under the radar, accomplished rookie year of them all this year. In seven starts, Gallen went from an unknown to the best starter in Miami to a trade target. Who the hell can do that over the course of seven starts? You can also chalk that up to the Marlins not having security over any of their assets, as they also managed to trade Nick Anderson, another rookie, to Tampa.

So Gallen does fantastic in 7 starts with Miami, gets traded to the Diamondbacks, has seven more starts where he basically has a slight edge over the first seven (2.72 ERA in Miami, 2.62 in Arizona, and other fun comparisons). And this team doesn't make it to the playoffs either. But he's still one of the best pitchers on it, and not like in a Marlins kind of way. You already have Luke Weaver, Robbie Ray, Mike Leake and Merrill Kelly contracted for a few years (Ray will be done after 2020), and the fact that Gallen just entered into this and is pitching like this? That D-Backs rotation may still be pretty ironclad after all.

[This is all if the D-Backs don't end up trading Ray or Leake to let someone like Alex Young or Taylor Clarke start games next year, but...I can't predict shit, so I'm gonna assume they won't for now]

The bottom line is that Gallen has had to endure more in the last year than most rookies, has accelerated with grace and skill, and this is only his first year in the bigs. This is his audition to other teams that he can be a huge asset, and may be such for the D-Backs next year. Hell, he's still one of the few things keeping the team sort-of/kind-of in the wild card picture, despite the unlikelihood of them getting it.

So even if Arizona didn't turn into a playoff team after trading for Mike Leake...at least they got Zac Gallen and Leake to cement an awesome looking 2020 rotation.

Coming Tomorrow- Another deadline trade. This one's looking even better for the guys who picked him up.
Posted by Jordan at 8:30 PM