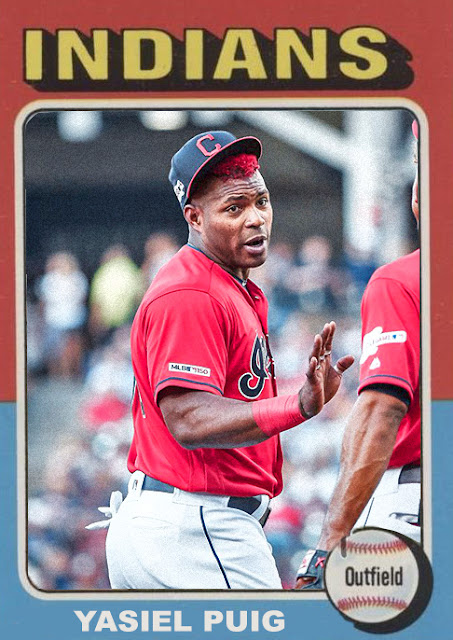 I am enjoying this Yasiel Puig redemption arc that is 2019.

True, Puig's numbers aren't as initially potent as his 2013 ones, but he's also shed a lot of the controversy of his Dodgers years, like dodging suspensions, trips to the minors, stints on the IL and everything. His heights were very high, like some playoff production and hitting a bunch of home runs in 2017. Despite that, his batting average has been around the .250s and .260s since 2015.

So now, Puig is no longer the big, powerful draw he was in LA, but not just an intriguing, helpful lineup piece. So of course, when the Indians had the opportunity to plug someone like that into their ailing outfield, they took it.

Puig in Cleveland has gone relatively well so far, though he's relied more on contact than power, similar to his Cincinnati stint. He's averaged a hit per game, with 16 RBIs in those 39 games, and though he's hit .267 again so far, he's definitely a worthy upgrade from Leonys Martin and Greg Allen. Plus, with Puig and Mercado surging, and backups like Jordan Luplow and Jake Bauers doing alright, the absence of Michael Brantley isn't exactly hurting this team. The Tribe are expected to call up Bradley Zimmer next, which should help for the stretch run.

The Indians are still within reach of the Wild Card spot, but they've fallen behind a bit, and are now a game and a half behind Tampa for the last spot. Yes, we do have two weeks for things to straighten out, and this team does have an impressive-as-hell pitching rotation (even without Kluber), but going into the homestretch third in the race of two isn't the best strategy. Now, the Indians do have an easy run over the next week, with games against the Tigers and Phillies coming up, so that could be a little kinder to them than, say, Tampa's upcoming series' with LA and Boston.

I like this Indians team, and I think they've got a shot to squeeze into the picture. I'd just watch out for the A's.

Coming Tonight: A member of the rocky-but-resilient Cubs rotation.
Posted by Jordan at 8:49 AM