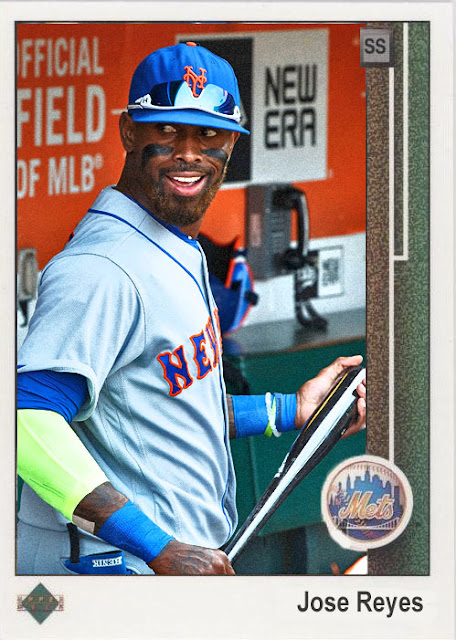 First of all, I'm not even a Mets fan and I'm just so...so damn happy to see this guy back in a Mets uniform. Everything else is simply unnatural.

Now...as for the 2016 Mets...I'll say that they're nowhere near the amount of fun that they were in 2015, and they're no longer the fun little squeeze-through guys because they're not as accomplished as they were last year. I had an argument with my Mets-fan screenwriting professor about whether or not the Mets can be considered fun this season.

This year they have a lot more hanging gears. They're less of a well-oiled machine. The pitching staff is a bit messy, with some rookies and other arms just thrown into places where they don't even fit. Jay Bruce hasn't done too much with his new spotlight. A great deal of the major players from last year, like Lucas Duda, Matt Harvey, David Wright and Michael Conforto, are either injured or refusing to hit.

But...somehow the replacements, like Asdrubal Cabrera, James Loney, Kelly Johnson and, yes, especially Jose Reyes, have been commanding the lineup in addition to the usual favorites like Cespedes, Grandy and the one-two punch of DeGrom and Syndergaard. This is a flawed team, but they're winning games in the clutch, and they're making a case to sneak into the playoffs.

Right now the tight WC race involves the Mets, Giants and Cardinals. Three teams that have been here many, many times before, in the recent history. As it is an even year, look for the Giants to take one spot. It might be Mets-Cardinals for the last spot, and you know how badly I'd like someone else besides the Cardinals to make the playoffs this year (it is about goddamned time).

So yeah...Jose Reyes has helped the Mets fly into the playoffs once or twice before...and I'd love to see him do it one more time.

Coming Tomorrow- He's got a name like a Highlander villain, but he's somehow keeping the Royals in the conversation.
Posted by Jordan at 11:03 PM