Crushed in the AL East 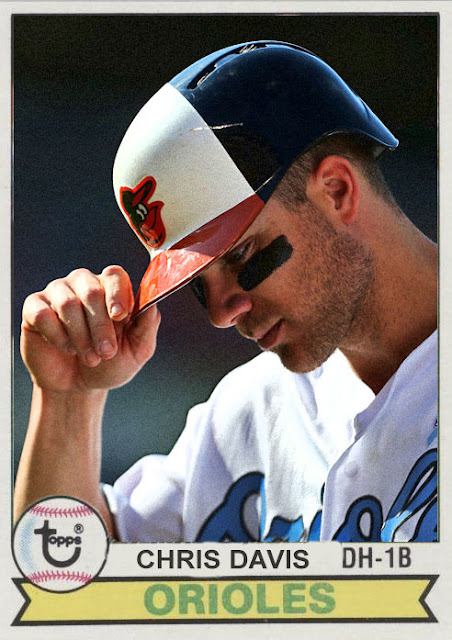 (I kid you not, the original title for this post was 'Everybody in the AL East, Put Your Muthaf--kin Hands Up and Follow Me'. There are many problems with me titling a post for my baseball card blog about baseball cards with a reference to an Eminem song. Most of you are over 30. Also...I'm not frigging titling a post about the Orioles with an 8 Mile reference. Not doing it. I'm not taking the risk.)

Right now, the race for the AL East title is...essentially a foot race. Instead of being between two teams, like essentially everyone else, the AL East has FOUR TEAMS that are close enough to each other that ANY OF THEM could win the division and get a playoff season.

And when I say four teams, I mean everybody but the Rays has a shot for the title. Sorry, Rays. Next decade, maybe?

Right now we have two teams that have been going back and forth since April, the Orioles and the Red Sox. Both have had their moments in first, both have their strengths and weaknesses, and both are actually a lot of fun- I'd be fine with either one taking the title, with emphasis on the O's.

Then, there's the Blue Jays, who have just showed up halfway through the season, regardless of whether or not they deserve it, and have just...decided that they're gonna be good. Right now they're in Wild Card position, and while they're beginning to lose steam, it'll take a bunch of series losses to bring them far enough out of it that they won't be a problem. And the Yankees took a few wins from them recently, but someone, like hopefully Baltimore, needs to finish the job. This team is okay, but definitely not worthy of a playoff spot this year.

AND THEN...There are the New York Yankees. The team that everyone, included this very blogger, counted out. And thanks to the kids, thanks to the Baby Bombers...they are within reach of the rest of the division for the first time since April-ish. They have only a few more wins and they're right there with the O's and Jays. I have no idea how this has happened, but somehow, they're in the race, and they've got a HUGE shot to squeeze in.

Plus, the way the Wild Card is working, at least one spot will be reserved for an AL East contender. The Tigers are still high enough up there to be considered a serious threat, but the Astros and M's are basically done, barring a huge comeback. So, of these four contenders, I'd guess that at least two of them are looking at playoff spots. If one of the others knocks out the Tigers, then two teams will be fighting for that WC spot. Bottom line- there will be some serious AL East representation in the playoffs, because this race is so tough.

Still, it's just fun to watch, and it'll be interesting to see who slides in and who's left out.

Coming Tonight- It's been five long years since he last saddled up to play shortstop for the Mets. Now...he's back, and he's on fire.
Posted by Jordan at 10:41 AM