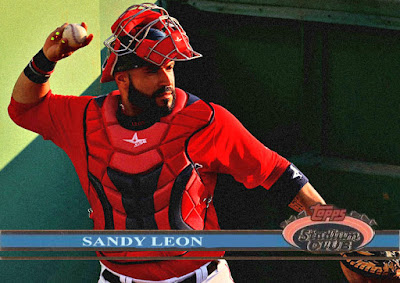 Right, after that college-related break in posting, back to the matter at hand- the season ends in two weeks and we're inching towards the playoffs. And it's looking like this is the Red Sox' year, which means that the right team's taking this one away.

I've been saying this for a while, but the Sox have accumulated the best team, and the best overall lineup, of all of the AL East competitors. The O's were great for a while, but they're JUUUUST succumbing to their injuries- they may sneak in via the Wild Card but 1st place doesn't seem likely at the moment. The Jays and Yanks are basically out of it.

The Sox...I don't know how they did it, but they have people like Sandy Leon, Rick Porcello and Koji Uehara, people that basically everyone counted out, playing like it's the end of goddamned days (and for Uehara it pretty much is). Sandy Leon took a job that pretty much belonged to Christian Vazquez this season, made it his own and became one of the most underrated and powerful catchers in baseball. Combine his stuff with the already-unstoppable threats like Mookie Betts, Jackie Bradley, Xander Bogaerts, David Ortiz, Dustin Pedroia, Hanley Ramirez, and HOLY SHIT THAT'S MORE THAN HALF THE LINEUP. HOLY CRAP THIS COULD BE THEIR YEAR.

I know that everyone's crazy about IT COULD BE THE CUBS or IT COULD BE THE RANGERS, but the Red Sox certainly could zoom back to the top and win a World Series, and I'd be perfectly fine with it happening. This isn't a team I hate anymore, like the '07 squad. This is a well-built, tough as hell team that may in fact clobber everybody in the game.

Whatever happens, it'll be fun as hell to watch.

Coming Tomorrow- The Marlins aren't going to make the playoffs, so here's one last tribute to their mega-ultra-power hitter.
Posted by Jordan at 7:06 PM