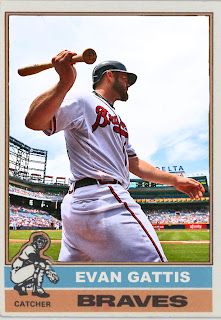 I absolutely love this card, and it's probably one of the best I've done all year. It's that good.

Gattis is a strange case. And yeah, I mean that honestly.

Evan Gattis has been playing games this year behind the backstop for Atlanta. And he's been really, really good at it. He's a great hitter, great backstop, all around great addition to the squad. Justin Upton's not hitting, well who cares, we have Gattis. That's the mindset.

Now granted, McCann spent the last few seasons on and off the DL. And also, he's beginning to contract Aging Catcher's Disease, (or Mike Napoli's Disease), where his days might be numbered solely because of his time spent behind the plate. But it must feel like an insult to come back from an injury only for the fans to NOT WANT YOU, because of this rookie that's doing your job better than you have. That must hurt.

I will admit that as of right now, I'm liking Gattis more than McCann. Gattis has a certain appeal to him, like he's more of a wild card than McCann, and he has more long term potential than McCann. Besides, there are a dozen other teams who need a really good catcher. We may see McCann somewhere like Seattle or even the Bronx next year.

But to conclude, I'm liking Gattis, and I hope he sticks around.

Coming Tomorrow- He had a nice season last year with the Nationals. Now, he's back where he started, panicked, depraved, and actually hitting.
Posted by Jordan at 10:46 PM