Why I won't miss Russell Martin 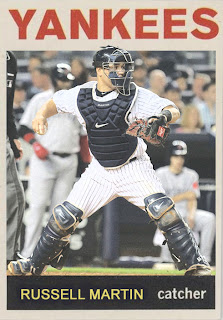 Here we go, the top 10 reasons I won't miss Russell Martin. I know the list idea is tired, but so am I.

#10- He's Canadian.
#9- I didn't miss AJ Burnett when he eloped to Pittsburgh.
#8- His consistency led to Jesus Montero being traded. Yes, I'm still bitter.
#7- He only hit home runs whenever I was watching a game.
#6- He's Canadian.
#5-In two years in the Bronx he erased everything that made him great for five years with LA.
#4- Because somebody with his same first name became the most hated man on TV a few years ago.
#3- Now all we've got is Cervelli, a professional backup, and Austin Romine, who's young.
#2- Did I mention he's Canadian?
And the number one reason why I won't miss Russell Martin is...
For someone who was replacing one of the greatest Yankee catchers in recent history, he could have done a much better job.

PLAY ME OFF, PAUL!

UPDATE: I apologize to all Canadians. Everywhere. You guys are awesome. I just know an easy target when I see one. Still...please don't take any of that to offense.
Posted by Jordan at 9:18 PM