The Playoff Clinches so far 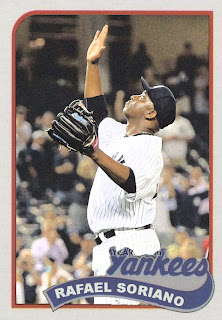 So the playoff races are coming down to the wire in most divisions, while three have already been conquered. And as Rafael Soriano above proves, the Yankees clinched the AL East for the umpteenth time. And that's a good thing. But I'll go over, division by division, who I wanna see in the playoffs, or I'll dish on who's already there.

AL East: Yankees. They had an up and down season, but at the end of the day my team was ahead of Boston. I'll be seeing them in the World Series, hopefully.

AL Central: Tigers. I'm slightly worried about these guys. True, they have one amazing pitcher, and third stringers like Doug Fister, Brad Penny and Phil Coke. But they have hitting. People like Victor Martinez, Miguel Cabrera, Austin Jackson and Alex Avila all can hit. They might hit their way into the World Series for all we know.

AL West: Not yet clinched. It's probably going to end up being the Rangers. The Rangers do not seem like a very big deal this year. True, the hitting's still there, and they have most of the guys from last year, but not much has changed. I don't think they'll get past the first ring of the playoffs.

AL Wild Card: Not yet clinched. Hoping it's Tampa. I really don't wanna go against the Red Sox in the playoffs. Sure, they had a downfall, but they're still the Red Sox. Tampa isn't much better, but we can hopefully beat Tampa.

NL Central: Not yet clinched. I would be happy if the Brewers won it, because of the season they're having. Also, Zack Grienke has never been to the postseason, and I feel it's about time.

NL West: Not yet clinched. The Giants are probably going to take it. I don't think they'll get as far as they did last year. They have offense, but it's like a Celebrity Apprentice offense. And the pitching's great, but can pitching speed a team ahead.

NL Wild Card: Not yet clinched. Might be Arizona. Crap.
Posted by Jordan at 6:58 AM

Labels: Playoffs? They can't even play a game