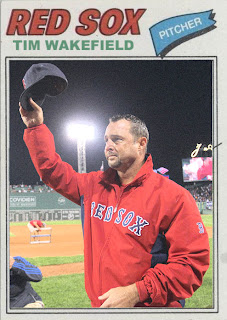 Knuckleballers, like Rodney Dangerfield, never get any respect. Sure, Phil Niekro and Hoyt Wilhelm get all the attention, for being a long lasting knuckler playing into old age. And even names like Charlie Hough come up, and while he's no Hall of Famer, he was one of Florida's first big stars back in the 90's. But nowadays, when knucklers are mentioned, Tim Wakefield is obviously the first man that comes to mind. Because he's been pitching consistently since 1993, and he's been doing things well.

Now granted, he's been on the Red Sox since 1994, and he's been through a lot. From the crappy days of the mid-90's, to the even crappier days of the late-90's, to both World Series wins. He's 44, he's still pitching, and his name does not rhyme with Shamie Shoyer. Also, he just achieved his 200th career win. While that comes nowhere near 300, or any of the great pitchers, it's all well and good for Boston fans. Because even if Wakefield comes nowhere near Cooperstown, they'll still remember him for his 2 decades with the team.

Coming Tomorrow- Once again, I have to make some more. Any requests?
Posted by Jordan at 8:26 AM