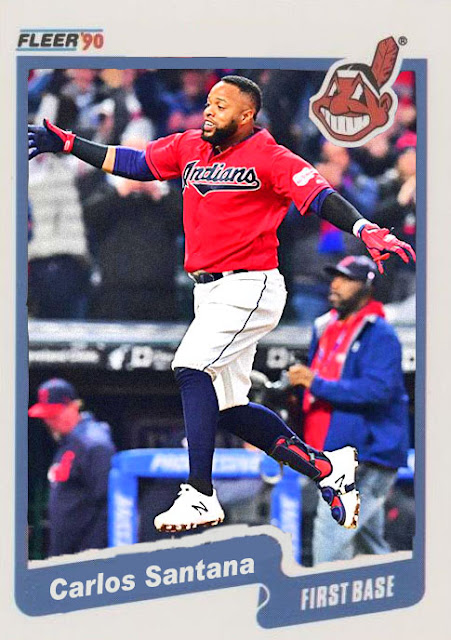 (...yeah, might as well. A new Music Pun streak begins with this low-hanging fruit)

I guess that both World Series teams from 2016 had about the same shelf life. As the Cubs are wading back to 3rd-4th place, the Indians have regressed back to second, letting the Minnesota Twins ascend to power. And like the Cubs, the Indians have made the mistake of not attracting major contracts while simultaneously gradually losing their stars to teams who are attracting major contracts.

The difference, though, is that while they are no longer a first-place team, the tribe seems to still have upward momentum thanks to its farm system, which hasn't been completely compromised in the come-up, as evidenced by second-years Greg Allen and Shane Bieber getting substantial playing time. Plus, although they're not chasing big contracts, they've still netted some intriguing pieces, like Jake Bauers and his power hitting, Carlos Gonzalez' bench numbers, and their old friend Carlos Santana, who has been absolutely ruling this team in Francisco Lindor's absence.

Good news is that Lindor is back, and the DP combo of him and Ramirez will begin to heat up with both of them in the lineup (yeah, seeing Jose Ramirez trying to act like he and Eric Stamets were compatible was kinda odd). Plus, Leonys Martin has become a pretty solid replacement for Michael Brantley, and it's good to see that his 2018 numbers weren't a fluke. As for the rotation...look, even with Kluber and Carrasco giving up a few more runs than usual, they're still ferocious as hell. Nobody wants to go up against those guys, especially Trevor Bauer.

So really, the only real issues involve rebuilding the lineup a bit after some inexperience early in the season, and figuring out the Twins' weakness. This isn't a bad team, but they're circling 'okay' about now, and they need to figure out how to lock down first again.

Coming Tomorrow- I checked just now to see who's ahead of the NL Central and legitimately did a double take. In a good way, though. I'll explain tomorrow, but the custom will be of the first baseman.
Posted by Jordan at 7:39 PM