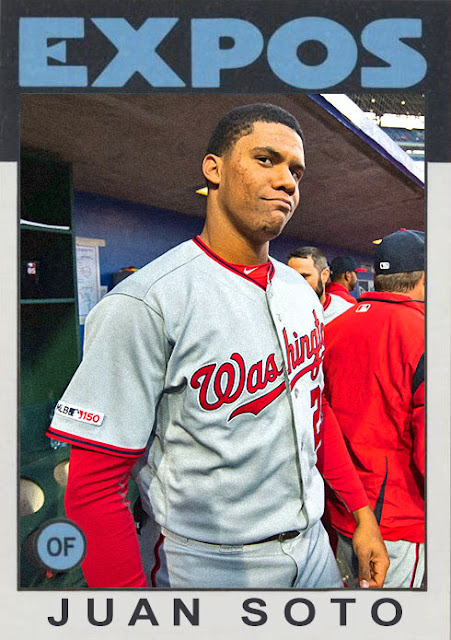 That, right there, is the look of someone who's been trusted to help carry a team in his sophomore season.

Juan Soto's...for lack of a better term, sophomore slump, isn't really his fault. There's a gaping hole in the Nationals' outfield in the shape of Bryce Harper, and he's the closest thing they have to a star big enough to fill it. And Juan Soto is a fine ballplayer, and will probably even out his average and numbers after a bit, but...it's a very human start for an NL ROY runner-up. Especially considering that the guy he lost to, Ronald Acuna, is showing no signs of humanity in his repeated mashings of the ball.

The good news is that Soto is not alone on this squad. Anthony Rendon, Max Scherzer and Patrick Corbin all have not only the star power, but the upward statistics, to get people in seats. Rendon is definitely able to be the defacto leader, Scherzer is still a HOF-caliber ace, and Corbin is proving that last season was not a fluke with his low ERA and high strikeouts. Additionally, you have Howie Kendrick springing back into the mix in the absence of Brian Dozier's bat, and giving the numbers he was promising before his injury last spring, and Adam Eaton FINALLY delivering on what seems to be a full season of impressive gameplay. Hell, even Victor Robles is finally hitting well at the major level.

The only problem is that this is the NL East in a year where everyone but Miami is competing. And in terms of selling points, the Nats currently have the least of the four competitors. The Mets have their rotation, youth movement, and outfield; the Phillies have their impenetrable lineup; the Braves have their young stars and strikeout artists. The Nats have some good players in various places, but complete units aren't excelling. And until they do, the Nats may have to suffer being a good team in fourth place.

Coming Tomorrow- A figure at the center of some controversy right now, in that he's a player on the south side of Chicago that's decided to do well this season.
Posted by Jordan at 7:55 PM