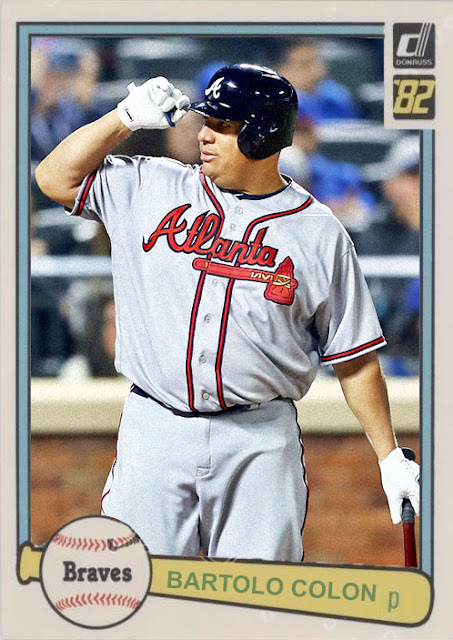 I was watching the World Baseball Classic a few weeks ago in my uncle's living room in Fort Myers, which is nice, because the actual WBC was happening a few hours away, and it's nice to be that close to something. It was...gosh, I have no idea who was playing. It's been a few weeks.

Not like a metaphorical sign or something. Someone was literally holding up a sign that I remember. He was sitting behind home plate, had a gigantic beard, and he'd re-jiggered the W.B.C. initials to make them say:

And they had a little picture of smiling Bart below it. Everytime they cut to that guy with the sign, I started losing it. Firstly, because he stared at the camera with this Brian Wilson-esque intensity that I couldn't help but appreciate, and secondly because it was such a funny sign, and a great juxtaposition. Some of the greatest players in the world are playing right now, but SCREW IT! WE WANT BARTOLO COLON!

That sums up what has become the LEGEND of Bartolo Colon, a guy who made his MLB debut 20 years ago, has a Cy Young under his belt, is well into his forties, yet still EARNS an MLB contract with his fantastic throwing arm, which I've always thought has been cured by some ancient cuban mystery cream that de-ages his arm by ten years. There is no sense of...sanity present, when talking about Bartolo Colon. He has defied the concept of right and wrong.

Sometimes I even think if we're living in the correct universe, like some sort of alternate reality dissonance (like the Sinbad genie movie that doesn't exist). I remember Bartolo Colon sort of fading into the mist after a poor season with the White Sox in 2009. Maybe there's a universe where he retires there, and nobody really thinks twice about it, instead of the one we're living in now, where he spent a YEAR retired, then made a decent comeback with the Yankees, made an even BIGGER comeback with the A's, then got back to superhero status with the Mets, complete with an All Star gig, and now is one of the most beloved players in the game, pitching for Atlanta.

I don't know how he did it. A few years ago, he was caught taking HGHs in Oakland (as you do, apparently), and I kinda thought he was done for. I publicly SCORNED the Mets for picking him up, before they turned him around, cleaned him, got him some Shake Shack burgers and made him an All-Star.

So what is it that makes Colon such a star? Well...maybe it's the underdog quality. Think about an overweight, smiling guy in his mid-40s that's still on an MLB roster, surrounded by entitled thin, well-built kids in their 20s. You want him to succeed because he stands out so much, and you don't want him to, well, NOT succeed. Plus, he can still strike people out, and every once in a while he can get a hit. Last year he hit a home run, his very first one. You kinda want him to do more.

It's this unexplainable phenomenon that...okay, I sort of just explained, but it's even more confusing when you put it into words. I have no idea how many years BigSexy has left in him, but he's one of the moral centers of the Braves rotation, and seeing him (and R.A. Dickey while we're at it) mowing people down this late in their career is pretty great.

'We Want Bartolo Colon'. Well, yeah. Everybody does.

Coming Tonight (?): A piece of evidence that the Twins might not be too bad this year.
Posted by Jordan at 11:11 AM