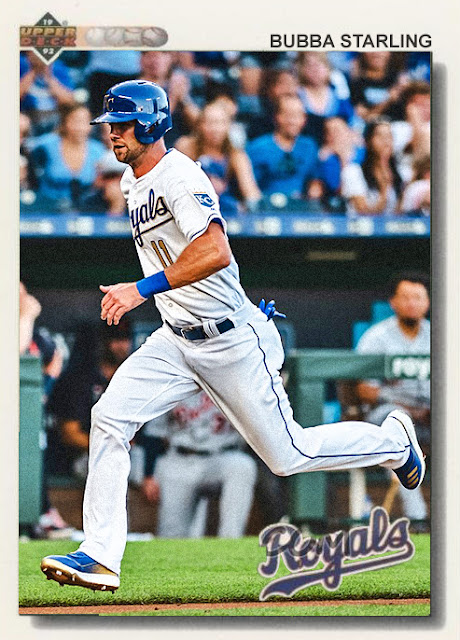 Yeah, after 13 years we finally have another MLB player named Bubba. I was kinda missing those, and it brings me back to 2004, when you could have guys named Bubba and Chad and such on your team, and it'd totally be okay.

2004 is also a year that this Royals team is flashing back to, or really just the mid-2000s in general. The era where the Royals didn't have a shot to compete, but could be a little fun despite the blazing ineptitude. And having a guy named Bubba Starling as a premier homegrown hitter does harken back to the days of Matt Stairs or Calvin Pickering coming into KC and just hitting without a care for standings.

And that's what we've got. We do have some league talents, like Whit Merrifield, Hunter Dozier and Jorge Soler, and we have some mildly amusing guys like Starling, Cheslor Cuthbert and Meibrys Viloria, but...other than that, it's all kind of a wash. The pitching is nonexistent, save for some good starts from Mike Montgomery and a great season of closing pitching from Ian Kennedy. The bench is scattered, as is the team now that players are in and out of the minors, and that Billy Hamilton's been dealt to Atlanta.

All that's really left in KC is just nostalgia for a team that was a competitor 4 years ago, and only has a few members left. And...Daffy Duffy's mediocre, Salvador Perez is hurt, and Alex Gordon had a big start but has looked very normal recently.

I hope Bubba Starling continues to be a good asset for Kansas City. I knew it took him a while to get up, and I'm glad he's making the most of it.

Coming Tomorrow- The Reds are sneaky as hell. They let Yasiel Puig leave, and make it look like they're vulnerable and don't have a viable replacement...but not only did they have one all along, but...he's AWESOME!
Posted by Jordan at 8:41 PM