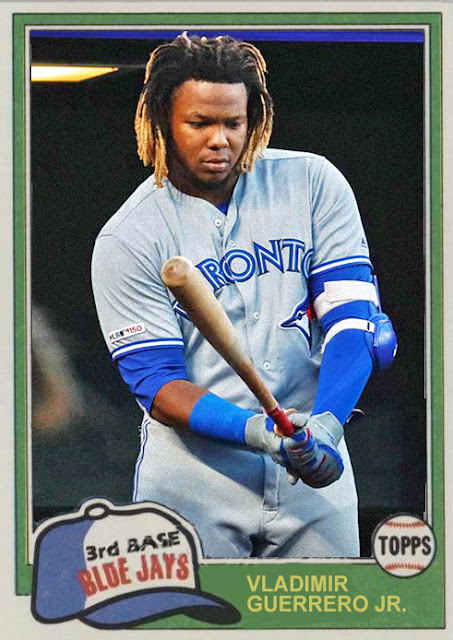 So here's the weird part of the Blue Jays' lineup first.

Justin Smoak, at 32, is the oldest member of the lineup, and the oldest player on the active roster. He's a free agent next year, and I imagine he's rightfully getting out. At that point, the Jays' starting lineup will consist of a bunch of people under 28- Teoscar and Grichuk will be 27, Gurriel will be 26, Biggio, Jansen and Tellez will be 25, Bichette will be 22 and Vlad Jr. will finally be able to have a beer in the US. It'll be among the youngest lineups in baseball, and they'll be banking entirely on the youth movement that'll be taking full force this year.

...if said youth movement eventually spreads to the rotation, the AL East is gonna be in big trouble.

I mean, look at Vladimir Guerrero Jr., who the team's thinking will be the team's centerpiece, and already kinda is. In 93 games he's hit 14 homers, 54 RBIs and only 66 strikeouts. It's a solid, if quieter, debut for Vlad, who's been touted as a mega-prospect for years, and whose presence the farm system was even built around, let alone the roster. Now you have other sons of MLB legends, like Bo Bichette and Cavan Biggio, joining the cause, and Bichette is just as impressive as Vlad, with that super crazy doubles record he set...which was dwarfed by Aristedes Aquino's HR record a few days later.

I honestly see this Jays team ending up looking a lot like the Astros- 3 or 4 guys coming up at around the same time who can all trade off leading the league in things, getting various awards and...yes, this may include another playoff run, I'm sad to say, but...knowing the way these guys can hit, I imagine it'll be a playoff run that's known early enough that it won't piss me off by coming up out of the blue in July (like the last 2).

I also foresee Vlad's 2020 season being even bigger than this one, and...seeing as people are hitting the ball out like never before (thanks Mr. Manfred), I imagine he'll lend his name to the HR leaderboard next year.

Coming Tonight: A hard-hitting first baseman for...a team that can't decide whether it wants to tank or attempt the WC run.
Posted by Jordan at 9:52 AM