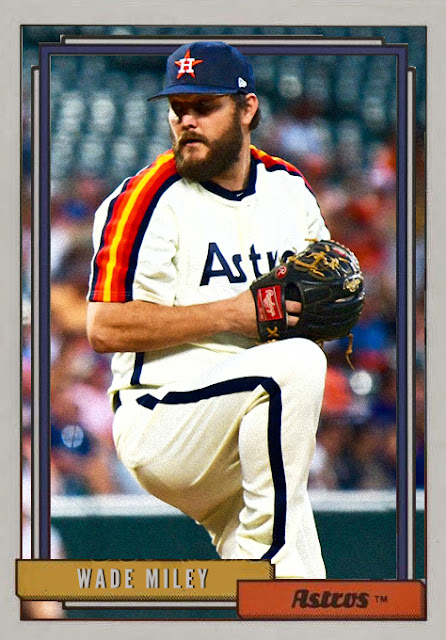 The benefit of pitching for the Astros, or perhaps the curse, is that you can have the best season of your career and not be too far into the spotlight. That's what happened with Charlie Morton last year, and now he's still an under-the-radar threat in Tampa. And it's what's happened with Wade Miley, the once-strong...then inconsistent Louisiana starter who spent a few years in limbo before making an impressive comeback with the Brewers last year, pitching into the postseason for the first (and not the last) time in his career.

And now that he's in Houston, behind Justin Verlander, Gerrit Cole and Zack Greinke, Miley is pitching a 12-4 record, a career high W/L percentage, with a 3.18 ERA and 125 strikeouts. Compared to the big two, it doesn't look like much, but it's still a phenomenal run from Miley, who's having the best numbers of his career at 32, and is having a career renaissance years after people had written him off.

The one thing I can't tell with this season is whether it's the environment or the arm that's doing this. Miley's always been capable of good things, but are the less spectacular aspects of him not showing up because he's on a red-hot 1st place team? I mean, for a period, Gerrit Cole was giving up too many runs, but not he's got some amazing strikeout numbers and a better ERA, so they've all shut up. It'll be interesting to see if Miley pulls a Charlie Morton and takes this success to a smaller market with good results.

Meanwhile...the Astros are just gonna coast on til October. I'm not seeing many bad aspects of this team. Yes, Maldonado's slumping, but they have Robinson Chirinos so I'm not worried. Correa's injured again, but Myles Straw is fine. Sanchez is out for a while, but Brad Peacock is still a fine 5th starter. It's the Astros, for crying out loud! You want structural issues, go to San Diego!

I'm just glad that a journeyman veteran like Wade Miley gets to be in on the success.
Posted by Jordan at 11:20 AM