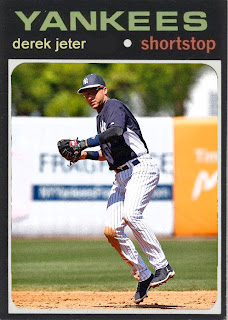 The last time I made a true, actual Derek Jeter custom, not a recobbled one, it was 2010. I haven't made a Jeter custom since their thrilling heartbreak in the playoffs. Not that one, the other one. So finally, I've made a pretty awesome custom of Derek Jeter playing shortstop, making the routine throw to first, doing what he does best.

However, the Yankees will be finding out how tough it will be to do what they do best in 2013. Their stars injured, their pitching improved slightly, their infield aging, their replacements uncertain. What seemed like a bonafide lock for 2012 has turned into a questionable 2013 team, which is sad.

That doesn't mean the Yankees are out of it for sure, though. Like the 2012 Phillies, hidden beneath the injuries, the questionables, and the doubt, there is hope. I think that when Granderson, Teixiera and maybe even A-Rod and Pineda get back, the team will be stronger, and go on an absolute rampage. I think that a team's fate can't be decided 13 days before the season starts. I think that the Yankees are going to do well SPECIFICALLY because everyone thinks they're NOT going to do well, just like the Blue Jays are going to end up in third because everyone thinks they'll be in first.

Yeah, I said it. The Yankees will not be terrible in 2013. And I'll yell it from the rooftops.

Coming Tomorrow- That was a good run, wasn't it? Now I need to make more customs. Any requests? Is there anyone I've never, ever made a custom of in my five year run, who deserves one?
Posted by Jordan at 8:42 PM

Labels: Custom Cards, Derek Jeter, I have an opinion, Yankees