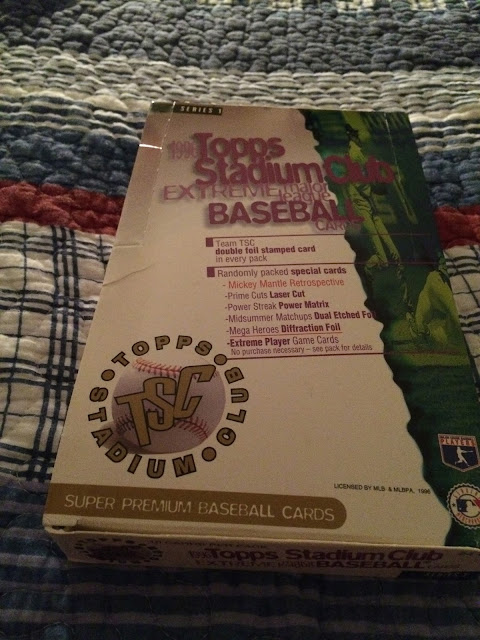 In 2011, I was in Meredith, New Hampshire, and I found the one legitimate card shop in the Lake Winnapesaukee area, which was a nice little mom-and-pop card-ery. And yes, they had singles, but my main draw was the little array of cheap hobby boxes he had there. So, seeing something I liked, I picked up a box of 1996 Topps Stadium Club Series 2, for a discounted price (because this was a nice guy).

For the first time, I decided it'd be cool to post it on the blog, therefore giving the forerunner for the new, bestselling Nostalgic Box Break series that's been going on for a few years now. I'd link to the original posts, but it was an admittedly earlier attempt at a break, and I was trying to shoehorn it into a contest that...needed a few more rewrites. I'll let any diehards try and find it themselves.

Now, five years later, in the midst of my quest to collect every great Stadium Club set ever, I come back to 1996, with a box of 1996 Series One.

Some notes here. In my opinion, 1996 SC is the last great set in the series. After this, Stadium Club would be come smaller, more insert/hit-oriented, and way harder to collect. It was already becoming evident here, as I didn't do well in terms of set-completion (I'll be posting a want list...eventually, I think). However, the design was basically a step above the '95 release, and the photography was some of the more consistently cool stuff they'd have for a while. 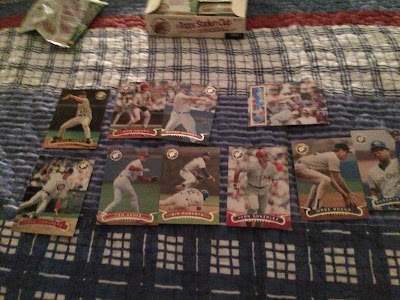 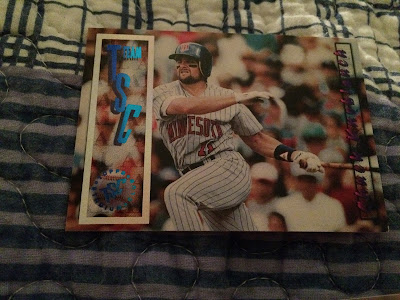 Every pack comes with one Team TSC card- it's a subset, sort of like the ones in '95 High Number, but they're basically a list of leaders, rookie stars, etc- and there are a ton. Here's Chuck Knoblauch, right before joining the perennial W.S. Champs. 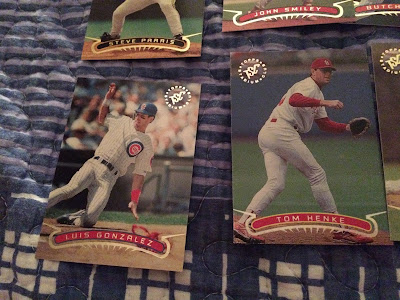 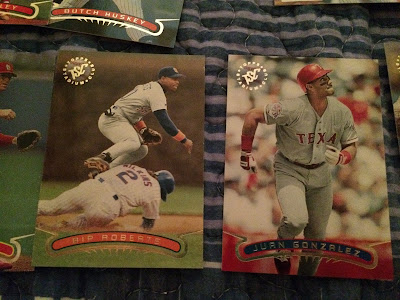 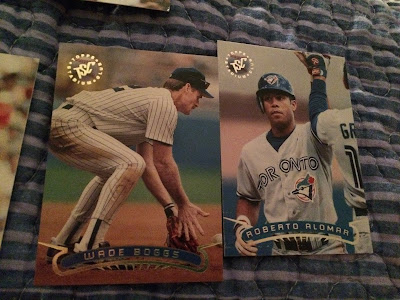 Plus, two really cool HOF cards- Boggs fielding, waiting for his very first World Series ring, and Roberto Alomar congratulating his teammates, just finding out of his deal to Baltimore. 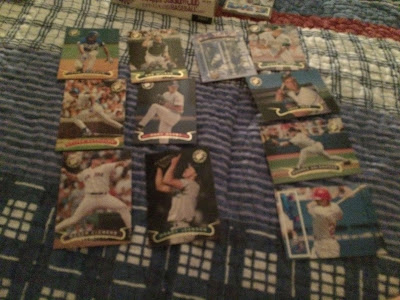 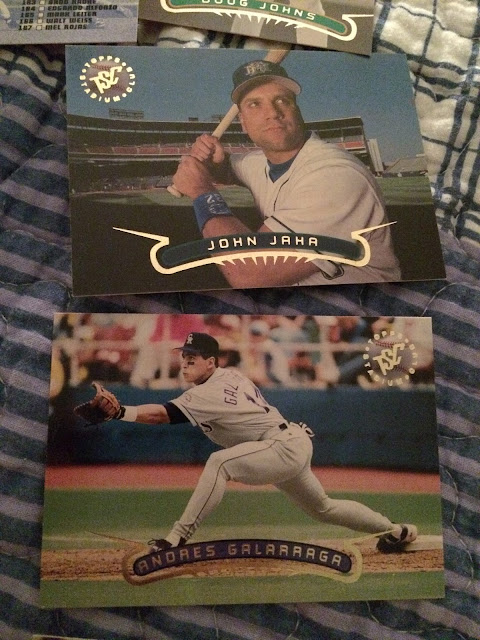 John Jaha's card is another reminder that the Milwaukee Brewers had the best cards of the 90's. Also, Galarraga's is a pretty cool lunging 1B card. 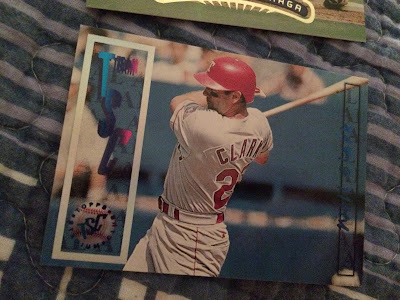 Our Team TSC card was Will Clark, still a pretty nice player in '96. 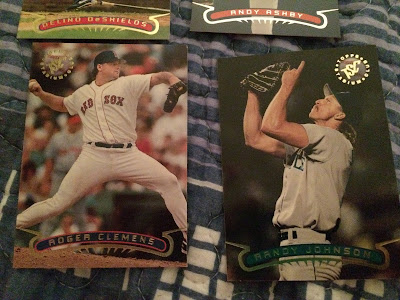 Two of the most dominant pitchers of the 90's. Johnson's going in my collection, though. 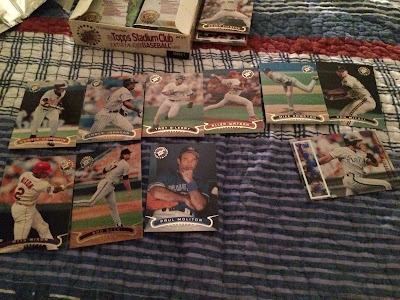 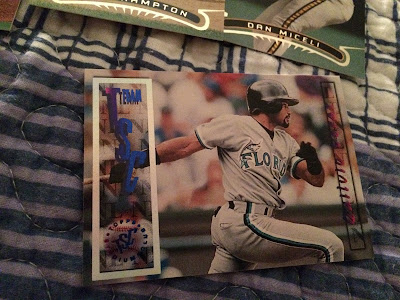 Quilvio Veras was the Team TSC insert in this pack, which says a lot about the '95 Marlins. 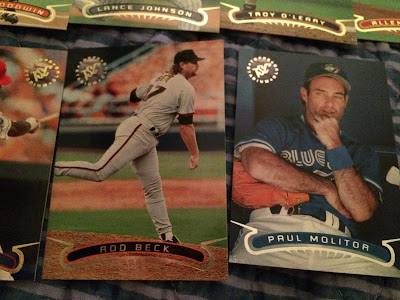 In terms of cool star players, all that was here was ultra-closer Rod Beck, and HOF-er and...Twins manager for another year (?) Paul Molitor. Actually, he was on the Twins in '96, so this photo's sort of wrong. 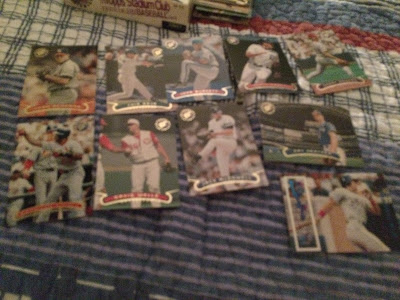 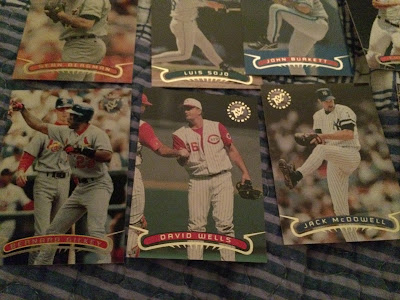 David Wells, for half-a-season, was a Cincinnati Red. Weird, right? In '96, he'd be an Oriole. Also, Jack McDowell was still somehow a Yankee, though I doubt he was on hand for their victory parade. 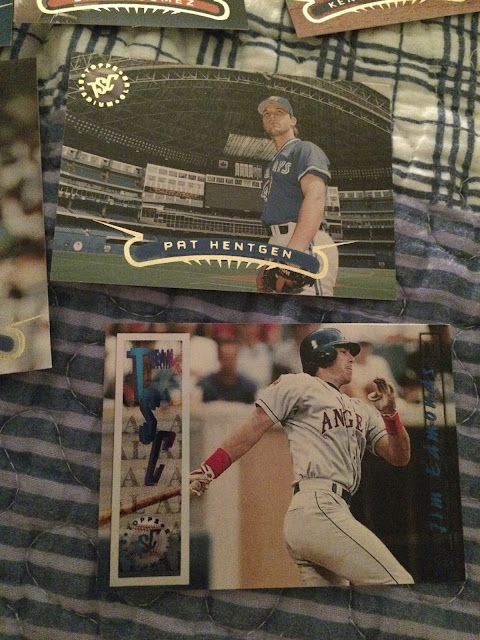 That Hentgen shot is a beauty, worthy of the eventual Cy Young winner. Also, Jim Edmonds is our Team TSC, and it's a pretty cool one. 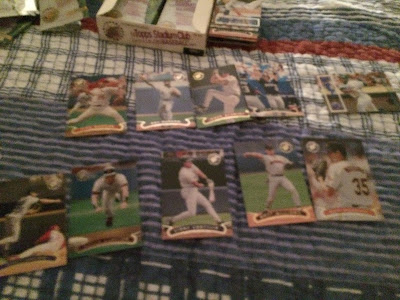 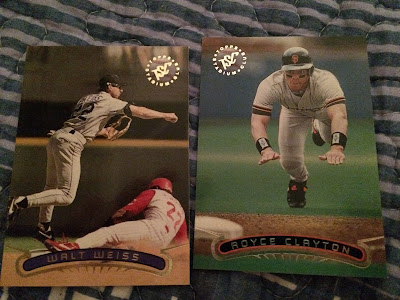 Walt Weiss, still an all-star caliber defender in '96, turning two, while Royce Clayton is doing his best Christopher Reeve impression...in that I'd like to see him trampled by a horse. 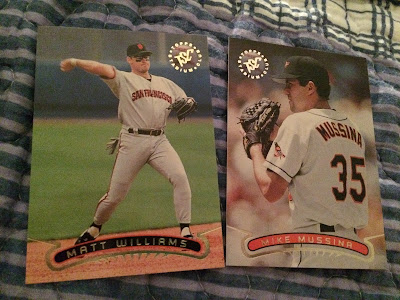 Also, Matt Williams was about to embark on his last season in San Fransisco, before his amazing World Series season in Cleveland and his World Series WINNING stint in Phoenix.
Also, Mike Mussina was still powerful as ever in Baltimore. 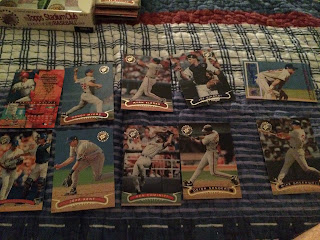 Klesko was a nice bat in Atlanta, and Joe Girardi's probably one of the better defensive catchers of the 90's. Of course, now he's the Yankee manager and everyone loves him. 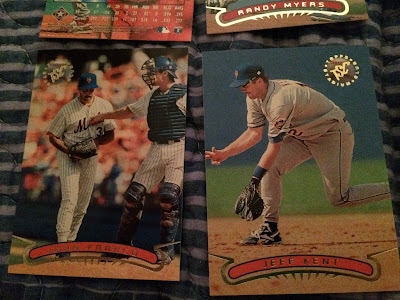 Two Mets, one was still a killer closer, the other would need a trip to SanFran to gain his full power. 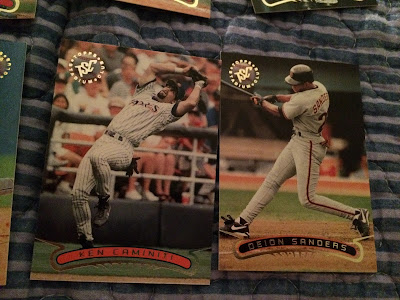 Ken Caminiti was a year away from an MVP. Deion Sanders was a few years away from just sticking to football. 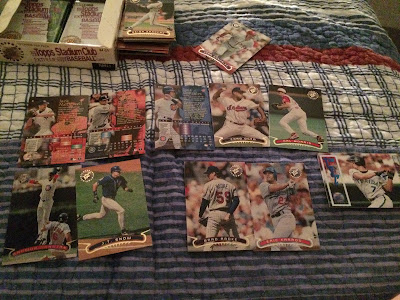 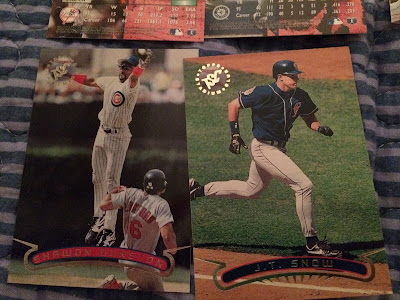 Shawon Dunston has a great play in the field, and J.T. Snow has a nice running shot. 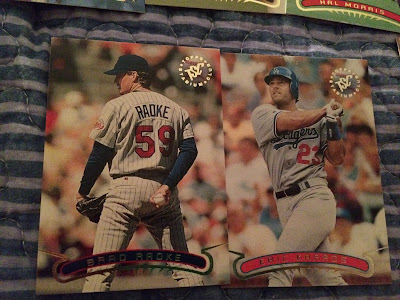 The shadows on this Brad Radke card are pretty cool, plus here's a card of Eric Karros being kinda awesome. 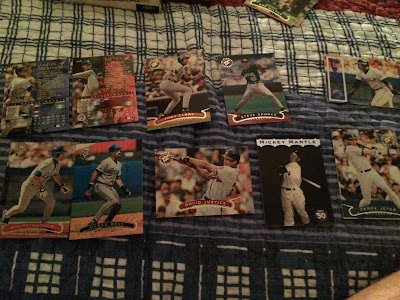 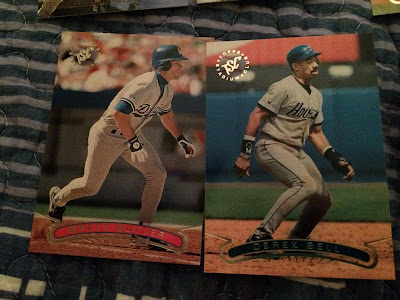 Brett Butler, here in his final season in the bigs. Also, Derek Bell was 26 this season- this photo makes him look 46. 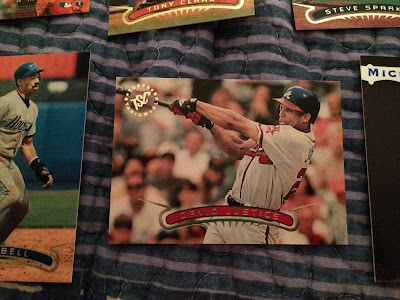 David Justice was still a standout in Atlanta, but would eventually move to Cleveland. 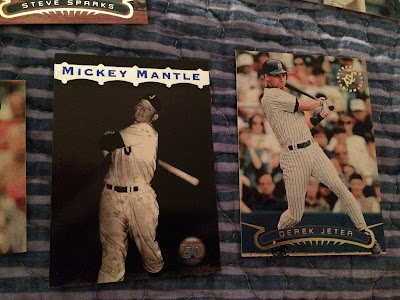 On the left is an insert of Mickey Mantle, which is a pretty nice pull. On the right is a generally early-era card of Derek Jeter. Two of my heroes in the same pack. Well done, SC.