The Stars are Out: Best of the Rest 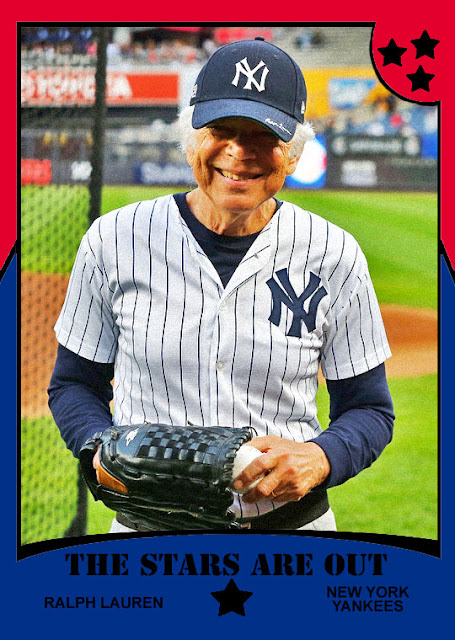 On this rare, baseball-less day of October, I figured I'd roll out the remaining Stars are Out customs I've had in my folder. Most of these are fairly recent, too, with a few coming from playoff games.

We'll start with Ralph Lauren. Because...I mean, one of the most well-known clothing manufacturers in the world wearing a Yankee jersey is a rare enough sight as it is. 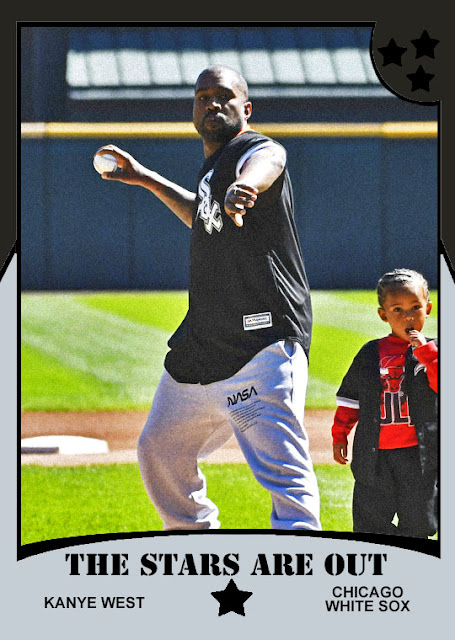 I'm gonna...curb a lot of my comments here. I mean, on one hand...yeah, it's cute that he and North came out to Guaranteed Rate Field and threw out a first pitch. But...on the other hand...okay, I'll do the criticism that'll piss the fewest amount of people off- dude hasn't put out a good album since My Beautiful Dark Twisted Fantasy. Fill in the blanks yourselves.

...Okay, one more. The hell kind of iPhone passcode is '000000'? I mean, really? You of ALL PEOPLE should know about keeping your shit protected.

Okay, I'm done. I'm done. Onto someone a little happier. 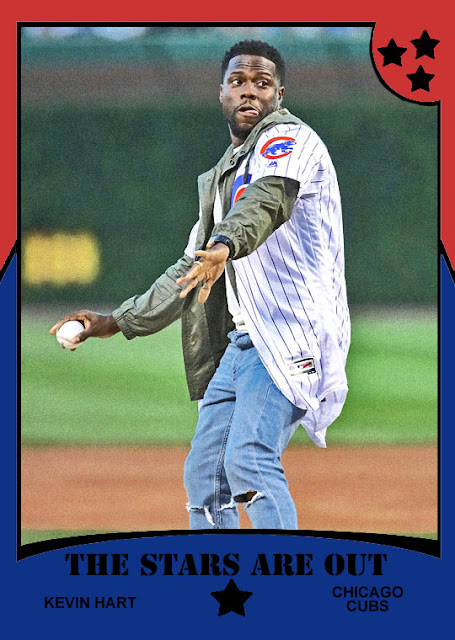 ...Alright, I'll say the other side of Chicago got the win here. Kevin Hart's in the apex of his career, he's making a ton of hit movies, and making people laugh everywhere. But...anyone notice that he does First Pitches in Chicago a lot...and he's FROM Philly? Like, isn't that a little rude to the Phils? We'd love to have him throw one out. 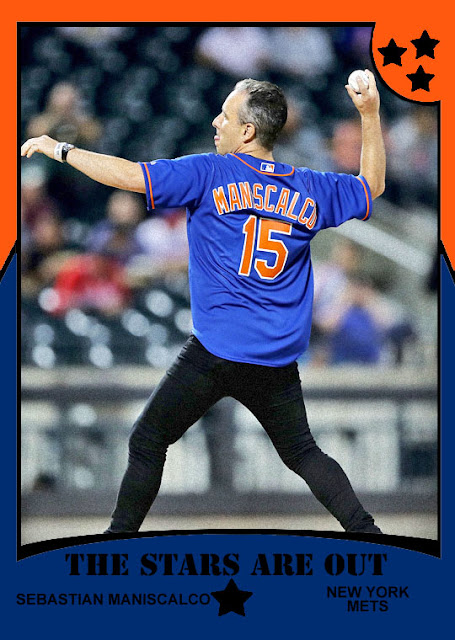 Speaking of comedians, Sebastian Maniscalco may be one of the best working standups out there right now, and I'm glad he's beginning to get more recognition. And, like a lot of comics out there for some reason, he's a Mets fan, so he got to throw one out at Citifield. 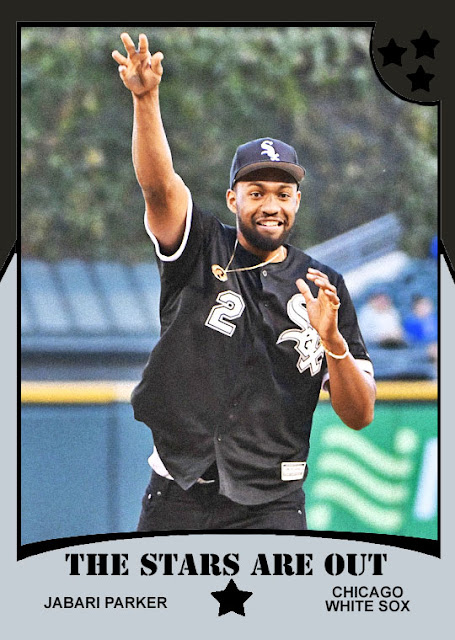 Moving into the category of 'other sports stars', here's yet another Chicago first pitch, this one from Jabari Parker of the Chicago Bulls, looking confident out there. 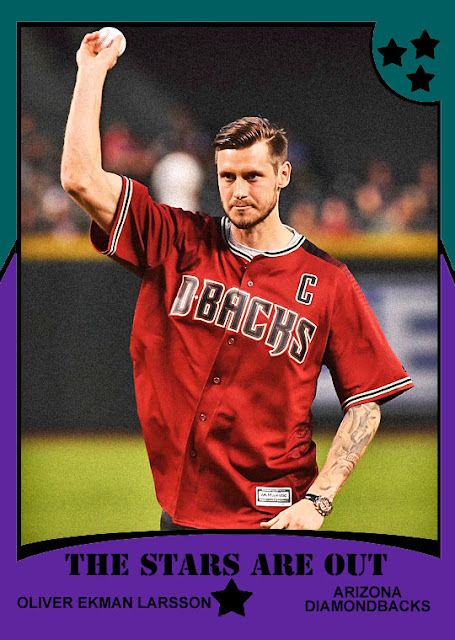 ...and here is noted Coyotes hero Oliver Ekman Larsson, complete with 'Captain' logo adorned on his D-Backs jersey, hauling one over the plate in Phoenix.

And to top that, in Phoenix.. 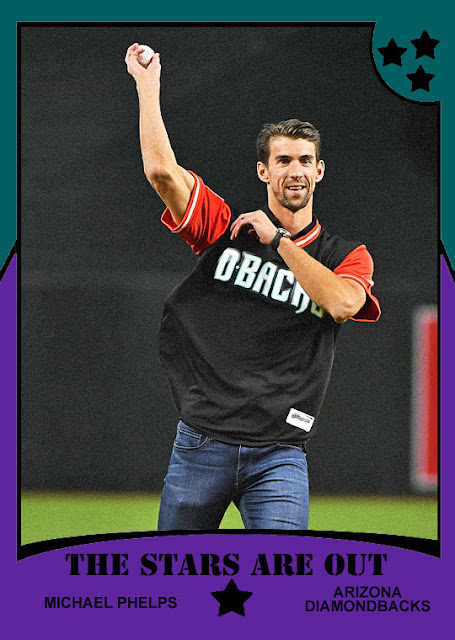 ...uh, yeah, how about one of the greatest swimmers of all time? Big, tall, lanky dude Michael Phelps, in all his gold-medal-winning glory, getting his first pitch in. That's pretty cool. 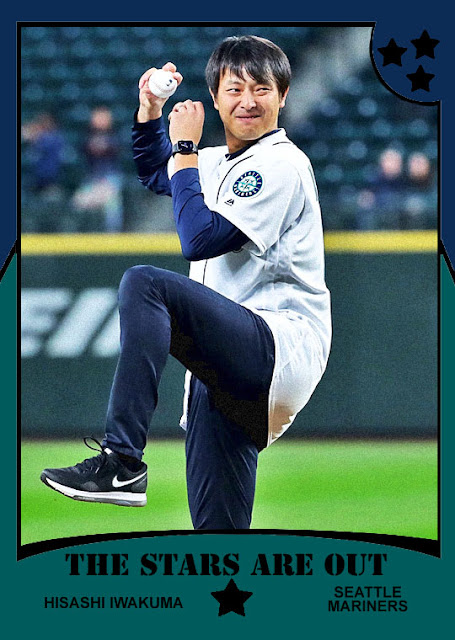 Finally, a couple of MLB stars to play us out. Hisashi Iwakuma retired earlier this year, and was a Mariners hero for a few years, playing second banana to Felix Hernandez a lot, but getting an All Star nod, and throwing strikes a ton. 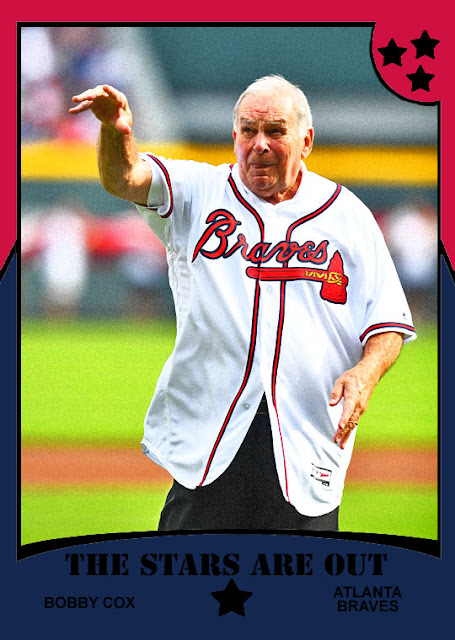 Gotta end on Bobby Cox, though. One of the most legendary managers in Atlanta history, commandeering those classic 90s teams, and a respected team leader all those years. He's also a Hall of Famer now, which is well-deserved.

So, unless we get some more in the playoffs, that'll be the last of the Stars are Out issues for this season. I think we had a good run.
Posted by Jordan at 4:06 PM