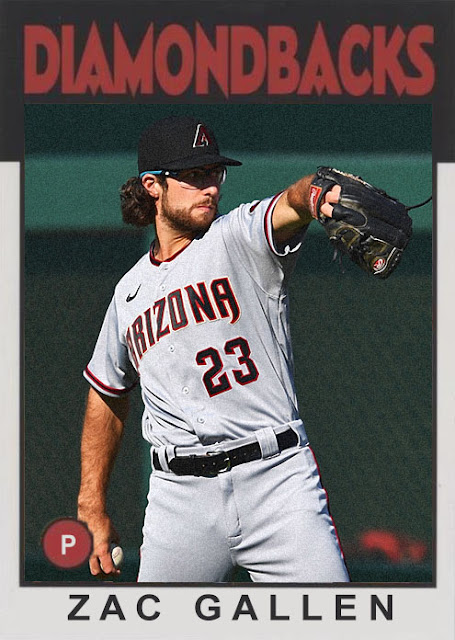 Last year, trade deadline, when I did my usual Top 10 Deadline Deals post, i listed, under 'Zac Gallen for Jazz Chisholm', 'remind me to come back to this one in a year'

So I have. The Marlins were morons to give Zac Gallen up.

Chisholm, in 16 games for Miami, has been batting .136, with 6 hits and 3 RBIs. Not good at all. Gallen, meanwhile, has not missed a start since landing in Phoenix, and in that time has a 3.02 ERA with 119 strikeouts and a 1.180 WHIP. Not too shabby whatsoever. In a rotation that has lost Zack Greinke, Merrill Kelly and Mike Leake in the last year, Gallen has been one of the sole constants, and has been one of the best pitchers on the squad. It's only his second year, and he's coming off like more of a pro than Luke Weaver, Caleb Smith, and even Madison Bumgarner this year.

And yet, as solid as Gallen has been, and has supportive as Kole Calhoun, Ketel Marte, David Peralta, Nick Ahmed and Stefan Crichton have been...this is a bad year for anyone without a full roster to compete in the NL West. The Padres and Dodgers are already gonna cost you some games, so you're essentially playing for third, but...the Giants have become pretty hot recently, and even if the Rockies probably won't advance, they still have more elements working than the D-Backs right now. So Gallen's impressive year might be all for naught, which is...disheartening.

This is a team that needs a major regroup for the 2021 season. Bumgarner needs to make sure he can still pitch, Eduardo Escobar needs to straighten things out, Walker needs to work on his average, the pitching needs to tighten up a bit, and they need to pick a single sort of leadership figure to rally around. This team could be sneaky next year, but not without putting in the proper work.

Coming Tomorrow- Can a championship-caliber team do any damage without competent pitching staff?