The Closer From Oz 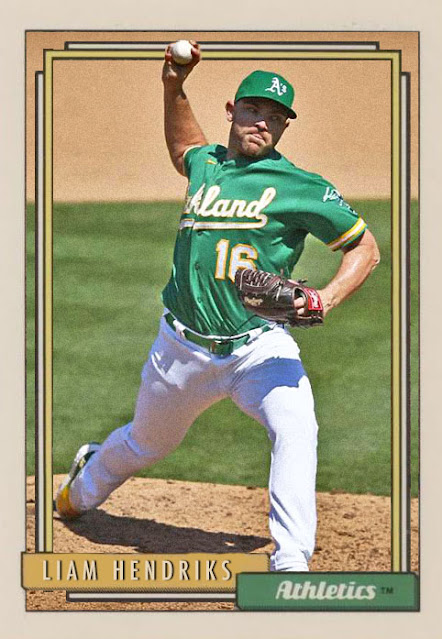 The list of players from Australia to make the major leagues is small, but not without highlights. Ever since Craig Shipley, you've seen a good number of players, mostly relievers actually, make the jump over the Pacific. You get some highlights in this list, like Dave Nilsson, Graeme Lloyd, Peter Moylan, and then you get cases like Grant Balfour, guys who take a little bit to really make it, spend some time in Tampa, and don't really find themselves til their 30s.

Liam Hendriks is also like that. And like Balfour, he found himself in Oakland, and started pitching his best years as an Athletic.

The two aren't entirely dissimilar either. Both can do strong relief as well as ninth inning work, both are imposing as hell, both spent time with a few teams before breaking out [Balfour was with Minnesota, Milwaukee and finally Tampa, Hendriks played for Minnesota, Toronto and Kansas City], and both got their starts closing in wild card efforts from Oakland.

Hendriks right now might have the edge, though. He's leading the league in saves, he's only given up 3 runs on the season, and he's playing for a first place squad that's already clinched playoff berth with a week to go in the season. He's also had his best numbers in Oakland, and is on pace to be even better given a full season next year. Perhaps this is recency bias, and perhaps I am wrong...but Hendriks seems to have things figured out. Which I love.

The A's are also doing great right now, even without Matt Chapman. Jake Lamb of all people has taken over at 3rd and is HITTING FOR AVERAGE? HOW DOES THAT HAPPEN? HOW WITH JAKE LAMB? WHOA.

But yeah, he's hitting .368 and improving on his slow start in Arizona. Rookies like Vimael Machin and Jonah Heim are also beginning to heat up, Mike Minor has lowered his ERA and is playing really well, Chris Bassitt and Jesus Luzardo are leading this rotation, and Sean Murphy and Robbie Grossman are finally coming to prominence in the Oakland lineup. It's thrilling to see the A's this good, and this much better than the Astros.

In order to really do well this postseason, even with a high seed, they're going to need to keep this momentum going, and that includes getting guys like Matt Olson, Sean Murphy and Khris Davis to strike out a bit less and hit more for contact, and catch up with Laureano and Grossman. This needs to be a well-rounded squad if they wanna get further than one rung into the playoffs, and I hope they can figure it out.

Coming Tonight: After being overshadowed by a fellow ROY, a shortstop reclaims his dominance in LA.