Topps Cards That Should Have Been: The 2008 Sunset Seasons 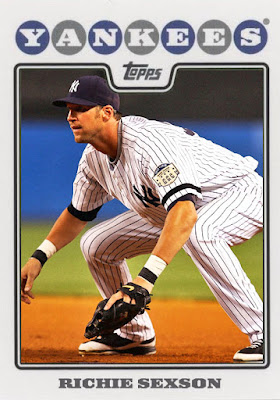 Continuing with my chronicle of all the 2008 Topps cards that Topps never bothered to make, we go to a few players who finished their careers in 2008 and never got recognition from the baseball card magnate from it.

So, uh...remember when Richie Season was one of the most powerful hitters in baseball?

The dude had 262 home runs from 1999 until 2006, making a name for himself as a premier masher in Milwaukee before spending an injury-plagued season in Arizona, then coming to Seattle in 2005 for another stellar year. By 2008, his numbers were dwindling, he was only hitting .212 for the Ms, and they decided to release him in July. The Yankees, in the pre-Tex-era, needed a steady 1st baseman, and got a month's worth of production from Sexson, where he hit .250 in 22 games with his last home run. Not a huge departure, but enough that Upper Deck would make a card of it in their 2009 set. But not Topps. 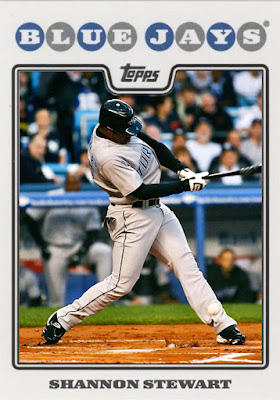 Shannon Stewart, one of the more intriguing contact performers of the 2000s, was coming off a season in Oakland, where he hit .290 with 167 hits and 48 RBIs, not a bad 2007 for anybody. So Stewart's old team, the Toronto Blue Jays, signed him to a one year deal in the hopes that he'd continue his 2007 numbers, or even replicate his .300 seasons in the early 2000s. At this point, Stewart was 34, and had just passed his prime years, and so his .240 average and 14 RBIs in 52 games was a bit lower than expected. The Jays released him in August, and that was the end of the road for the speedster. Like Sexson, Upper Deck produced a card of him in 2009. 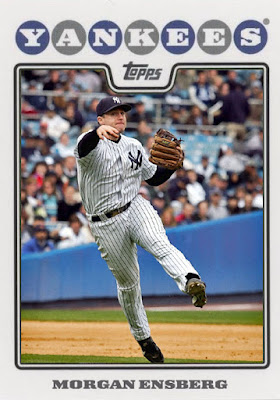 Going back to New York's search for a corner infielder in Jason Giambi's injury-induced absence, the team signed Morgan Ensberg to a minor league deal in Spring Training of 2008. Morgan Ensberg, for those of you unaware, hit 36 home runs in 2005 for the Astros, and 101 RBIs, but...the insane production was limited to that year, and his numbers were pedestrian every other year. Ensberg was traded to San Diego in July of 2007, and was non-tendered, therefore the Yanks could give him a shot. In 28 games with the Bombers, Ensberg hit .203 with 4 RBIs and 1 home run. A far cry from 2008. The Yanks released him.

The interesting thing is that Ensberg does technically have a sunset card in 2008, as the Cleveland Indians would sign Ensberg not long after the Yankees cut him, but Ensberg would not play a single game with Cleveland, making him the second Cleveland Indian from 2008 I have covered in this series that got a card in Update without playing a single game to warrant it. And you wonder why Topps has so many gaps. 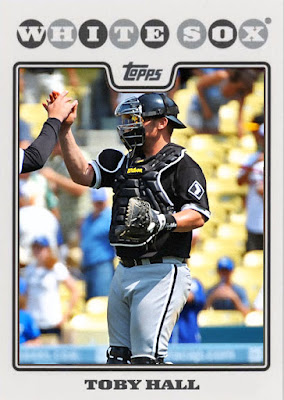 Like Ensberg, Toby Hall is another figure of the mid-2000s that most people have forgotten about. Hall was the starting catcher for the Tampa Bay Devil Rays from 2002 until 2006, was a pretty impressive defensive catcher with the occasional contact hit. In 2006, he was traded to the Dodgers at the deadline, which is when Topps stopped caring about him, and from 2007 to 2008 he was the backup catcher to A.J. Pierzynski in Chicago. 2008 wasn't a bad year for him, as he hit .260 in 40 games with 7 RBI, and was used primarily as a defensive substitution. He was actually signed to a deal with Houston for 2009, but Houston voided the deal, perhaps due to a physical issue. 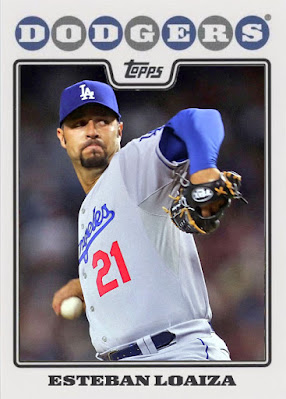 I can't think of many...stranger careers than that of Esteban Loaiza. Guy peaks at 30 after toiling in obscurity for 10 years, nabs 21 wins and a strikeout title with the White Sox and nearly wins a Cy Young, losing to some guy from Toronto named Roy somethingorother. After the 2003 season, Loaiza bounced between teams like a pinball, winding up as a midseason pickup for the Yankees in 2004 [I saw him start a game at the Stadium!] , started for Washington and Oakland, and played for two straight Dodgers teams. In 2008, Loaiza was used mostly in relief, but did start 3 games. He left LA with a 5.63 ERA and 7 Ks. He'd pitch in Chicago, but that was less documented. And then...after he retires, he has a messy divorce and a cocaine bust, and we don't hear much from him anymore.

Wish this post ended on a lighter note, but those are the 5 sunset cards I've got today. Topps should have made these, but they didn't, so I had to.