Does Freddie Get His MVP This Year? 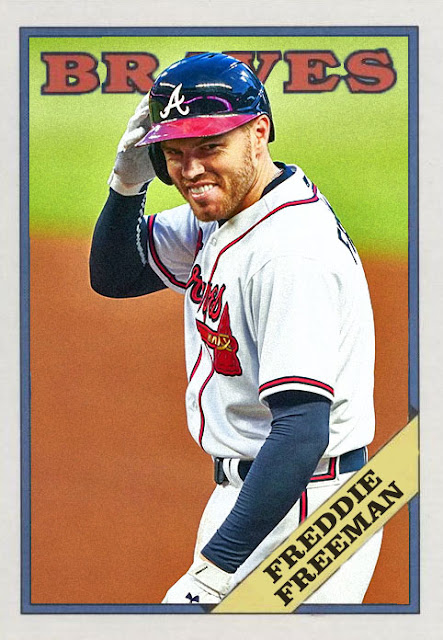 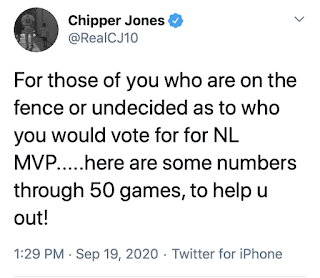 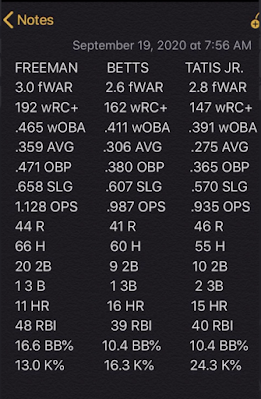 I actually think it's fantastic that Chipper is fully on the Braves bandwagon, supporting the new flagship star, sticking up to his corner infield partner from his final seasons. Sign of class, and as brash as Chipper can be on social media, that's saying something.

However, there's a bit of stats that Chipper neglected to point out:

Freddie Freeman's season has been a gradual ramp up, but it started with a rather pedestrian July. Hell, the first week or so of August was also pretty tough for him. By the end of series' with the Mets and Blue Jays, he was batting .217. By the ninth, his luck starts turning up. Even halfway through the month, he's still hitting in the .260s, letting a Yankees series set him back. It's that series with the Nationals that brings him back to peak levels, and by August 23rd, in Philly, he's finally batting over .300, and hot enough to sustain himself til the end of the season.

Translation: Freddie Freeman got really hot in mid-August, has been hot ever since, and because of that we should forget that he wasn't hot in late July and early August. Right, Chip?

For comparison's sake, I checked the monthly splits on those other two candidates Chipper brought up. Here's Tatis's:

Yes, his woes have been a bit more recent, but still sustained great numbers in the first half of the season.

Okay, a bit similar in regard to the slow start. Here's the difference- Mookie gets to .300 first. August 7, 11 days before Freddie Freeman gets to .302, Mookie gets to .306. And he stays over .300 for the rest of the season. He also has a longer hot streak, and, more importantly, has more 2020 versatility. Mookie has been playing second base this year. And he's been doing pretty well in his few games he's played there so far.

Despite Chipper's zeal, I still think Mookie Betts is the NL MVP.

Look, this team is powerful as hell right now. The lineup is JACKED. Freeman, Ozuna, Swanson, Duvall and Acuna are all hitting at once. Max Fried and Ian Anderson are both shutting down batters, and even if Cole Hamels hasn't completely gotten the rust off, the pitching has enough to sustain things at the moment. The bullpen is better than it's ever been. This is a much better version of the 2019 team, and one that can definitely take on multiple postseason opponents without many signs of wear and tear.

And...it does help that Freddie Freeman might be having his best season. I don't agree that he should win an MVP for it, but...I won't be dissatisfied if he does.

Coming Tomorrow- A guy who threw a no-hitter earlier this year, which is one of the perks of finally playing for a first place team.