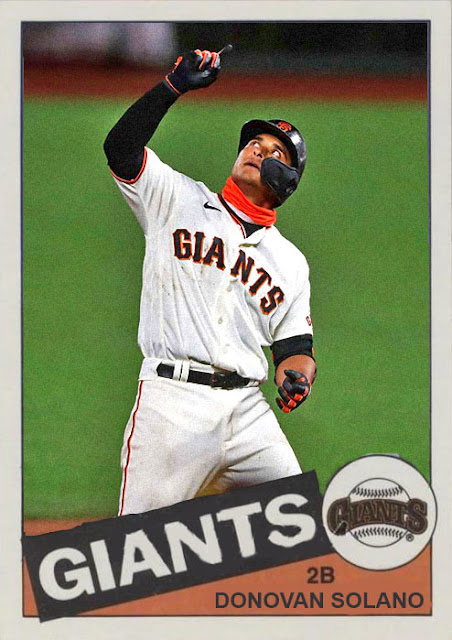 We get one of these every few years, a career major leaguer who never found his niche, started in small markets, and bopped around for a bit before becoming a huge part of a competitive roster and having his best season in his 30s. It happened with Eric Sogard, it happened with Marco Scutaro, and now it's happening with Donovan Solano.

I remember hearing somewhere that if the MLB had, in fact, done an All Star Game this season, at the halfway point, that Donovan Solano would have been the starting 2nd baseman for the NL. Which initially confused the hell out of me, as Solano is barely in the conversation and would perplex most MLB casuals. But then I checked his stats. Right now, Donovan Solano has a .349 average, which is the second-highest in the NL [behind Juan Soto]. He also has 52 hits, 15 doubles and 27 RBIs. This is Solano's most accomplished season yet, and it's his most full-seeming season since his years starting for the Marlins.

It's also the centerpiece of one of the most unlikely comebacks of the year. The Giants spent the early part of the season tanking and relying too much on the laurels of elder members like Hunter Pence and Pablo Sandoval who weren't hitting. Well now both are gone, the youth has taken over, and the Giants are holding onto the eighth playoff spot, a few games ahead of Colorado and Milwaukee. I think it's pretty well deserved. Granted, it took Belt and Crawford some time to heat up, but the contact guys like Solano, Mike Yastzremski, Alex Dickerson, Austin Slater and Wilmer Flores have lifted this roster.

Plus, it's been full of surprises. Darin Ruf has been one of the most unlikely bench players for SF, and he's still hitting really well. Joey Bart has been impressive since the call-up, hitting .262 with 17 hits and 5 RBIs. Trevor Cahill and Kevin Gausman are having comeback seasons in the rotation. Tony Watson's having his best season in years. It's all sort of coming together.

The Giants have to play Seattle, Oakland, Colorado and San Diego, all borderline-to-definite contenders, so hopefully they'll be able to hang on and slide into the playoffs, even if it is a low seed. After the last few years of mediocrity and veteran-emphasis, it'd be cool to see these guys spend some time in the postseason.

Coming Tomorrow- So apparently there's a catcher a year or so away in Baltimore that's gonna blow the MLB to pieces. Man, hope there's not a catcher in Baltimore playing well right now so it'll be more difficult for him to come up when he's ready...OOOP.