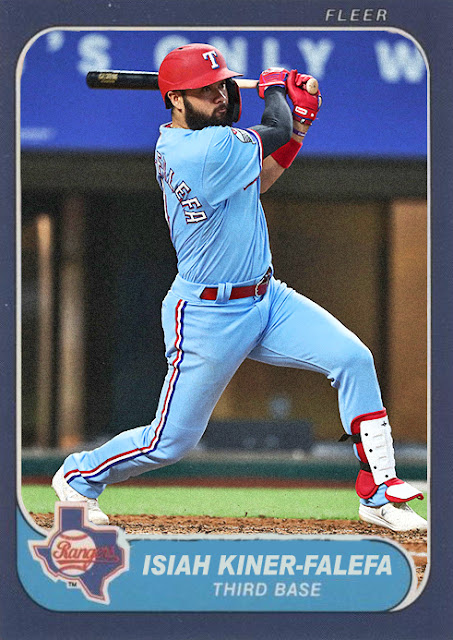 The Rangers shouldn't have traded their outfield to have two slumping pitchers and an ace who only pitches an inning this year.

I mean, regardless of how they're playing this year, would this team be better off if Nomar Mazara and Delino DeShields had stuck around? YES! Right now their outfield is Leody Taveras trying his best, Joey Gallo back to his old habit of refusing to hit for average, Nick Solak doing well with a low WAR, and Willie Calhoun popping in when he feels like it. Both catching options, Eli Huff and Jeff Mathis, aren't hitting, so Robinson Chirinos being traded certainly hasn't helped. Danny Santana, Elvis Andrus, Jose Trevino and Shin-Soo Choo are all injured, Rougned Odor once again refuses to help, and...Isiah Kiner-Falefa and his .312 average is the sole factor lifting this lineup.

It's insanely sad to see the Rangers' lineup look so lifeless, especially considering how powerful a lot of these parts could be separately. Just having half the team injured and the other half not hitting for average feels like a crushing blow to a team that was stocking its pitching to legitimately compete this year.

And as for the pitching, obviously Kluber's injury was disappointing, but Kyle Gibson and Jordan Lyles have been a bit too inconsistent, both having 5+ ERAs. Even Kolby Allard's is above 8 now. Yes, Kyle Cody seems to be good over his first few starts, and yes, Lance Lynn might be a sneaky Cy Young candidate this year, but...think about how awesome this pitching staff looked in February. How disappointing is it that only Lynn had a good year this year? How much of a letdown is that?

Coming Tonight- When the Diamondbacks traded Zack Greinke to Houston, they traded for Mike Leake to ensure that they'd have an ace in 2020. Leake opted out this year. I bet they didn't think the other pitcher they traded for last deadline would be the ace this year.