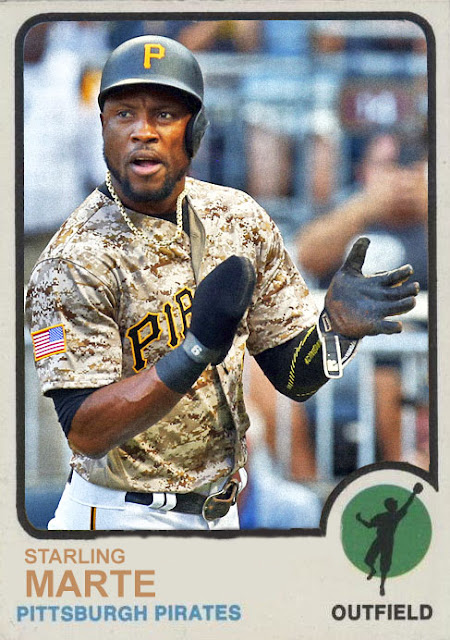 The story so far: earlier this year, Starling Marte was exposed as a user of human growth hormones. This had made people very angry and has widely been regarded as a bad move.

Before this season, Starling Marte was creeping up my list of likable players, as he was lifting Pittsburgh single-handedly last year, and he'd been slowly growing in power. However, this season his HGH usage was made public, and...as I do with most HGH users, I didn't think too kindly of him.

I honestly think that only two players have ever rebounded from HGH usage in my mind- Andy Pettitte and Carlos Ruiz. Pettitte because he legitimately used them to rebound from an injury, and Chooch because...he's Chooch. I can't stay mad at Chooch.

But Marte was different, because I had seen him at PNC Park, but...I didn't really have too much attachment to him, good as he was. I do think that his admission that it was wrong, and his desire to never be painted in that light again proves that his heart is definitely in the game, and...I'm gonna give him a small chance. Like Dee Gordon.

Sadly, other than that, there wasn't a ton to talk about in Pittsburgh as far as baseball is concerned this year. Pens won another cup, hooray for that, Steelers are great again, that's awesome. But it looks like the Pirates are back to being effete and ineffective, which is kinda sad. Hopefully their 2018 can be a little better.

Coming Tomorrow- Rookie outfielder for a team that somehow still thinks they have a chance.
Posted by Jordan at 8:11 PM