The One Good Thing That Happened to the Yankees Today 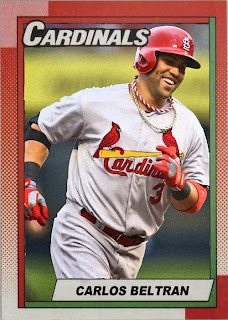 The good news is that Carlos Beltran is proficient in hitting home runs. Plus, he used to be one of my favorite non-Yankees, so now it's kinda nice that he is a Yankee. I mean, he and Soriano could do big things together this year.

The bad news is we have him for three years and he's 36 now. Assuming he ages like a normal human being, Cashman will once again be banging his head against the wall come 2017.

But still. We got somebody today, and it's Beltran. That sort of takes the sting out of the whole 'losing Cano and Grandy' thing. Almost. Not all the way, but almost.

That's the thing. The one, silver lining to this crap sandwich is marred by the fact that our one big acquisition of the day, as awesome as he is, is gonna age. Because Brian Cashman can only count starting from 29.

But I'm glad we got him. Beltran, McCann, Ellsbury and Alfonso Soriano on the same lineup. Watch out, Red Sox!
Posted by Jordan at 3:21 AM