Sorry for the lack of posts lately, it's because of the lack of...anything, lately!

Anyway, I'm going to be starting a new series called "the Rundown", in which I search the web for an entire series, then post all the cards

from that series. The new Baseball Card Database has Topps 1996, so that's a pretty good place to start. I will be skipping all the All Star cards, and I will get back to them later, after I'm done. When I talk about each card, I will say how there career went before the card, and then after the card, and other quirky things.

The first few cards from the series were draft picks that had been acquired before the cards had gone to print. Our three cards today were part of those.
Before the card- Todd Helton didn't have any cards
After the card- Todd Helton became a superstar in Colorado after his rookie year. He made a few all star teams, was a fixture at 1st base and was an all around good player.
Player Rating- 7. This guy has potential
Chance of getting into the Hall of Fame- 60%. Todd's an okay player, and he just doesn't seem to match up to the numerous people in the Hall of Fame.

Again, rookie card, and draft pick.
Before the card- nothing.
After the card- Mark didn't get started until 1999, where he pitched for a few years until he was traded to Detriot in 2001. After that, the once great pitcher ended up getting tossed between the Marlins, A's, Pirates, Royals, Braves and Rockies, where he still pitches.
Player Rating- 3. Not what he used to be.
Chance of getting into the Hall of Fame- 10%. Small chance.

Rookie, draft pick, blablablablabla
Before the card- nothing
After the card- Michael played for Montreal for a few more seasons until he was traded to Chicago, where he was an awesome catcher and he was best known. Then, in 07, he was shipped to the Padres, where's been ever since.
Player Rating- 5. Okay player.
Chance of getting into the Hall of Fame- 50% could go either way if he gets better.

I'll just knock out the rest of the rookies tomorrow.

Posted by Jordan at 3:40 PM No comments:

So sorry I haven't posted in a while. Not much has happened.

I might buy some cards this weekend. There are only a few I know I need, and Dan might supply me with one. Speaking of, he's no longer doing that blog with me.

Again, boring week, but I haven't bored the week yet.
Posted by Jordan at 5:08 PM No comments:

What is wrong with this picture? 2009 Upper Deck CC Sabathia

This is the first of an ongoing series at Mint Condition, where I ponder the craziest cards and ask "What's wrong with this picture"

Let's start today with CC Sabathia. Yeah, he was an awesome pitcher for the Tribe, wasn't he? He was a great starter for so many years, until he was traded to the Brewers. There, he stayed for half a year until he signed with the Yankees this year. Most card companies didn't get that last one when their cards went to print and we were left with 1000 2009 CC Brewer cards- much to Thorzul's delight.

Let's review his 2009 UD Game used card, shall we? And his UD Spectrum Game used? What's the problem?

THEY ALL HAVE HIM IN A INDIANS UNIFORM!!!!

Even though they all have the Brewers logo, they all feature him in Throwback Tribe garb.

AAAAAAARRRGGGHHHH!
Posted by Jordan at 12:22 PM No comments:

Labels: SPx, what is wrong with this picture

And now for something completely predictable 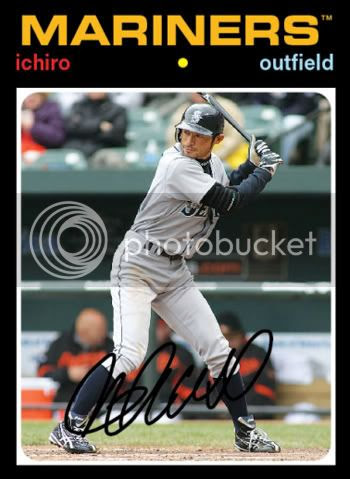 In case you haven't heard, Topps has been suing Upper Deck because of the OP-Chee insert series that has taken Topps' 1971, 75 and 77 designs without permission. As soon as the notice came out that UD was doing this, we knew this was going to happen.

Harry Kalas and Mark Fydrich- now playing for the Angels.

In the same week, we lose three baseball greats.

Harry Kalas was a great broadcaster and will be missed.

Mark Fydrich...not so much. He was like the Carrot Top of baseball.
Posted by Jordan at 3:37 PM No comments:

Labels: Playing for the Angels

As you can see, 3/4 pack extravaganza has become a regular feature, whenever I can get my hands on the stuff.

Anyway, it's easter, and while other kids opened little plastic eggs with glee, I didn't. I went to local Target and got a few packs of Topps. I'm almost finished with Series One, but I'm still looking for Kotchman, Edwin, Maddux and Price.

What are we waiting for? Let's rip!

261- Jose Bautista. Eh, not that much to brag about.
116- Omar Infante. Plays like an Infant(e)
171- Jeff Bailey. BOOOOOOOOOOO!
114- Chris Dickerson. Who?
162- Mike Cameron. Have him. Something to trade.
81- League Leaders. Howard, Dunn and Delgado.
Legends of the Game Cy Young. Nice!
Topps Town Johan Santana. Awesome!
196- Jason Motte. Wait-who?
33- Jose Guillen. Once confused for Yuniesky Betancourt.
142- Brad Penny. Good Player, have him and BOOOOOOO!
156- Carlos Pena. According to the picture, otherwise known as PEE-na.

In the end, not very impressive packs, maybe because I only need a few cards. Should have gotten UD.
Posted by Jordan at 9:30 AM No comments:

What a loss.
The Angels were going to get really big with this guy, and then we lost him.
I only have one card of him, in that elegant UH pose from 08. It still counts as a final bow.

Labels: Playing for the Angels

...and his name is Gary Sheffield

Those of yoy that forget, Gary was on the Yanks for a few seasons. Gary did well for us, and after his brief stint in NY, he went to the Tigers, and the Tigers just released him.

Oh, yeah, and he had 499 HOME RUNS! So he needed one more, and the Tigers threw him out the window!

Fortunately, he's in better hands, but I don't know how he'll do for the Mets.

In other news, Jayson Werth is the Phillies 3rd outfielder, as Geoff Jenkins has been released.

Also, I don't know if you heard, but my friend 19dan19 may be including me in a new blog.
Posted by Jordan at 8:35 PM No comments:

You guys remember my second post was about a card show. Same show, same place, same vendors. Yeah, I know! I got some cool stuff, stuff that went from Random to WHA???

I also got cards from another guy, the same guy that had the 2003 packs last time with the Hamilton and Texiera rookies. I'm hoping for BETTER rookies.
We'll start with 2000 Topps-
279- Jeff Cirillo. Meh.
448- Rookie Stars Doug Mirabelli (Ugh), Ben Petrick (Who?), and Jayson Werth (PHILLIE!)
Now I'm satisfied, but not satisfied enough.
446- Rookie Stars of Matt Riley (Who?), Mark Mulder-
Stop right there! I don't even need to read the rest of the card, cause this is already good- wait.
On that same card is CC SABATHIA!!!!!
YEEEEAAAAAAHHHHH! Okay, now I'm done!
276- Mike Hampton on the Mets. Nice player.
325- Kirk Reuter. Who?
462- League Leaders of Mark McGwire and Ken Griffey Jr. This is a day full of McGwire!
265- Billy Koch. Who? Just some kid from Toronto- I mean, Le Blue Jays.
327- Doug Glanville. Who?
242- David Wells. The guy who the Yanks traded to get Clemens...and he's not too bad. He pitched a perfect game for us! Only on this card, he's back in Toronto- I mean, Le Jays
307- Eric Owens. Who?
406- Rick Helling. Old Ranger Unis, which they're bringing back, look ugly.
Checklist. Not on the player, or the combo.

Overall the packs were great. But then, another dealer had some 09 Topps and Heritage. And then I was in love.

Here's who I ended up getting, and all of these are guys I didn't have.
Heritage-
336- Paul Byrd. BOOOOOOO, and okay pitcher.
257- Mark Texiera. WOOOOOOOOOOO!
259- Kosuke Fukudome. What a name.
188- Joey Gathright. The Gath-fest rolls on from Thursday.
233- Kerry Wood- As well as the Wood-fest.
109- Delmon Young. And the Young Fest.
62- Greg Maddux- Don't forget the Maddux fest!
65- Pudge Rodriguez. Pudge looks old in a Yankee uni. Still, great player. Now on the Stros.
29- Johan Santana. Wow, great player, but on the same team that just snatched Sheffield.
33- Randy Johnson. Now on the Giants.

Great show, a lot going into my "Book". Hopefully, I'll be back in a few months- and maybe the same people will be there!
Posted by Jordan at 5:28 PM No comments:

I got 4 packs of what seems like the product to get this spring- Upper Deck. Looking for gimmicks, but I don't know what I'll find.

46- Josh Beckett. Good player, but BOOOOOOOOO!
11- Max Scherzer. He looks like a decent pitcher for the D-Backs.
39- Jay Payton. I don't know if he's still on the O's, but it would be nice.
74- Jon Leiber. Meh.
147- Dan Uggla. I have been getting a lot of Ugg's lately, and I don't mean boots.
140- Joel Zumaya. Nice closer for Detroit.
161- Brandon Backe. Pain in the Brandon Asse.
126- Miguel Cabrera. One of the best young players right now.
438- Padres Team Leaders- the same one I got two weeks ago. Sigh...
Starquest Derek Jeter Gold Rare. Heh, someone traded me this one a few weeks back. Tomorrow I'll give it back.
492- Grady Sizemore Checklist. An all around great card ruined by the fact that the checklists are on actual cards.
416- Dexter Fowler. I saw this guy play a the Futures Game Last Year, and he looks red hot.
231- Kevin Slowey? Who?
214- Ryan Braun. He doesn't look as lazy as he did on his Topps card, but still, the next big thing for Thorzul to brag about.
248- Moises Alou. He's okay, but he's not in my book.
343- Albert BLEEPING PUJOS! YEEAAAAAAHHHHHH!
303- Nate McLouth. He's a great player.
388- Vernon Wells. Awesome Outfielder from Le Blue Jays.

Overall, wonderful break, which means you'll be seeing more on this blog soon.
Posted by Jordan at 8:21 PM No comments:

On this day in history

This was the day that this guy

Was the reason that everyone yelled at their computers.
Thanks a lot Topps!
Posted by Jordan at 7:26 AM No comments: