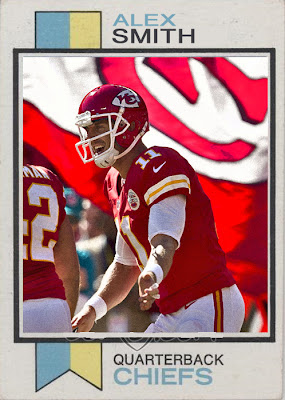 This card is awesome, and it signifies the fact that the Chiefs are absolutely killing things this year, which they deserve, after having an awful season last year. Today they have one of the toughest matchups of the year. It could make or break them. Then again, it's just another one of the games I have to predict.

Jets vs. Bills:
Who should win: Jets. How about the sudden ascent of the Jets, from being the worst team in the league to suddenly being awesome. The Bills have had their own decline, losing EJ Manuel and a lot more games. Now that the Jets have reestablished their awesomeness, they should probably win again here.
Who will win: Jets. The Jets just received Ed Reed, which would be another way of making their defense even stronger than it already was. Now that Reed has a team that he will (hopefully) enjoy playing on, there will be more possibilities to do the same amount of ass-kicking he had with Baltimore. And this is the perfect game to start.
Overall: Jets over Bills.

Ravens vs. Bears:
Oooh, this is a tough one.
Who should win: Ravens. Honestly, I'm only saying this because this is the team that should be winning here. You have an oddly declining Bears team, an oddly declining Ravens team, and a game that will probably be as close as last week's Ravens game. However, I'm saying the Ravens look worthy of a win here.
Who will win: Bears. The Bears have more talent, and tougher players this year than the Ravens, who are only 4-5 because they lost their two biggest defensive threats. It honestly could go either way, but I'm saying the Bears will take it.
Overall: Bears over Ravens, though I imagine it will be very close.

Browns vs. Bengals:
Who should win: Bengals, because they are headlining a very tough division, and a win here would break the division wide open. Besides, they are one of the best teams in the AFC, and I can only imagine what would happen if they make the playoffs.
Who will win: Bengals. Now that the whole October haze has settled, the Browns are easier to beat, and a much less difficult team. I know that they can still surprise on many occasions, yet I don't think today is going to be one of them.
Overall: Bengals over Browns.

Redskins vs. Eagles:
Who should win: Eagles. I know this is putting a lot of pressure on them, but now that the Eagles have a great quarterback, and now that the team has confidence after mowing down one of the best teams in the NFC, they are becoming one of the more underrated threats in the league. Today they play a team that got lucky three times. I doubt they will get lucky again this week.
Who will win: Eagles. And yes, I know what I'm asking for in predicting the Eagles will win, because they rarely ever. It's impossible to predict exactly what the Eagles will do, because they never seem to do it. Thankfully, Chip Kelly's back to throwing down, and hopefully this matchup will be another win for Philly, because dammit, it needs one.
Overall: Eagles over Skins.

Falcons vs. Buccaneers:
Who should win: Falcons. I know it's a stretch to say the Falcons can win anything this season, and I know they've really disappointed, and I know they're the NFC version of Houston, but hear me out. They still have more assets than a fledgling Tampa team, especially one with a rookie quarterback who is destined for a permanent backup position somewhere else.
Who will win; Falcons. This is really common sense. Even if the Falcons have lost so many games to so many lesser teams, and even if they're really crapped it out, they come nowhere near the ineptitude of the Bucs. Nowhere close.
Overall: Falcons over Bucs.

Cardinals vs. Jaguars:
Oh gosh, another really boring matchup.
Who should win: Cardinals I guess, judging by their record being actually kinda good and better than the Jags'.
Who will win: Cardinals, because they're playing the Jags, and it's very, very easy to take a win away from the Jags.
Overall: Cardinals over Jaguars.

Raiders vs. Texans:Who should win: Raiders. I know this is a stretch, but the Raiders right now are the better team. The Texans are absolutely going downhill, and there is really no shot of them putting together anything short of a failure. I mean, they're trying, I'll give them that, but the Raiders might actually have a chance to come out on top.
Who will win: Texans. The Raiders will be playing without Terrelle Pryor today. The injury that broke the Raider's back, it seems.
Overall: Texans over Raiders, embarrassingly.

Chargers vs. Dolphins:
Who should win: Chargers. The Dolphins have been slumping terribly lately, and it couldn't come at a worse time for the organization. The whole Jonathan Martin thing is a scary affair, and as someone who's been bullied before, I totally understand why it's so heartbreaking. Meanwhile, the Dolphins are against a team that is probably better than them, with no turmoil in the last few weeks.
Who will win: Chargers. Unless the Network calls into the Chargers' office and tells them to throw the game because they want to televise a huge Miami win and make it inspirational and throw a puppy in there and everything, this should be another win for Philip Rivers.
Overall: Chargers vs. Dolphins. No puppies.

49ers vs. Saints:
WOW. ANOTHER TOUGHIE.
Who should win: The Saints, because they've overcome so much this year already, and have stepped back up to the top again to become one of the better teams in the NFC. Of course, they are playing against the Niners, who are usually pretty damn tough, though I imagine they'll be able to slide through.
Who will win: Saints. This game will be incredibly close. Two standout defenses against each other. Two landmark offenses against each other. Two awesome quarterbacks against each other. A batcrap crazy coach against a less batcrap crazy coach. Honestly, I'm only putting the Saints here because I like them better, but it could really go either way.
Overall: Saints over Niners, by a few points.

Packers vs. Giants:
Who should win: Giants. The Giants have won three straight. The Packers have lost two straight. The Packers are without their best QB, and the Giants are with their best QB, only he throws a lot of interceptions. It really looks like the Giants could actually take this one...
Who will win: Packers. However, that's exactly what the Packers WANT you to think. They could actually have a really nice game, so long as the backup throws to the right people, and still puts on a great performance regardless of the circumstances. It might be the other way, but dammit, I want it to be this way.
Overall: Packers over Giants. Manning throws a hissy fit and runs out of Jersey in Archie's car.

8 PM GAME:
Chiefs vs. Broncos:
Who should win: Broncos. Regardless of their one loss, Peyton Manning has commandeered one of the strongest teams in the league, and has already built them up to be a definite playoff team, and a definite Super Bowl favorite, and it's only November. Really, the only time they lost was when Andrew Luck had an amazing game. Therefore...
Who will win: Chiefs. Alex Smith is going to have the best game of his career today. I mean, he has to. If not, the Broncos win. Smith needs to really push himself, and his team, if they wanna defeat these guys, because it is not easy. I think the Chiefs will finally become a 10-0 team. I honestly hope so.
Overall: Chiefs over Broncos.

So, those are my predictions. Hope at least some of them come true today.
Posted by Jordan at 12:12 PM
Labels: Alex Smith, Chiefs, Custom Cards, football, Predictions