Scott Rolen went to the Red for Edwin Encarnacion today, as the final seconds of the deadline crept up.

Also, Jerry Hairston was traded to the Yankees for a unknown catcher.
Posted by Jordan at 6:13 PM No comments:

Jake Peavy has been traded to the White Sox- for real this time. He will be swapped will up-and-comer Clay Richard and 3 other guys.

BTW, The Rolen deal needs his OK
Posted by Jordan at 4:51 PM No comments:

And that is all

This has been a surpisingly subtle day for the Yankees. Usually they're getting the good players at this point.

Victor Martinez the Red Soc (Once again, I apologize to my Indians fanatic of a friend)
Orlando Cabrera the Twin
Jarrod Washburn the Tiger
Adam LaRoche once again a Brave
Scott Rolen maybe the Red

And Halladay is sitting in his locker room, thanking God that he stayed in Canada.

And as the Paul McCartney music continues to play and as the rain starts to come down in New Jersey, I ask myself-

What have we learned?

And to quote Paul McCartney- "There is no end to what we've done together, but we can do it"

Posted by Jordan at 3:59 PM No comments:

Scott Rolen is probably going to be traded to the Reds if he doesn't cite the no-trade clause.

I am happily listening to Paul McCartney hoping that they Yankees don't get harmed.

Not only have the Red Sox acquired Victor Martinez for Justin Masterson and friends, they also were nice people and gave Adam LaRoche back to the Braves in exchange for Casey Kotchman, who I still need for my Series 1 set.

Orlando Cabrera has been dealt to Minnesota for a prospect.

Hey, remember at the beginning of the year when the A's got NOMAH, Cabrera and Holliday

BTW- Martinez deal drawing closer, not official yet.
Posted by Jordan at 3:30 PM No comments:

Jarrod Washburn, who I've always kept saying that the Yankees were supposed to get two years ago, was traded. Not to the Yankees, to the Tigers.

Also, Tom Gorzellany and that guy that JayBee said was "The Dean" for ONE DAY were traded to the Cubs.

The Red Sox are planning on trading Clay Buttholz to the Indians for Victor Martinez. There is where I question their ability. Are they just trading because they need better defense, better offense, or because they are the Red Sox and need to screw everything up anyway.
Posted by Jordan at 11:53 AM No comments:

My friend the Indians fan also happens to be a Red Sox fan. I feel sorry for what I am about to say.

How is it possible that someone as beefy as Man-ram or Papi could NOT be taking roids?

You know what this means? You do, right?

"Ladies and Gentlemen, your 2009 World Champions, the New York Met- I mean Yankees"
Posted by Jordan at 2:19 PM No comments:

Freddy Sanchez has been traded to the Giants.

I can't even do something for a great amount of time before another trade pops up!
Posted by Jordan at 8:55 PM No comments:

How it went down

I'm sitting in a resturant with my Indians-loving friend. ESPN is on one of the screens. We're talking about the Philly-Halladay deal, how it's never going to happen. I said to him "Well, if they don't need Halladay, who do they get?"

I hear a breaking news sound on the TV. Cliff Lee has just been traded to the Phillies for a few prospects.

My friend goes beserk. He cannot believe that his favorite pitcher had been traded to my fave team. We also hear that Jack Wilson has, as predicted, been traded as well, to the Mariners. For Ian Snell.

To quote Ice Cube, Today was a Good Day
Posted by Jordan at 8:14 PM No comments:

Matt Holliday was one of the smartest moves of the offseason, being traded to the A's for a few prospects and Huston Street.

Now, being as he hasn't been hitting, I saw him last night in the last game he'd ever play as an A.

I say if things have already gotten this wacky, who's next?
Posted by Jordan at 7:43 PM No comments:

The Red Sox seem to be trying to fight back.

Yes, we are ahead of them in the scores, but they want to win it. That being the case, they traded for Adam LaRoche and Chris Duncan.

Seriously, the Yankees could try to trade for a better outfielder. In that case, watch your back, Vernon Wells
Posted by Jordan at 7:26 AM No comments:

My thoughts on the LaRoche trade

(Hang in there, only one verse left)

Yo Ho, Yo Ho, the Pirates life for me
the HOF's graced our team
But it felt like a dream
Drink up, the laddies Yo Ho
But we'll trade them all
And soon we will fall
Like Balti- Drink up the laddies Yo Ho!

Goodbye LaRoche, Wilson, Snell and Sanchez. You will be missed...while the Pirates sink deeper into the Earth
Posted by Jordan at 5:35 PM No comments:

I found 2 Five dollar cartons of cards at Five Below. You know me. Any chance to get cards I take it, but this break has more of a chance of crap than anything I will ever buy. I will only tell you of the good stuff

They also gave me 2 packs of 1992 Studio. Pack 1 gave me another Matt Williams, a Doc Gooden, A NOLAN RYAN, Dale Murphy on the Phillies and Mark McGwire pre roid use. In pack 2 I got Baines on the A's, A heritage series insert of my man Mattingly, Andre Dawson, and Mo Dawg Vaughn

There were two packs of 1987 Topps in there, but I already have enough of the stuff, so traded it will be.

Well, that's it. I got so much crap out of that, but I ask myself...why did I buy it. Because in about a month, I will be going off to Lake George New York, where there's a card shop with even better mix packs. 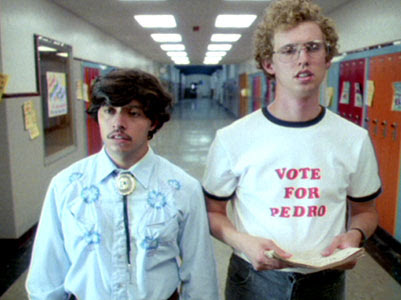 Vote for Pedro
No...not that Pedro--
I mean that Perdo Martinez will be joining the Phillies.
And now, my reaction.
...
WOOOOOOOOOOOO!
YEAAAAHHHHHH!
ALLLRIGGGGHHHTTTT!
...
Okay, I'm done.
Posted by Jordan at 12:12 PM No comments:

I was about to head out the mall's door when who did I see? Everbody's favorite money grubbing wax dealing octegenarian, The Wax Man!!!

Wow, that break sucked, but at least I got some good rookies instead of last time.
Posted by Jordan at 12:15 PM No comments:

Card Show- Sweetest Swag of all

Yes, after a break from collecting, I made a return to my local mall for a card show, with the usual suspects. We were missing the trivia guy, but we still got through with a lot of awesome cards.

First, one of the tables had a load of Series 2 I didn't have. I couldn't get Derek Jeter and Colby Rasmus due to lack of money. Here's the many series 2 cards I got.

411- Troy Tulowitski. Decent player who suffered a sophmore slump last year.
390- Joey Votto. Awesome player.
354- Mike Aviles. WHAT THE FRAK??? Look at the MSPaint error on this one! This is crazy!
465- Troy Glaus. Second banana at the moment to Mr. Pujols.
456- Jason Kendall. Not what he used to be...then again, he didn't used to be much.
454- Carlos Silva. Former Philly player.
452- Orlando Cabrera. I love this year's set because it has all the updated unis. For example, Orlando in an A's uni.
430- K-Rod. K-Rod in a mets Uni.
431- Ramon Hernandez in a Reds's uni...and LOOKING STRAIGHT AT YOOOOU!
385- Mike Jacobs in a Royals uni.
391- Dan Haren still in a D-Backs uni.
357- Huston Street in a Rockies uni.
367- Bobby Abreu in a Angels uni. Topps, you complete me...
247- Jason Bartlett. Been doing a lot for the Rays lately.
485- Aaron Rowand. This guy being one of the best ChiSox Outfielders in recent history says a lot about the team. Thankfully, he's on the Giants here.
484- Chris Carpenter. Not to be confused with Cris Carpenter, who sucked.
481- Nyjer Morgan. This Pirate was recently traded to Washington, which isn't like he's being demoted.
475- Larry Jones. Known to his friends as Chipper, known to Dayf as "CHIPPAH!"
473- Jered Weaver. Wow. Look at this card. Funniest pose of the year. Jeff who?
472- Bill Hall. Part of the stellar Brewers infield...i think.
470- Lance Berkman, who can't stay out of my hands lately.
458- Jeremy Hilary Bonderman
457- John Maine. The Mets are lucky.
435- Carlos Lee, the man who used to suck but somehow got changed in Houston.
425- Curtis Granderson.
415- Josh Beckett. This Beckett isn't as bad as the lousy price guide.
405- Todd Helton, Mountain Man.
394- Barry Zito. Somehow, the third best pitcher on the Giants.
386- Jonathan Papelbon. I have nothing to say about this jackass.
392- Brandon Phillips. Nice player.
332- Chone Figgins. Great player.
380-Aramis. (This is the card where they put his last name)
379- Howie Kendrick
365- Buherle bid gets the worm.
370- Victor Von Doom Martinez.
359- Jason Varitek. BOOOOOOOO!
487- Travis Hafner. Overshadowed by Grady Sizemore.
501- Jeff Suppan. I will need an entire class of college students to find out what the hell he's doing in this picture.
508- Kenji Johjima, More proof that Mike Sweeney is the lone American on this team.
515- Gary Sheffield. Just when I thought that Topps was updated, this card has him on the Tigers.
528- Nick Swisher. Tyring to be slick by slapping fives on his way to the plate. Slick, wish, slick. We traded for you, now we can trade you at will.
529- Fernando Rodney. Fernando has been absent from last year's set.
532- Garret Anderson. Topps regains my trust because Garret Top is on the Braves.
539- Miguel Olivo. Used to be good on the ChiSox and Marlins. Used to.
540- Russell Martin. In this picture, one of the ChiSox is knocking Russ's hat off. Aparently they hate Canadians.
541- Jason Bay. Speaking of Canadians...
550- Silly Beltran! The All Star Game is for kids...apparently Jayson Werth.
552- Eric Byrnes. Exxxxxcelent.
554- Adam LaRoche, probably the best player on the Pirates right now.
558- Edgar Renteria. Am I crazy or did Edgar already give us his series one offerning as a flying squirrel?
570- Davud DeJesus. DeJesus Christ!
574- Nate Schierholz. He's going to be great, I tell you! Listen to me!
580- Scott Kazmir.
587- Adam Dunn on the Nats.
585- Alexi Ramirez. Most Oddly shaped head in the MLB
594- Milton Bradley. Let's play Monopoly, which Milton is in.
605- Rick Ankiel. What a comeback.
610- Forever Young
621- Oliver Perez. Great player.
640- BJ Upton
649- Luke Hochevar, the future of the Royals bullpen
660- Jacoby Ellisbury.
656- Delmon Young, the future of the Twins.
Posted by Jordan at 11:28 AM No comments:

I might go to the local card shop tomorrow, so stay tuned for that...

Also, the Yankees got a former ROY turned Blob according to Night Owl of last year's series. Eric Hinske. Yeah, he sucks. Why did we agree to this again???
Posted by Jordan at 4:32 PM No comments: