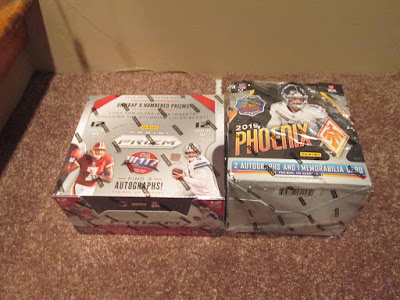 From 2011 until around 2014, there was...a sporadic but strong amount of football box breaks on this blog. I got them from an increasingly anonymous source, and they kept an effort going of promoting football cards during the season, and bringing light to products and companies that don't normally receive attention, especially from me.

Since Topps has left the football cards game, and Panini has...turned into Topps's baseball division, but for football, I figured it didn't make much sense to collect much football anymore. Also, it became incredibly tough to keep track of which pieces and players carry over in terms of efficiency from year to year, and from product to product. A player that appears in a Panini set one season may have a horrible season, become a backup and never get another card, and I'll never really figure it out until much later. It's not like baseball, where players ascend and descend at a more gradual rate. Football is insanely hard to collect, and in a card industry that definitely emphasizes premium products, I didn't think it made a lot of sense to keep going.

My anonymous source had other ideas.

I come home to these two boxes on my desk. 2019 Panini Prism. 2019 Panini Phoenix. One is relatively lower-end, the other is a high-end product. And I'm not gonna leave them unopened.

I'm obviously gonna break them for the blog. I've got to do a whole post on my trading anxiety, but if people want cards from these, I can figure out how to send them out. Tomorrow or Thursday, expect the first part of Phoenix.
Posted by Jordan at 8:47 PM
Labels: box break, football, Panini