Today I found a package in the mail that I had been waiting for for a week. I had been in Florida for the past few days, working with my dad on a shoot (more details on that later). I saw that my winnings from Crinkly Wrappers' contest had arrived. Inside would be a card from every Topps set since 1952, and some Yankees stuff.

And now, my account of every Topps card pulled from the package, in chronological order-

Wow. That was awesome. I hope My Mother doesn't throw out those cards. Thank you Crinkly Wrappers for the awesome contest winnings.They will be great in my collection.

Speaking of contests, there may be one coming on this blog in the next month. Maybe...
Posted by Jordan at 6:46 PM No comments:
Labels: Cards your mother threw out, contest, Crinkly Wrappers, free cards, trade

Today, more than 2 years after starting the blog, I've reached 500 posts. I know, I'm not the most consistent poster, but at least when the season kicks in I'll be making a lot of customs. Right now, I have the 4 pack + a code card thing, and 2 rack packs, all full of Series 1.

This thing contained a code card. Let's see who I get:
1989 Bob Melvin of the San Francisco Giants. Eh, at least I've heard of him, but it's still 89 Topps.

Rack Pack 1-
(The first part of this pack contained 11 base cards I already had. Grrrrr
Jimmie Foxx 1934 Goudey thing
Pedrioa TT
(The rest of that section has 4 more doubles. Why did I even bother?
209- Carlos Santana. Wow, a card I don't have!
(This was followed by 7 cards I did have. Crap)
125- Evan Meek, #'d to 2011.
Jeff Keppinger Shiny Card.
mini
Ike Davis and Ryan Braun
Tommy Hanson Topps 60
Carlton Fisk reprint
119- Jason Bay.
220- Todd Helton
(This pack was played off by 3 cards I did have. Worst rack pack ever)

Well, there you have it. A few good packs and a crappy one. But still, 500 posts of okay sports blogging can amount to things like that.
Posted by Jordan at 12:30 PM 2 comments:
Labels: 3/4 Pack Extravaganza, Topps 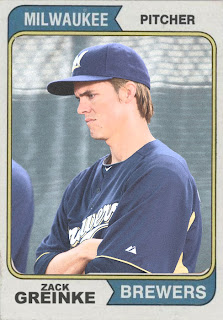 Now that Million Card Giveaway seems to be drawing to a close, Topps has opened up its Diamond Giveaway, which in no way is to be confused with the Million Card Giveaway. So far, all I've been seeing on the blogosphere is old 80's and 90's cards. Let's hope I get something better.

Redeemed- 1974 Don Hood of the Baltimore Orioles. I'll take it. It's not huge, but it's not a Bip Roberts.

Redeemed- BLUHHH! 1994 Domingo Jean of the New York Yankees, Future Star. GYAAAH, WHYYY? It's a Yankee, but it's a crappy Yankee.

In the year to come, I'll be monkeying around with this thing a lot more, and hopefully I'll enjoy doing so.
Posted by Jordan at 3:10 PM No comments:
Labels: Diamond Giveaway, Topps

After a long night, I ventured out to my local Target, Knowing that they had some Series 1. As I rounded the aises, I saw Robinson Cano's body emrege from the packs, and I knew I'd be getting some today. I smiled as I got SIX Packs, and TWO rack packs.

All in all, great packs. If there are any Red Sox fans that would like to take the Papelbon, drop me a line, email on the sidebar. Also, if anyone is collecting the Kimball's Champions mini set, and want some of those, I have a few from today that I don't want.
Posted by Jordan at 8:32 PM No comments:
Labels: 2011, 3/4 Pack Extravaganza, Target, Topps

On February 9th 2009, I was already familiar with the blogosphere. I was also a steady collector, and wanted to join my "idols", and create a blog. So, that day Cards that Ruth Built was born. However, my friend Dan told me it was too corny, so I changed it to Mint Condition. It was a small blog, but it soon built up to...yep, still a small blog.

But still, two years ago today, I became a blogger. It was different 2 years ago. Nobody had ever heard of Stephen Strasburg, Eisner was still ahead of Topps, Upper Deck was still in existence and Wax Heaven was still active. These are different times now, but I'm glad that I wasn't one to stop, or move on with my life. I've kept going for two years now.

As for my future, once Spring Training begins, Custom shots will come out, so the Custom cards will return. And soon, once Series 1 comes out, I'll be going back to ripping. But still...it's been a fun two years, and hopefully I'll be around for a lot longer.
Posted by Jordan at 9:15 PM 6 comments:

Yesterday, being that I was in Dallas the day before the Super Bowl, I ventured out to the NFL Experience, which is basically Comic Con for Football. Topps had a boooth, and had a bunch of football cards on sale. However, my dad works with a guy who also works with Topps, and does some business with them. So all we had to do was say the word, and Topps would give us some swag. Well, thanks to the very nice people at the Topps booth, we were given three hobby boxes:

Delightfully, I ripped all three. Here are my reports from the box breaks:

Chrome:
You know the deal. Chrome was crappy this year because some of the cards were bent. Still, I was guaranteed a bunch of refractors, inserts and an auto.

Overall: Not too bad. At least I've heard of Edwards, but I could've done better.

Prime:
This product is the definition of a premium set. There were no packs, there were heavily protected mondo packets. I regard these as "Cards for the Kings". I was guaranteed 1 Auto, 2 relics and 1 auto/relic.

Overall: Not bad at all. That Quad relic is going to be worth a lot if all of them are great. Good box.

Magic:
This is not a set for relics and autos- this is mainly about design and collectability. I wasn't caring about the hits, mainly because I love this set because of the design, and the packs.

Overall: Very nice set, and impressed with not only the Lynch auto, but the Peterson numbered.

Thank you to Topps for supplying me with these boxes, aall three were very good, exactly what I expect from Topps.

(BTW- If you're interested in any of these cards, drop me a line. I can decline, if I want to keep some. But if you really want one for your team collection, I can make that happen.

And before you ask, yes, that means what you all think it means. I'm going to the Super Bowl.

I'm not going to bring up how the tickets were waved in my direction, but lets just say someone I know very well had relations, and we got lucky. The seats are pretty good, but it will be loud as hell, I know for sure.

I've known about this one for a few months now, but waited until today to spill it, mainly because I didn't wanna look like a jackass by telling everyone in December.

I'll be leaving tomorrow, and attending the NFL Expirience tomorrow as well. Sources tell me that Topps has a booth, so I will be sure to check that one out.

And after I get back, I'll be finding some 2011 series one, and ripping that. And sometime after that, when Spring Training starts, Custom Cards will return.

But, I hope you don't hate me by "bragging" that I'm going to the Super Bowl. After all, I have to sit through the friggin Black Eyed Peas at halftime. It couldn't be anyone tolerable, like Green Day, or Bon Jovi- hell, I'd even had settled for Dave Matthews. NOOOOO...The Black Eyed Peas, and their partying image. Terrific.
Posted by Jordan at 4:19 PM 2 comments:
Labels: Super Bowl 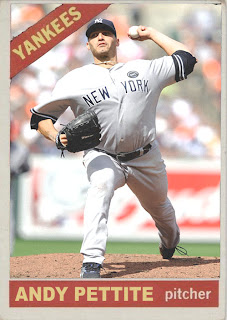 You may not be headed to Cooperstown, but the Bronx will remember you for years to come.
Thanks for 12 decent seasons...and for not retiring like you said you would after the 07, 08 and 09 seasons.
Posted by Jordan at 3:35 PM No comments:
Labels: Andy Pettite, retired, Yankees
Newer Posts Older Posts Home
Subscribe to: Posts (Atom)