I get to be geeky and make a stalegum-esque reference to my favorite semi-scary movies...only card related

Well, the Yankees season is dead... They've got no chance left
"Oh Herr Doctor, I'm so sorry"
"No no, be of good cheer. If baseball teaches us anything, it's to accept our successes, and our failures, with quiet dignity and grace"

"SON OF A GUN WE WERE SO CLOSE! TEXIERA WAS RIGHT THERE AND WE HAD JETER'S HOMER! IT SHOULDN'TVE HIT THE CAMERA! GIRARDI...WHAT DID YOU DO TO ME? WHAT DID YOU DO TO ME?"
"Stop it! You'll kill their 2010 season!"
"I DON'T WANT TO ROOT FOR THE YANKEES! I'LL JUST TAKE THE INDIANS!!!!"
"Quiet dignity and grace!"
"OH...OLD FRANKENSTEINBRENNER! (zing!) Oh...mommy!

Have a happy halloween, at least for the rest of the night (Too late? Eh, forget it then)

(Did I just jump the shark?)
Posted by Jordan at 10:37 PM No comments:
Labels: Yankees, Young Frankenstein

How it all happened

I was in Yankee Stadium last night, for the game, getting Ice Cream with my dad. We were just getting back, and Texeira was up. The moment we walk downstairs, we see Texiera hit the homer and we got absolutely wild, ice cream everywhere and everything.

Let's just say I was a little excited. I mean, my team's hero just hit a tying homer and the homer that would eventually lead to the 3-1 win. I was quite happy back there

Needless to say, it was a great game. Forget about being late for the train (which I was), it was still a hell of a game

So how do I follow up such a great game?

How about 4 Packs of Updates and Highlights that I shamelessly nabbed from the stadium just because I felt like it?

164- Brett "I was traded for Ken Griffey" Tomko
35- Tom Gorzellany. Yeah, on the cubs. But still kinda ugly
229- Kevin Millar on the Blue Jays
329- Curtis Granderson All Star
237- Dustin Pedroia All Star
81- Mark Texiera all star.
Legends of the Game Paul Molitor... on the Twins
Russ Martin Topps Town
279- Ross Detwiler, who sounds like a character from Animal House
99- Kevin Gregg. Okay, granted, Cubs collectors might want this one. But really, he's just a releiver. He's no Mariano Rivera
83- Emilio Bonifacio
97- Juan (Not Fidel) Castro

Okay, so it was a great game, and the packs are here to show it.
Posted by Jordan at 10:33 AM No comments:
Labels: 3/4 Pack Extravaganza, Phillies, Yankees

If anyone needs me tonight...

I'll be doing something really important in New York. There is apparently something big going down in the Bronx, and I need to check it out

(Yeah, I'll be there for Game 2. It is as awesome as it sounds)
Posted by Jordan at 3:42 PM 1 comment:
Labels: Turnpike Series Baby 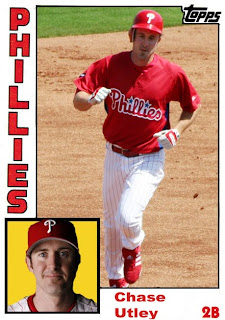 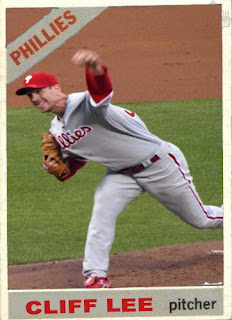 Why this is going to be the biggest World Series Ever

A- No Dodgers, Red Sox, Mets or Cardinals
B- Kendry Morales will be at home degreasing his glove
C- Joe Girardi will get up to meet Uncle Cholly and realize how dead he looks in comparison.
D- We will finally have a series where this guy 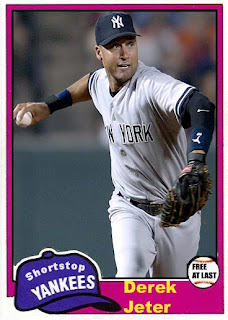 plays against this guy. 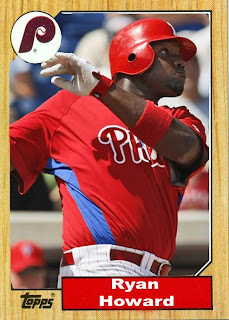 WHY DID THE YANKEES LOSE LAST NIGHT! SWEET MOTHER OF GOD THAT WAS A CRAPPY GAME! I FEEL LIKE I WANT TO TAKE THAT FRIGGING RALLY MONKEY AND FLUSH IT DOWN THE FRICKING TOILET!!! I FEEL SO GRUMPY!!!
Here's some bleeping custom cards 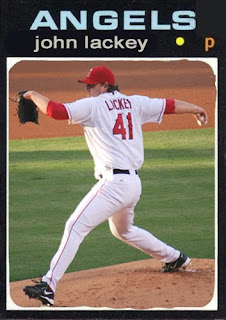 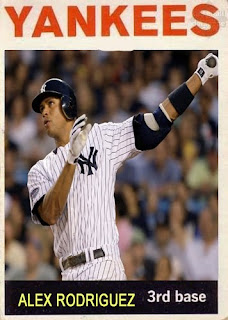 Back in February, when Philadelphia's sole...real offseason effort was grabbing Raul Ibanez in place of Burrell, it didn't look like the Phillies had much hope. Then we started winning. Then Raul became a superstar in Philly. Then we slowly morphed into the NL champs.
Wow. I was going crazy last night after the game. And if they win the whole thing again, my city will sleep knowing that their heroes have fufilled their destiny. 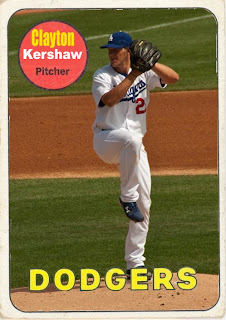 Kershaw did pretty well in the playoffs this year. Thome's first postseason effort on the Dodgers was a good one
And now, some Phillies!!! 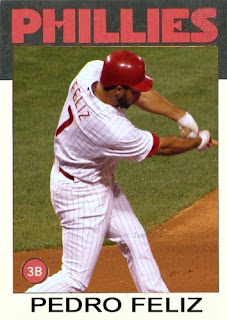 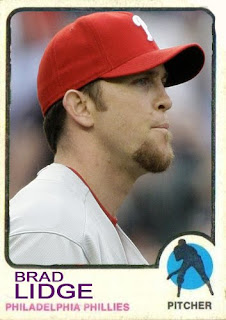 What a game last night!!! 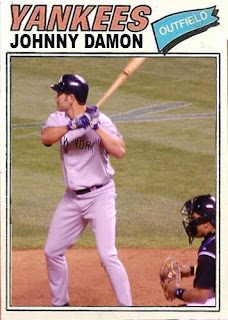 This guy might not have been the hero of the game, but I'm working on an A-rod for you guys... 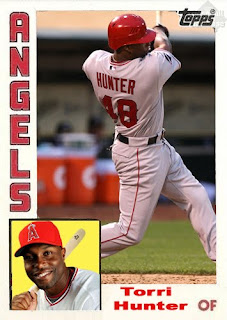 And we have last night's lovable loser- Torii Hunter, whose name I know I mispelled. I'm sorry, that is, if Mr. Hunter actually read this blog (Which is unlikely)
One more game, boys!
Posted by Jordan at 7:50 AM 1 comment:

What they were all thinking last night 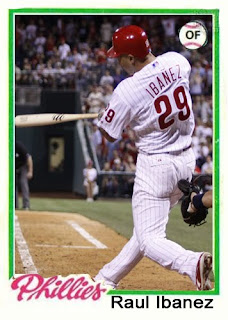 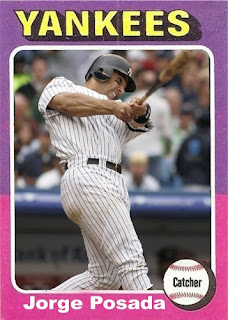 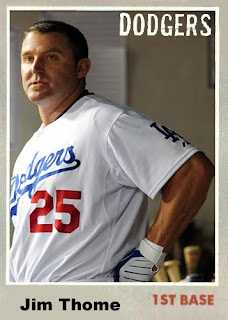 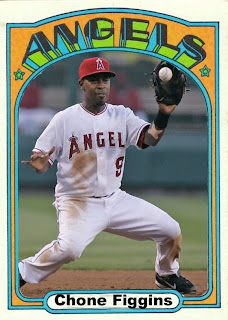 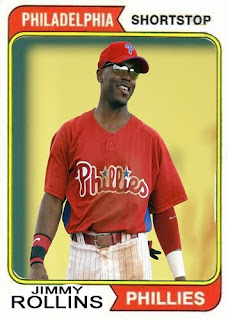 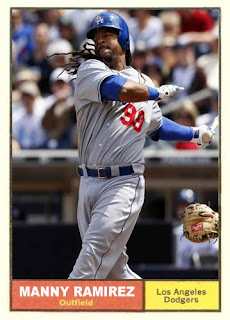 0
What a game. Man, if every playoff game is going to be like this, then we're in for a hell of a World Series
Posted by Jordan at 7:18 AM No comments:
Labels: Dodgers, Jimmy Rollins, Manny Ramirez, Phillies

More Customs for ya! 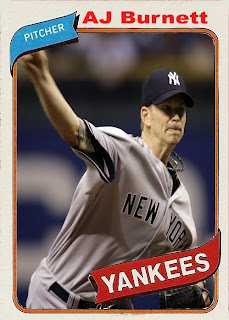 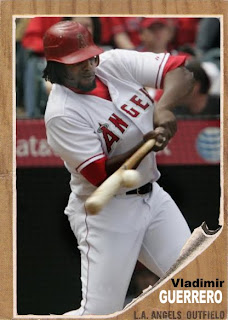 Defeat!!
What a game last night. A-Rod's homer made me truly believe that we can end the decade like we started it. Oh, man. Phillies tomorrow night. This better be good.
Posted by Jordan at 11:39 AM No comments:
Labels: AJ Burnett, Angels, Vladimir Guerrero, Yankees 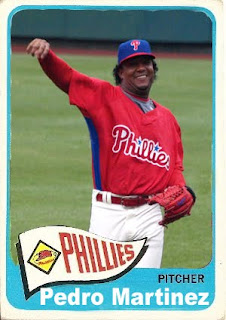 Yep, by popular demand, the Custom Cards are back, starting with Pedro over here. More to come in the next few days
Posted by Jordan at 7:11 PM No comments:
Labels: Custom Cards, Pedro Martinez, Phillies

Yeah, I went to another card show. Luckily, I finally got my hands on some UPDATES AND HIGHLIGHTS!!!! Here are some of the awesome cards I got from this set-

Yeah, I saw the game last night. Pretty good effort by the Dodgers, but there is no way that anything could've stopped Raul's three runner last night.

Well this is a first

Both my teams are headed to their respective CS's. Wouldn't it be funny if it was Yankees/Phillies in the series?

New York would get killed?

All right.
Posted by Jordan at 7:40 AM No comments:
Labels: Phillies, Yankees

Why this year's ALCS is totally going to rock

Let's see here, we have 3 of the biggest names in the game
(Jeter, Arod, Vladdie)

We have a bulky outfielder
(Damon, Abreu)

I think I just blued myself
Posted by Jordan at 7:31 AM No comments:
Labels: Angels, Yankees 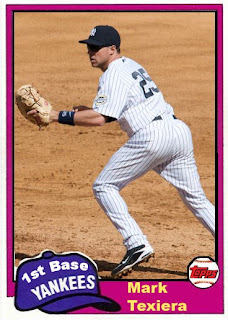 This is one of my oldies, but I thought I'd repost the card being that he's become a true legend for the team. Anyone who saw that game last night has to agree with me. It's the home run that really mattered in the game, not Arods, but his.

And another thing- a certain feature on this blog will be coming back soon.
Posted by Jordan at 10:41 AM No comments:
Labels: Custom Cards, Mark Texiera

Baby Hamels on the night of the loss?

(I do realize I haven't posted cards in a while. Yeah,I'll get some cards soon)
Posted by Jordan at 9:45 AM No comments:
Labels: Phillies

The one pitcher that we got this year and thought he was going to suck for the Phillies pulled through last night, and the most reliable pitcher sucked tonight.

And you may tell yourself, these are not my beautiful Phillies!
Posted by Jordan at 9:40 PM No comments:
Labels: Phillies

Lets ask our anchor in the field, Ollie Williams. Ollie?

Thanks Ollie. Now over to Asian Reporter Tricia Takanawa in the Twins dugout

This is all you need to know about last night's game.
Posted by Jordan at 3:40 PM No comments:
Labels: Family Guy, Twins, Yankees

And now a conversation between fans at Game 1 in Philly

"What state are you from?"
"Colorado"
"Only two things come from Colorado! Mountains...and that's about it!!!"
"Yeah? Well only...five million things come out of Philadelphia"
"FAAAAIL!"

...And that, fellow readers, is how the Phillies won today.

Now lets see how the bribe with Minnesota goes.
Posted by Jordan at 7:05 PM No comments:
Labels: Phillies, Rockies, Twins

So now it looks like Drunky McGee is going back to his "You've got some splaining to do!!!" wife and 4 months of relaxation...that is, until he's traded. Meanwhile, the Twins are playing the Yankees tonight, and Of COOOOURSE I'll watch it. The fate of the world hangs in the balance here!

Also, I don't know if you guys have noticed, but a certain quarterback that I like broke a certain record he's been chasing. More on that story later.
Posted by Jordan at 7:31 AM No comments:
Labels: Tigers, Twins

...But that Gatorade looks a little bad. Maybe you should- oh...okay, so it's perscription brand Gatorade. That make it excuseable. Go about your business drinking"

(P.S.- Just cause of that, I hope we play you Tigers in the playoffs)
Posted by Jordan at 6:06 PM No comments:
Labels: Miguel Cabrera, Miller Time, Tigers

You all saw my take on the new Topps design yesterday, now here's some more Topps bashing.

I will pull a Night Owl and define next year's design-


Yeah, it sucks.
Posted by Jordan at 1:08 PM No comments:
Labels: Design is everything

Why it's going to be big in the playoffs

Just take a look who's on the guest list-

This will be big.
Posted by Jordan at 7:41 AM No comments:
Labels: Playoffs? They can't even play a game
Newer Posts Older Posts Home
Subscribe to: Posts (Atom)