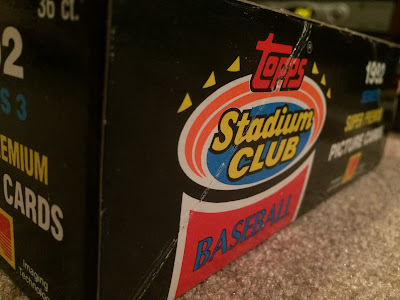 I gave the last third of the box a little room to breathe, so now we're onto Part 2 of Series 3. If you missed Part 1, to recap...this box is actually pretty nice on collation so far. That's basically it. 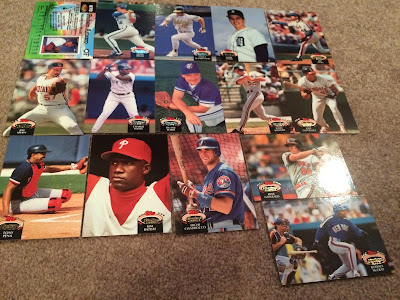 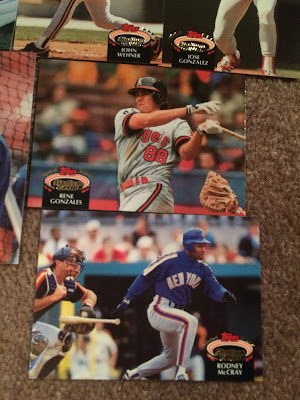 The landscapes in this one are great, because you see a lot more of the picture (figuratively) by zooming out, like the catcher's mitt and bat-end (in Gonzales'), and the hustling catcher avoiding the flying bat in McCray's. 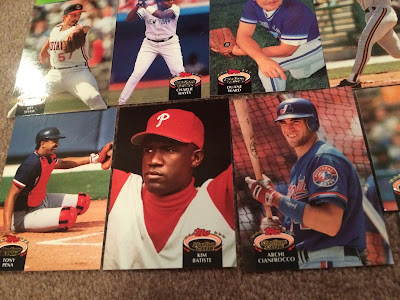 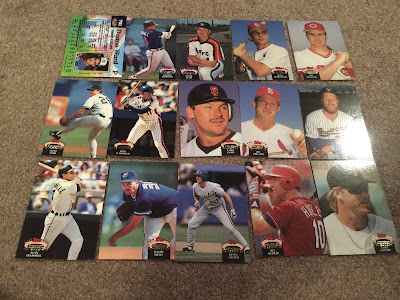 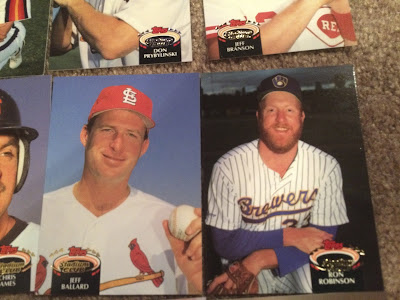 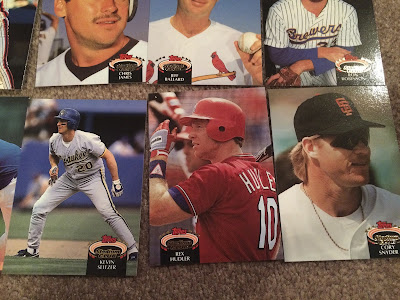 Seitzer's on the move, Hudler's looking out in the cage, Snyder's wondering why he sucks. 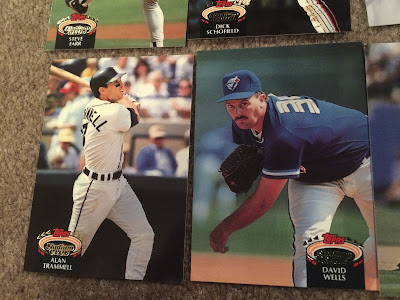 Alan Trammell...that's actually a pretty nice shot. Lots of emphasis on white. Wells' has the right amount of concentration. 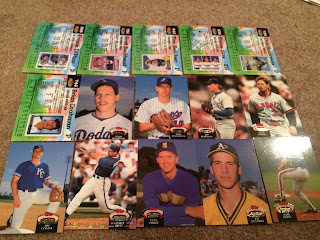 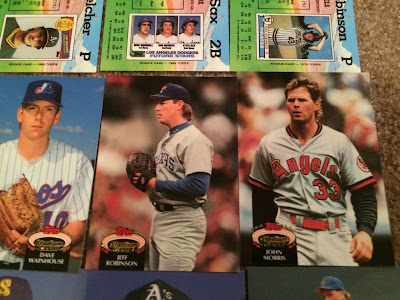 A lot of the shots in this are very waist-up. Morris' has a ton of detail on the jersey, which is nice. 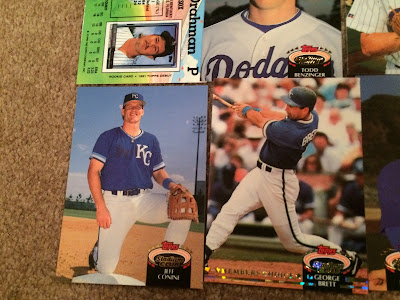 I don't know why, but I really, really like Jeff Conine's card. Just something about how smiley he is, in that position.
Also, George Brett nabs the Member's Choice card for the pack. 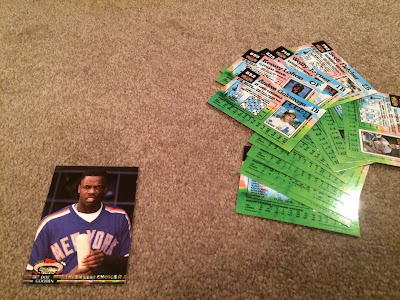 Pack 16-
Doc Gooden's Member's Choice is the only card I needed out of this pack. Yaaayyy... 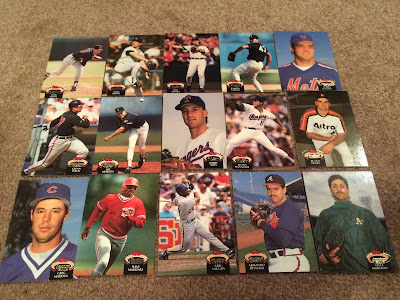 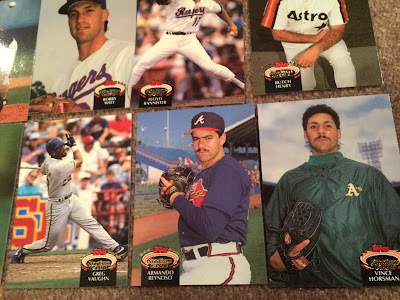 Vaughn's in the process of hitting one out, which...he did in the 90's quite a bit. Reynoso looks really stern. Vince Horsman's card is one of the sillier ones I've seen, between the mustache, the jacket, the expression, and what I believe is a smudge on his upper cheek. 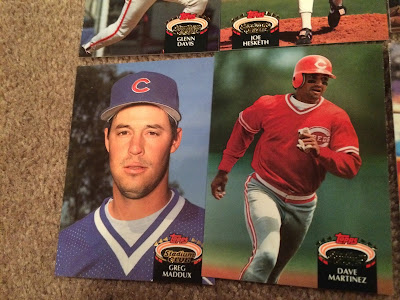 Greg Maddux looks really tired here- maybe a trade to Atlanta will wake him up a bit. Meanwhile, I forgot Dave Martinez played for the Reds for a sec. 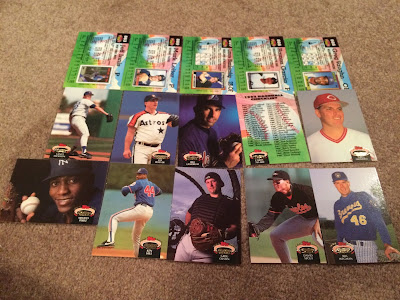 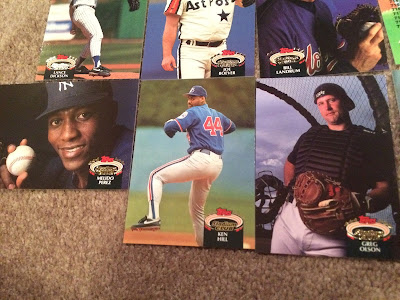 Melido Perez looks impressive as a Yankee, for one of the only times. Ken Hill's actually got a nice shot here, as does Greg Olson, looking way too casual for a backup catcher. 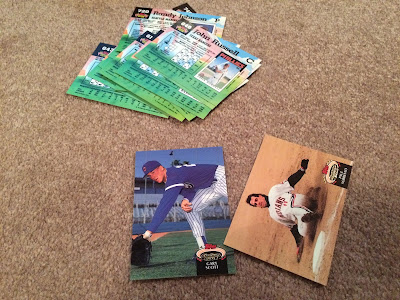 Pack 19- Only needed two cards from this one, including that cool Indians slide one. 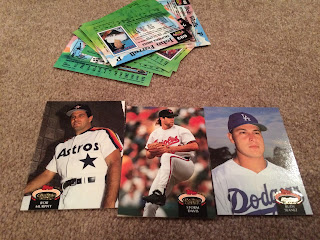 Pack 20- Annnnd only needed three cards here, including Storm Davis. Man, this box is beginning to wear off. 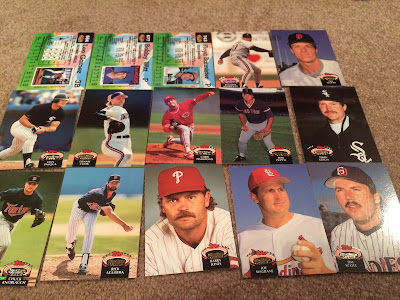 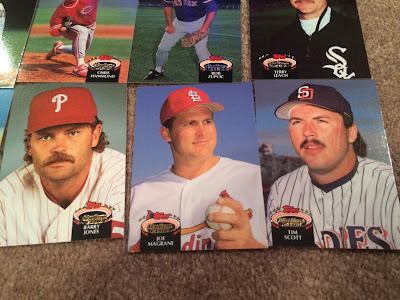 Barry Jones looks catatonic, Joe Magrane's wondering if anybody else is seeing that, and Tim Scott...I think he's watching a bird or something. 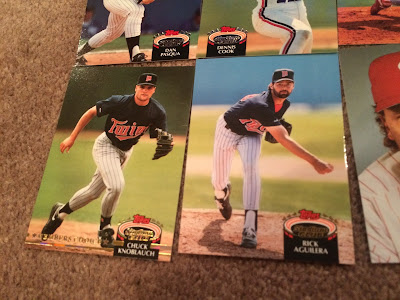 Two Twins stars. Knoblauch was already a Member's Choice option, while Aguilera was just getting warmed up. 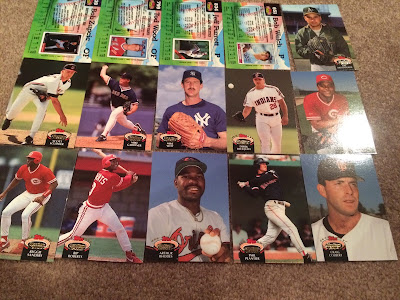 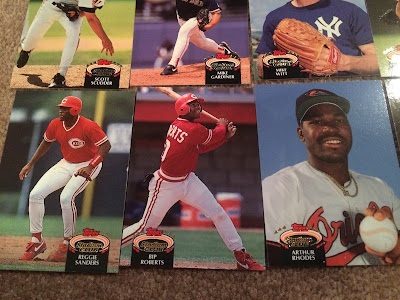 Reggie as a Red, BIP being Bip, and Arthur Rhodes reminding us all what a baseball looks like. 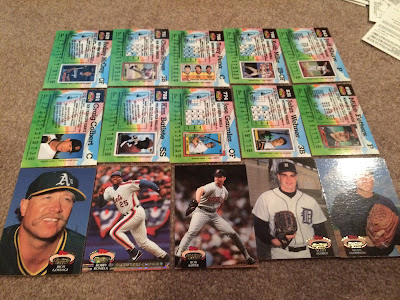 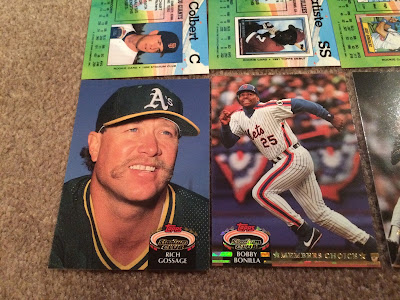 Goose as an A, which is a sight you don't see everyday. Looks great there.
Bobby Bonilla was a Member's Choice, which...is kind of odd, even for 1992. 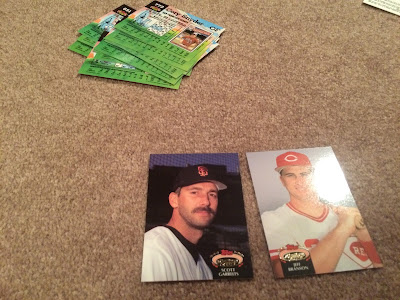 Pack 24- Only needed these two.

Well...the bottom just fell out of this box. The dupes are coming in full force, and it's probably gonna be a sticky end to the box.