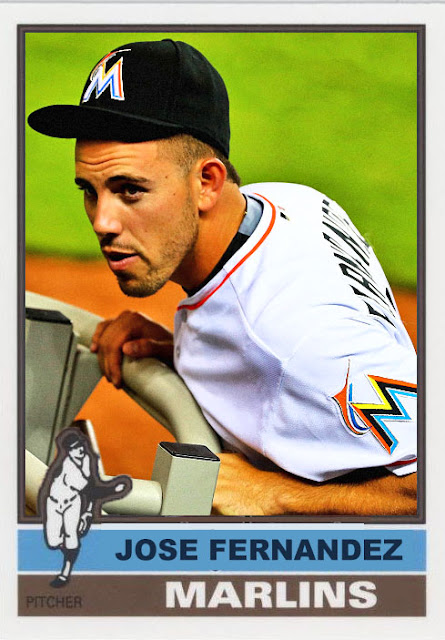 Look, some things are hazy and indistinct here, because the Marlins, as a third-place team, haven't made it known whether they want to buy or sell for the playoffs. They have a nice enough team, but also, they're behind the Mets AND the Nats, both of whom have better shots at first. Wild card isn't especially an option either, as the Pirates, Cardinals and Dodgers will also be up for that.

So...we're assuming, for the purpose of this post, that the Nationals will be going into July needing to sell. So...Jose Fernandez will most likely be up for grabs.

Like with Jonathan Lucroy earlier this month, we're gonna go over all the possible options of where he could end up, by the people who might NEED him to compete.

Red Sox: 3 to 2. The most likely option, because if it's one thing the Boston Red Sox are lacking in right now, it's pitching. Yes, David Price, Rick Porcello and Steven Wright can get you far, but only so far, and the lack of pitching depth has cost them a ton, with Eduardo Rodriguez, Clay Buchholz, Joe Kelly and Roenis Elias all disappointing. If they want to outdo the Orioles, they need a surefire addition to the pitching staff, and Fernandez would absolutely SOAR in Boston. The downside is that they might also go for Jonathan Lucroy, though Christian Vazquez has become more serviceable as of late.

Dodgers: 2 to 1. Depending on whether or not the Dodgers want to compete with the inevitability of this being an even year, or if Urias, Stripling, Bolsinger and Brett Anderson aren't ready, they can grab Fernandez. This is actually pretty likely, and would definitely help the team, especially seeing as Clayton Kershaw and Kenta Maeda have been the only two consistent pitching threats on the team- this would put them over the top, and make them seriously pursue the wild card more than anyone else. Of course, whether or not the batting order is up to par is up to them.

Royals: 3 to 1. If the Royals do make a run at getting back at the postseason, they'll need to do what they did last year and make VAST improvements to the pitching staff, because it's been keeping them back big time this year. Ventura, Volquez, Young and co. have been pretty atrocious so far, with only Ian Kennedy keeping them alive. Fernandez could be a nice bet, but it's unclear whether or not they'll need to make the run for it, if they're still at this point by July.

Orioles: 4 to 1. Look, if they're still in playoff position by July 31st, they can do whatever the hell they want. Yes, Chris Tillman, Kevin Gausman and Tyler Wilson are fine, and hopefully by that point Yovani Gallardo will be back to his old tricks, but there's not a ton of depth, and Ubaldo Jimenez is back to being absolutely atrocious. They could definitely throw Fernandez in there if they wanted to make a run at Boston, but it's a pretty big if, and it might hurt them if they go for a 2nd act next year.

Indians: 6 to 1. This one's pretty unlikely, but if something happens to one of the furious five, they're still at the top and they're in serious danger of sinking, nabbing Fernandez, or at least some pitcher, would be one of the few ways of ensuring passage to the postseason, because I'm sure Francona and co want to do everything in their power to keep the lightning from getting out of the bottle. Besides, Fernandez in Cleveland, in the same rotation as Carlos Carrasco, Corey Kluber and Danny Salazar? A fan can dream, can't he?

Nationals: 7 to 1. The Nats would clearly use this as a cockblock move, and they'd probably trade some bigger guns like Tanner Roark and Trea Turner to get him. Scherzer-Strasburg-Fernandez-Gonzalez-Roark/Ross would actually be pretty scary, albeit unlikely. Again, Washington would only do this if the pitching staff was in dire need, or if Strasburg was still on the DL by that point.
(UPDATE, HOURS LATER: Well, Lucas Giolito's starting tonight, so I'm doubting they'll go for Fernandez nowwwww...)

Look, maybe they keep him, maybe nothing happens, but...it's always nice to conspire a bit early.

Coming Tonight: Hard-hitting outfielder from the feel-good team of the AL. Might be an All-Star this year.
Posted by Jordan at 10:37 AM
Labels: Custom Cards, Jose Fernandez, Marlins, Red Sox, trade