What To Do When Your Sentimental Favorite Retires 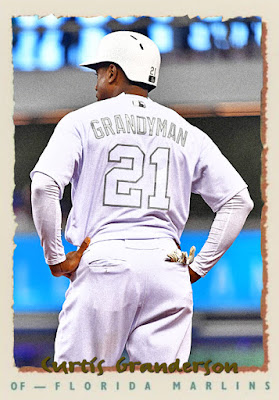 It's not like I didn't see Curtis Granderson's retirement coming. I mean, after last season, it was kind of inevitable, and the Marlins were basically keeping him around for the mythology rather than the talent. But either way, logging onto ESPN today and seeing that Grandy had finally hung up his cleats...hurt.

I have no idea why Granderson, of all people, spoke to me, but something about his Yankees era, especially his 41-homer 2011, just made me happy to have him around. My dad always worried that his status as a slap-hitter and strikeout-prone batter would doom him to a shorter shelf life, but even if that was the case, I welcomed every moment of his tenure in the Bronx, especially during the postseason, where he averaged .232 as a Yankee, bolstered by his insane numbers in the 2010 postseason. Also, it helped that Topps made a ton of cards of him as a Yankee, and I stockpiled as many of them as possible.

Like other players I've rooted for, changing teams didn't exactly hurt the overall legend for me. It helps that I don't hate the Mets as much as most Philly residents do, but seeing him continue his hard-hitting ways in Queens also helped, and I did get to see him play at Citifield in 2015, where he proceeded to reward my fandom by knocking a homer off of Shawn Kelley. In a game where Syndergaard had a no-no into the 7th, seeing Grandy have the best day of anybody in the Mets lineup was definitely a pick-me up. It was even cooler seeing him in the World Series that year, and seeing him knock 3 homers over the 5 games.

Granderson bopped around a bit for his last few seasons, joining postseason efforts in LA and Milwaukee, neither of which amounted to a Topps card (rrrrrrgh), but my fondest memory of his waning years was, again, one I was present for, in 2018. During a game in Toronto, the novelty of Grandy wearing a Jays jersey wore off quickly, as he proceeded to go 4-for-5 against the Orioles, including a home run, and SIX RBIs. It was almost as if he knew I was there, and he knew I'd be wanting him to do something awesome. In addition to the Yankees #14 jersey, I also have a Jays #18 shirt, and I plan on wearing one of them tonight.

The coolest part about Curtis Granderson is the nationwide respect that pretty much everyone has for him. He's a humanitarian on and off the field, having won the Clemente award in 2016. He's also one of those genuinely humble baseball presences who people just want to have on the team. Last year, he may have struggled to hit above .200, but no one dared send him down. Just having him on a young-leaning team, spitting out nuggets of goodwill was enough for Don Mattingly.